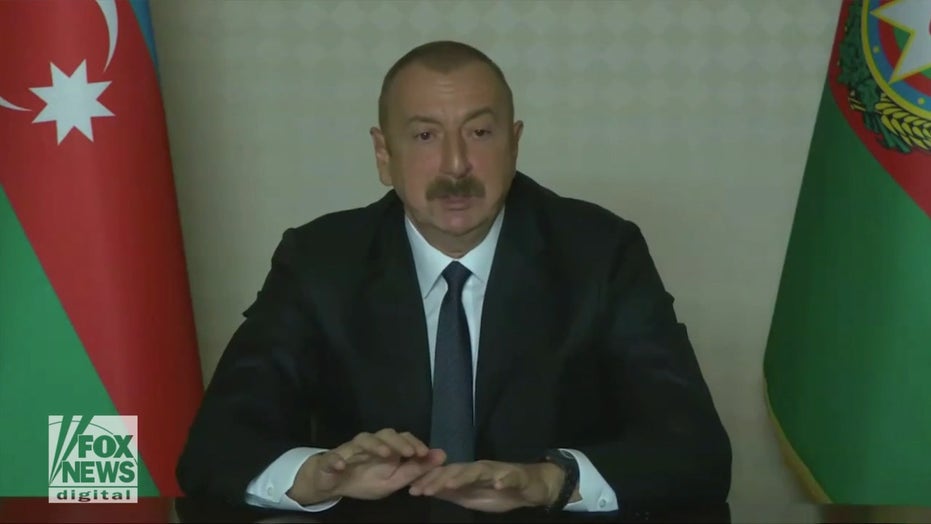 Ilham Aliyev, President of Azerbaijan, spoke to Fox News about conditions for a cease-fire with Armenia over the disputed Nagorno-Karabakh territory.

A third ceasefire agreement has been reached in the disputed Nagorno-Karabakh region, as Armenia and Azerbaijan both agreed Sunday to stop the deadly fighting that’s continued for four weeks.

A humanitarian ceasefire will begin at 8 a.m. local time (12:00 a.m. EDT), the governments of the United States of America, the Republic of Armenia, and the Republic of Azerbaijan said in a joint statement.

DEATH TOLL SOARS AS ARMENIA-AZERBAIJAN CONFLICT ESCALATES: 'THIS IS JUST A FIGHT AGAINST JIHADISTS'

After taking the stage at a campaign stop in New Hampshire, President Trump tweeted his congratulations Sunday to the Armenian Prime Minister Nikol Pashinyan and Azerbaijani President Ilham Aliyev, “who just agreed to adhere to a cease fire effective at midnight.”

“Many lives will be saved,” Trump wrote, adding that he was “proud of my team,” including Secretary of State Mike Pompeo, Deputy Secretary of State Stephen E. Biegun, and the White House's National Security Council, for “getting the deal done!”

The deal brokered by the U.S. comes after Armenian Foreign Minister Zohrab Mnatsakanyan and Azerbaijani Foreign Minister Jeyhun Bayramov met with Biegun on Saturday in Washington, D.C. Russia has tried to broker a ceasefire in the region twice before this month, but both frayed immediately, as both Armenia and Azerbaijan accused each other of violations.

This time, the U.S. “facilitated intensive negotiations among the Foreign Ministers and the Minsk Group Co-Chairs to move Armenia and Azerbaijan closer to a peaceful resolution of the Nagorno-Karabakh conflict,” according to the statement released by the State Department on Sunday. 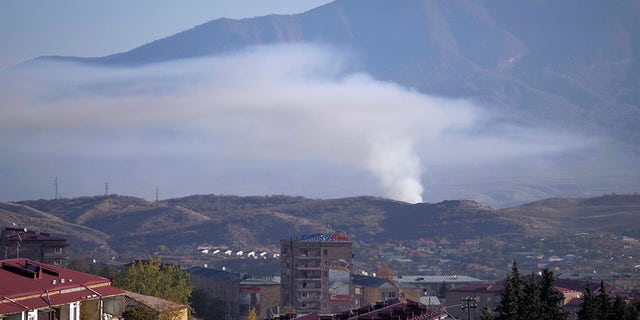 The foreign ministers from Armenia, Azerbaijani and Russia committed to a humanitarian ceasefire during an initial meeting in Moscow on Oct. 10, but the agreement did not hold. They again reaffirmed their commitment to implement and abide by a ceasefire in a statement issued from Paris on Oct. 17, and violations were again reported by both sides.

In its own statement, OSCE Minsk Group, which was created in 1992 by the Conference on Security and Cooperation in Europe to negotiate a resolution over Nagorno-Karabakh, said its co-chairs, Igor Popov of the Russian Federation, Stephane Visconti of France and Andrew Schofer of the U.S., agreed with the foreign ministers of Armenia and Azerbaijan to meet again in Geneva on Oct. 29 to further discuss the parameters of monitoring the ceasefire and a timeline for a comprehensive, long-term solution.

No other information about the terms of the ceasefire was immediately available.

Fighting over Nagorno-Karabakh broke out on Sept. 27 and has grown into the biggest escalation in years over the region that lies within Azerbaijan but has been under the control of ethnic Armenian forces backed by Armenia since the end of a separatist war in 1994.

According to Nagorno-Karabakh officials, 974 of their troops have been killed in the clashes so far, as well as 37 civilians. Azerbaijani authorities haven't disclosed their military losses but said that 65 civilians were killed and about 300 were wounded on their side.

Earlier Sunday, Trump vowed at a re-election campaign event in Londonderry, N.H. to get the conflict straightened out.

“Look at Armenia, they are incredible people, they’re fighting like hell,” Trump said. “Yesterday in Ohio we had a tremendous group of Armenians with the flags and the spirit. And the problems that they have, the deaths, the fighting and everything else, we’ll get that straightened out. I call that an easy one.”

Putin said last week that Moscow’s information showed the death toll neared 5,000, which is significantly higher than what both sides report. On Friday, Pompeo also hosted the Armenian and Azerbaijan foreign ministers for separate talks.

Azerbaijani President Ilham Aliyev has said that Armenian forces must withdraw from Nagorno-Karabakh to end the conflict and that Azerbaijan has the right to reclaim its territory by force after nearly three decades of international mediation yielded no progress.

The four weeks of fighting has prompted concerns of a wider conflict involving Turkey, which has thrown its weight behind Azerbaijan, and Russia, which has a security pact with Armenia. Armenian officials accuse Turkey of being directly involved in the conflict and sending Syrian mercenaries to fight on Azerbaijan's side, claims both Turkey and Azerbaijan deny.

The clashes have also worried Iran, which has borders with both Armenia and Azerbaijan. Iran has occasionally complained about stray mortar rounds and rockets that injured people and damaged buildings in rural areas near the borders. Iran's Revolutionary Guard said Sunday it deployed units of its ground forces to the border near the area of the conflict, the country's state radio reported.