President Donald Trump has followed through on his threat, or promise, to release video of his 60 Minutes interview before it is set to air on Sunday night.

Trump was interviewed by CBS News journalist Leslie Stahl at the White House on Tuesday, but abruptly ended the interview after 45 minutes, declining to participate in a scheduled walk-and-talk that would have included Vice-President Mike Pence as well.

Later that day, he said on Twitter said that he was "considering" posting the White House's copy of the video interview, "so that everybody can get a glimpse of what a FAKE and BIASED interview is all about".

Then, on Thursday morning (Friday AEDT), after he again teased a release of the video ("the vicious attempted 'takeout" interview of me"), a 37-minute-clip of the interview appeared on the President's Facebook page.

CBS, for its part, posted a 90-second-long preview of the Trump interview on social media on Thursday morning, with "More Sunday on @CBS." The show will also include an interview with Joe Biden.

The network decried the President's decision to post the interview.

"The White House's unprecedented decision to disregard their agreement with CBS News and release their footage will not deter 60 Minutes from providing its full, fair and contextual reporting which presidents have participated in for decades," the network said.

"60 Minutes, the most-watched news program on television, is widely respected for bringing its hallmark fairness, deep reporting and informative context to viewers each week. Few journalists have the presidential interview experience Lesley Stahl has delivered over her decades as one of the premier correspondents in America and we look forward to audiences seeing her third interview with President Trump and subsequent interview with Vice-President Pence this weekend." 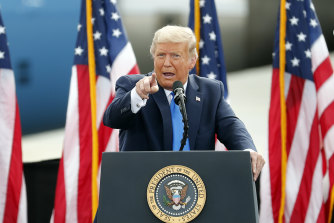 In the clip posted by CBS, Stahl challenges Trump when he says that his administration "created the greatest economy in the history of our country".

Stahl retorts: "You know that's not true. No."

In the clip posted by Trump, Stahl begins the interview by asking the President: "Are you ready for some tough questions?" Trump replies, "Just be fair. .. I'm looking for fairness." Stahl says that Trump "is going to get fairness".

When asked about his comments urging suburban women to vote for him, Trump called it a "misleading question".

When Stahl was sceptical about Trump's claims about his administration's accomplishments, he responds: "You're really quite impossible to convince."

One particularly prickly exchange began when Stahl first asked Trump about calling Anthony Fauci, the director of the National Institute of Allergy and Infectious Diseases, and other health officials “idiots” before asking whether he thinks masks work.

Stahl made clear at the beginning of the interview that she did not plan to fact-check the President's words. "I'm not going to do that," she said.

But when Trump said that his campaign was "spied on," Stahl replied: "There's no real evidence of that. … This is 60 Minutes. And we can't put on things we can't verify."

Still, Stahl got Trump to admit that new coronavirus cases are up around the country, although he argued that "cases are up because we're doing so much testing".

Stahl tried to press Trump about mask-wearing at his rallies.

"A lot of people are wearing masks," Trump said.

"And a lot of people aren't," she added. "I am watching all these people jammed together, and I'm seeing most of them without masks and I'm wondering about the message you're sending with these pictures."

Trump accused Stahl of "protecting" Biden by giving him soft coverage, saying that she wouldn't interview the former vice-president as combatively.

Stahl said that Trump is trying to "discredit" the media. "You discredit yourself," he replied. "I don't have to discredit you."

Trump said that a lot of Stahl's questions were about topics that were "inappropriately brought up".

"You're President," she replied. "Don't you think you should be accountable to the American people?"

At the end of the video clip, Trump spends several minutes complaining to Stahl about her questions and then tells her: "That's no way to talk."

A man's voice can then be heard cutting in. "Leslie, one second, we're – this is the first warning," the man says. "I think we have five minutes until we have the Vice-President step in. Is that about right?"

The President suggests that he and the man "go meet for two seconds," then turns to Stahl and abruptly gets up to leave, telling her: "I'll see you later. Thanks."

Our weekly newsletter delivers expert analysis of the race to the White House from our US correspondent Matthew Knott. Sign up for The Sydney Morning Herald‘s newsletter here, The Age‘s here, Brisbane Times‘ here and WAtoday‘s here.