THIS is the moment a three-year-old girl is pulled alive from the wreckage of a collapsed building in Turkey.

Hero rescuers in Izmir pulled little Elif Perincek from the wreckage of the Doğanlar apartment block after she spent 65 HOURS buried in the rubble. 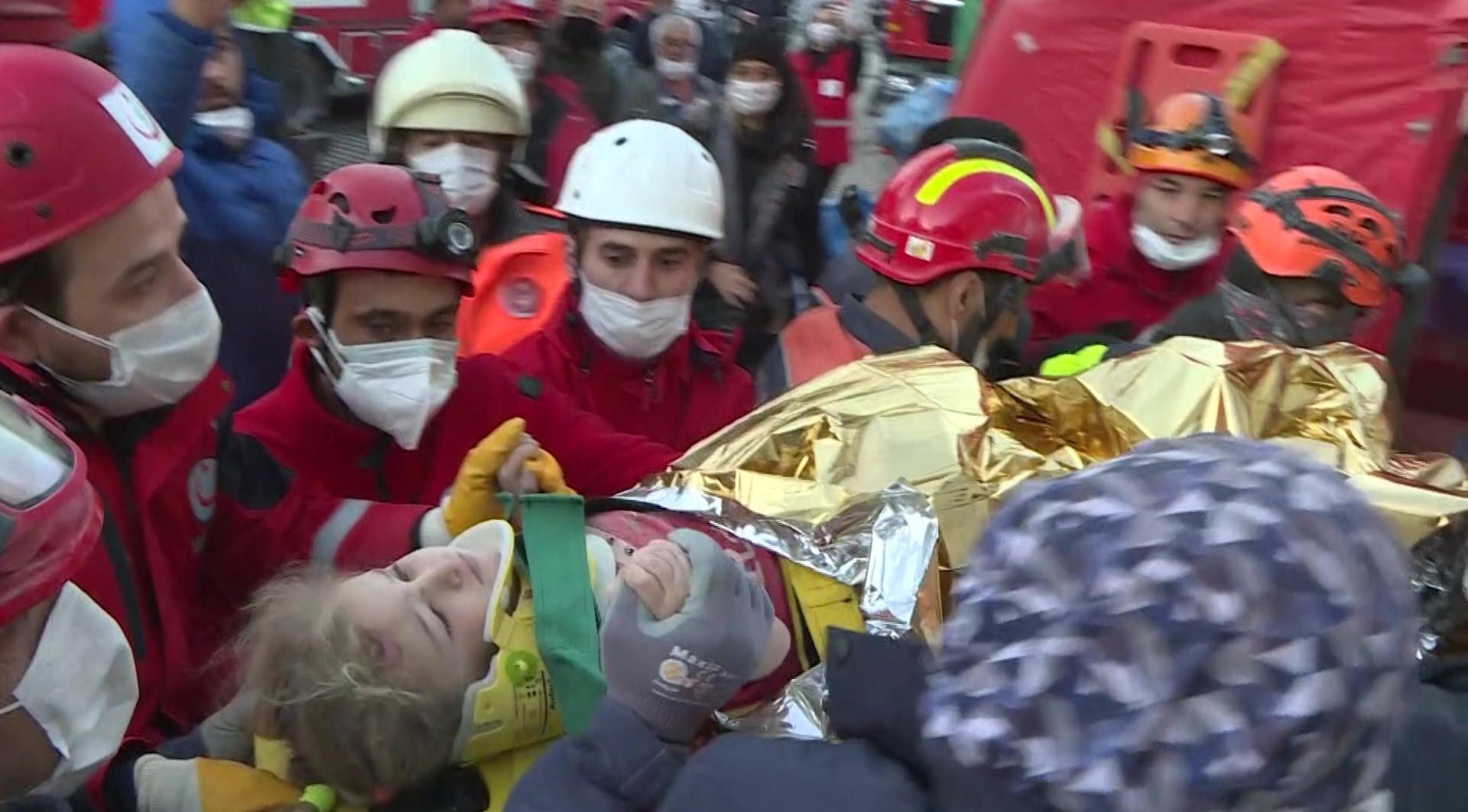 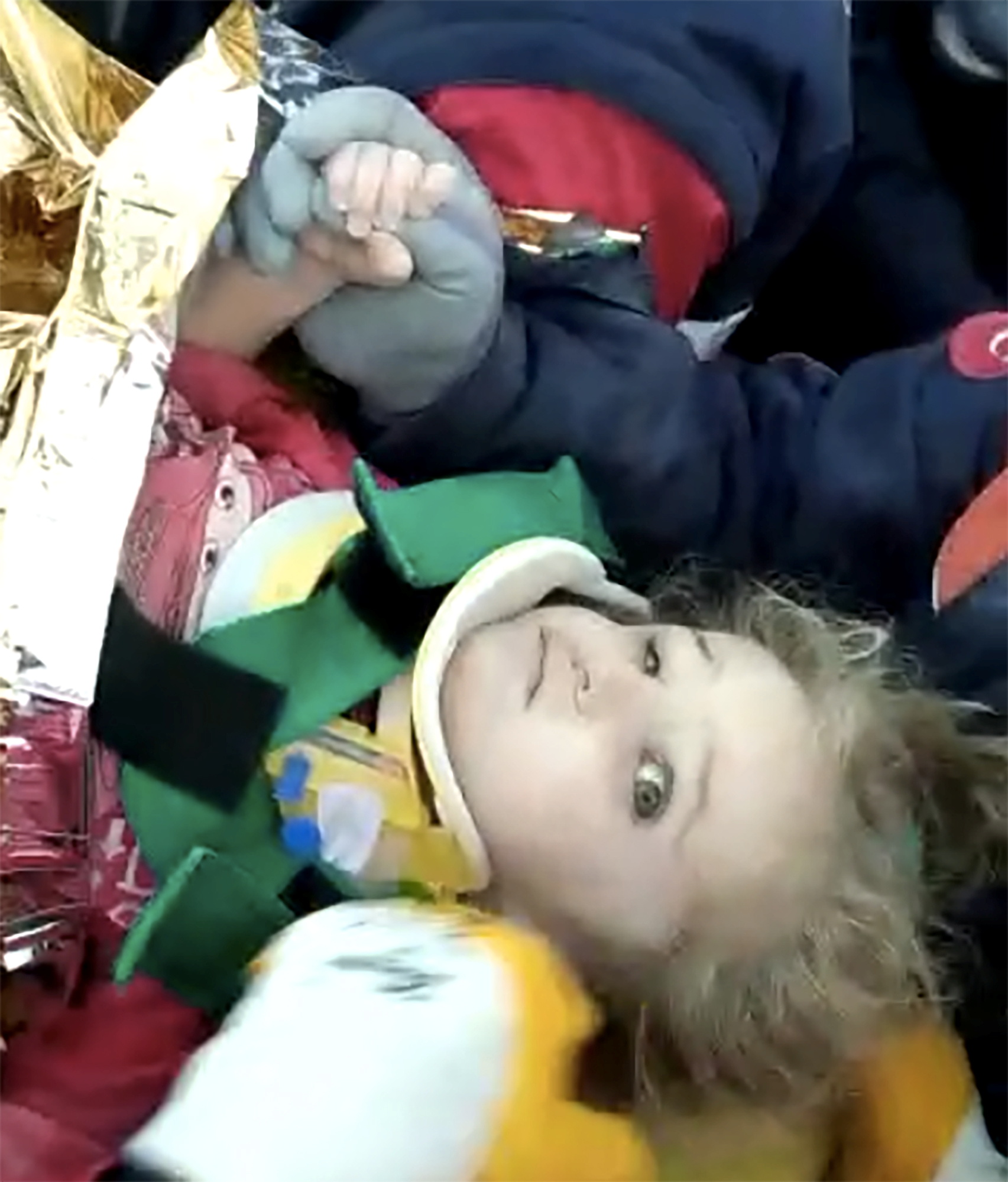 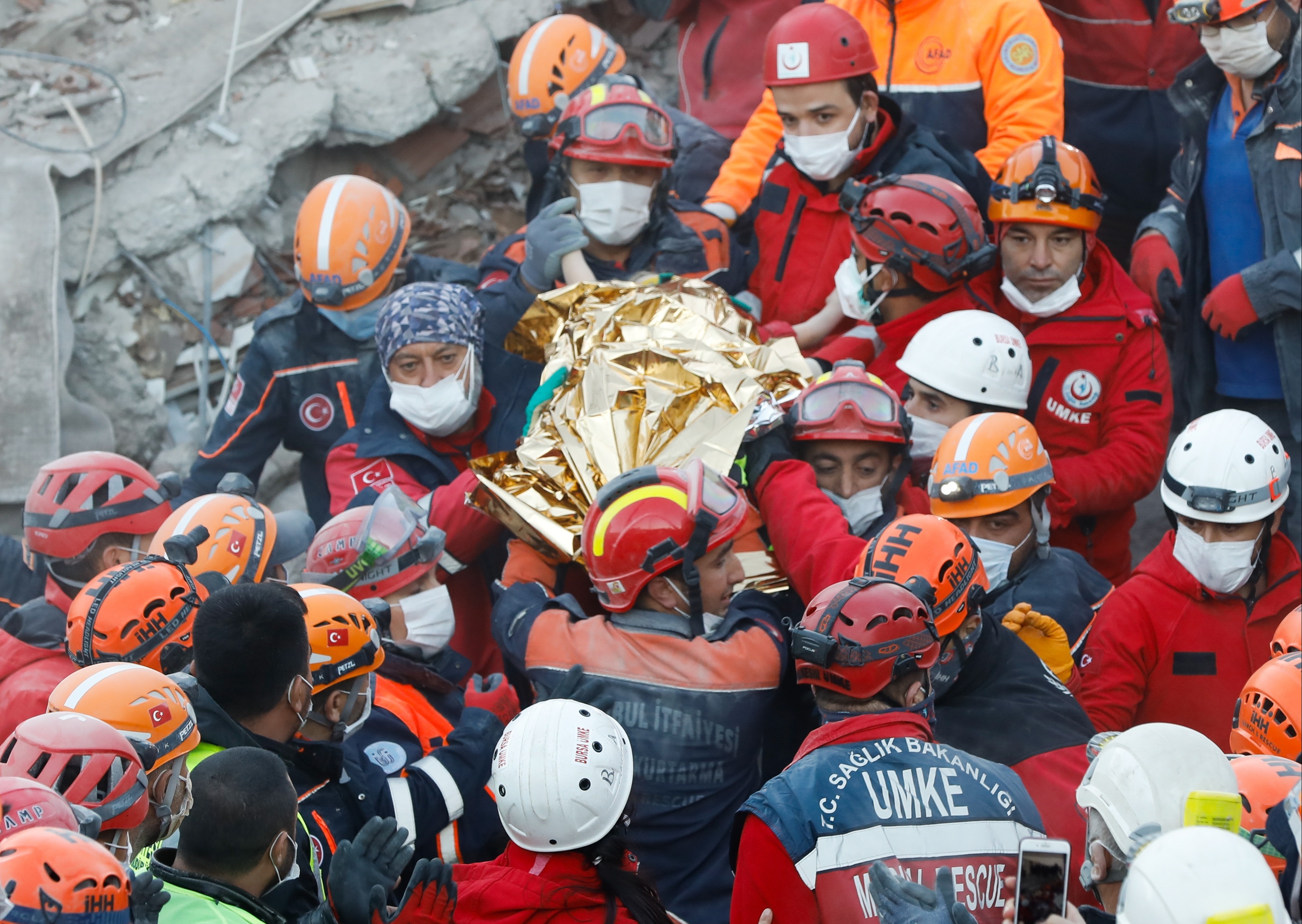 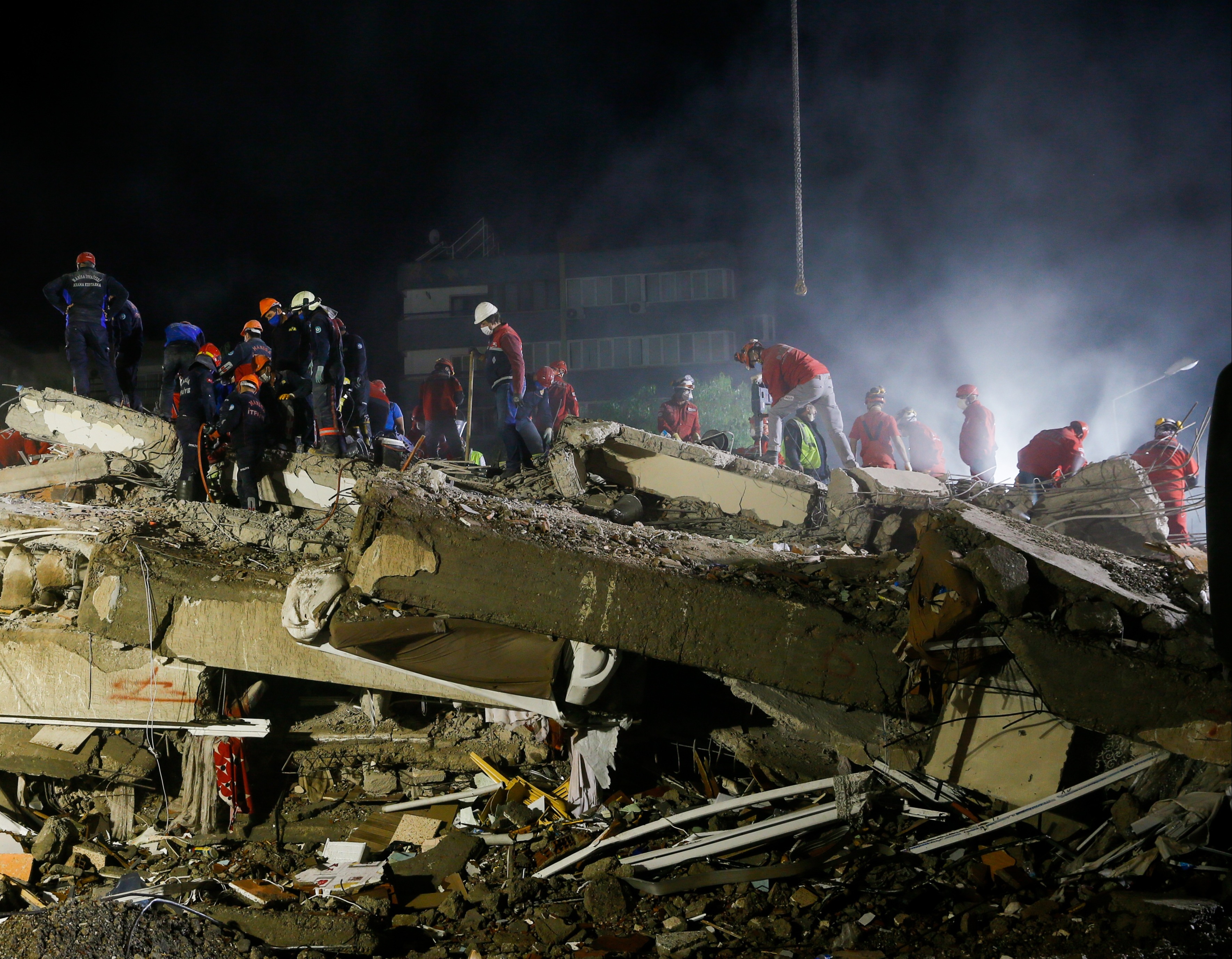 Izmir bore the brunt of destruction from the 7.0 magnitude quake that tore through Turkey and Greece, collapsing at least 20 buildings and sparking a mini-tsunami that swept piles of cars and debris inland, adding to the chaos.

Incredible footage shows the moment Elif is rescued after spending almost three days trapped inside the hellish mess of bricks, dust and bodies.

The crowd bursts into rapturous applause as the little girl is found alive, as tearful rescuers shout in delight and Elif is pulled from the rubble on a stretcher.

She tighly clasps one of the rescuers thumbs in her tiny fist as she is then taken carried into an ambulance and taken away for treatement.

According to NTV, little Elif was "wounded", but it is not clear whether her injuries are serious.

Tragically her seven-year-old brother, Umut, did not make it, with rescuers pulling his body from the debris after finding the rest of his family alive. 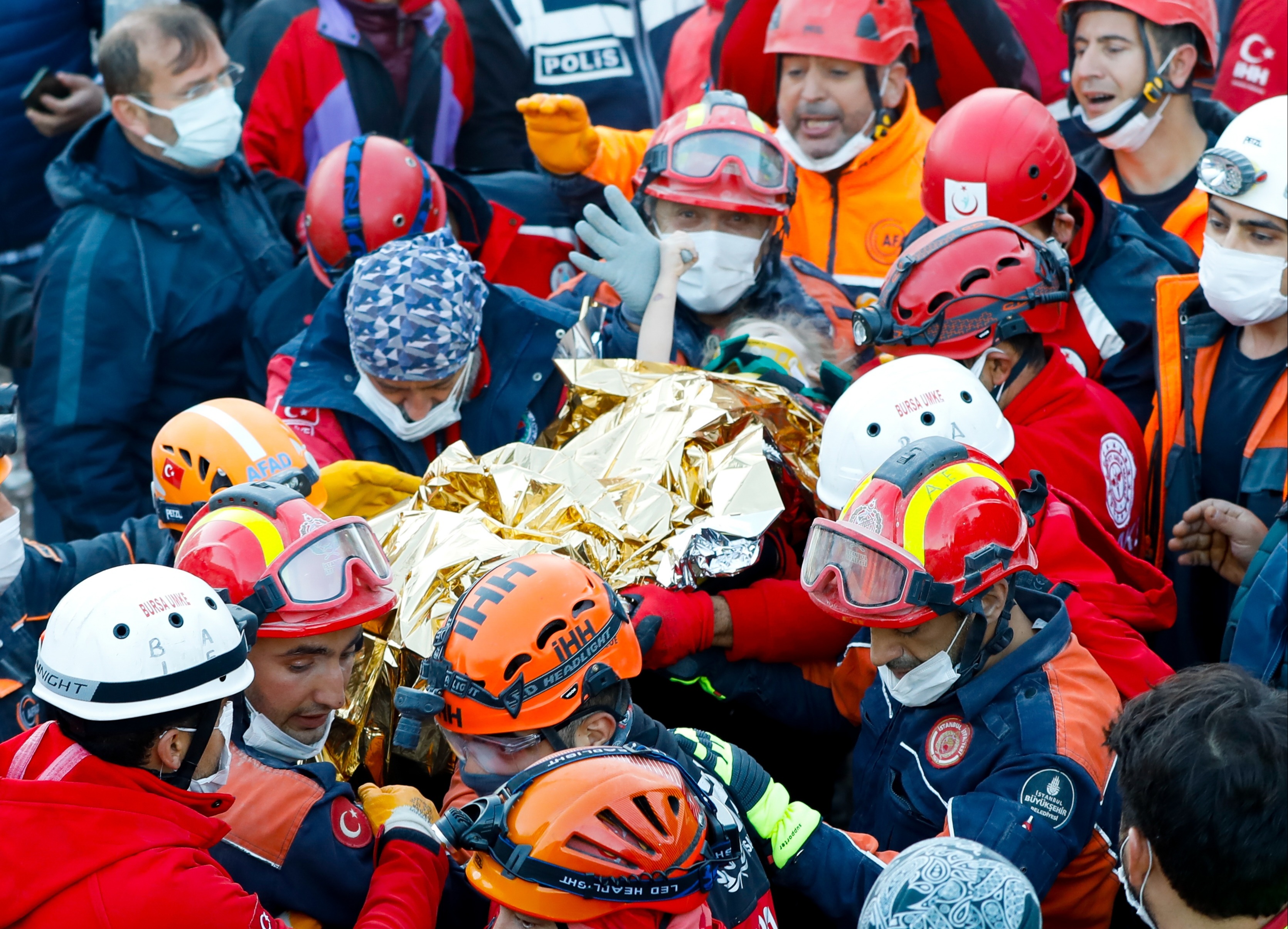 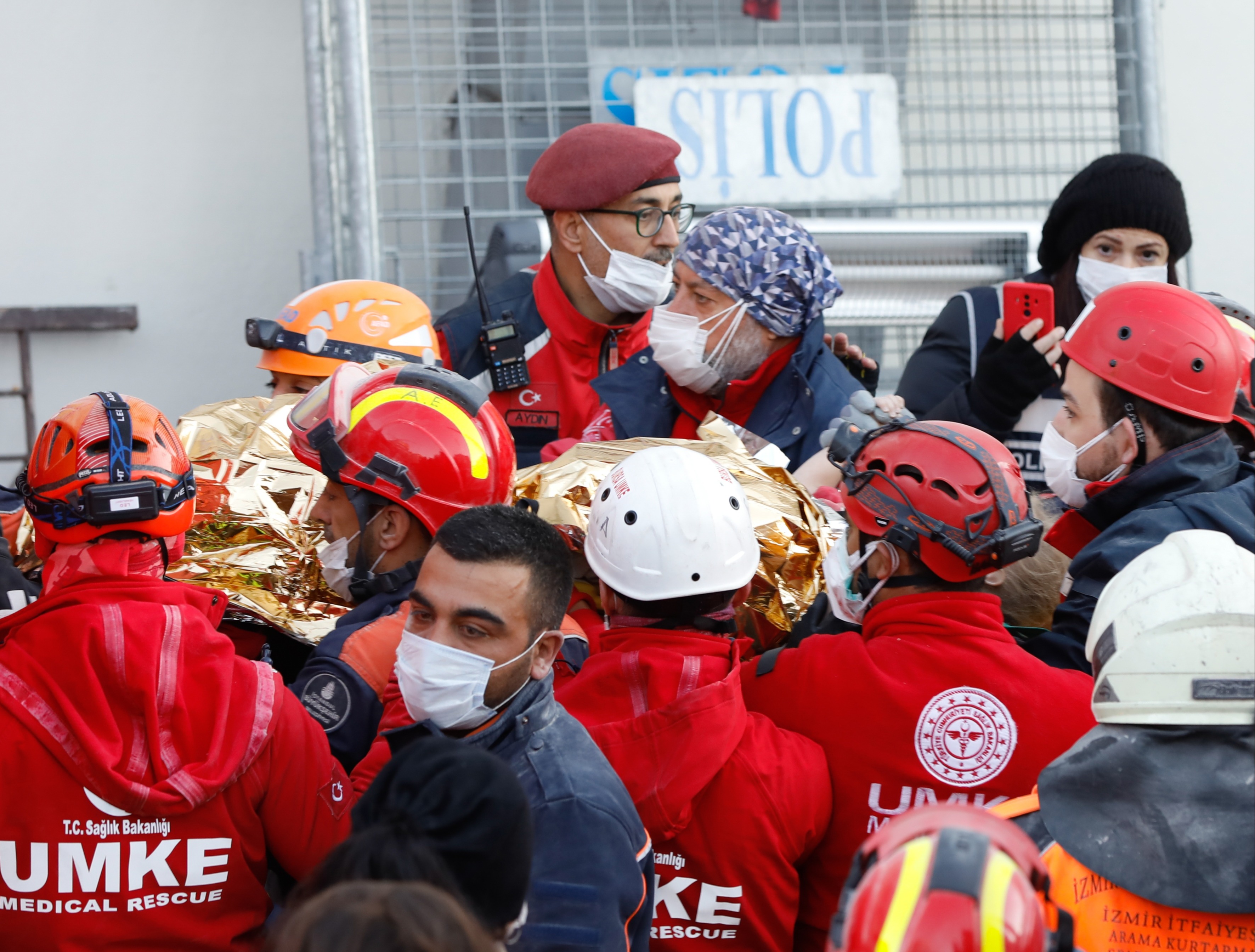 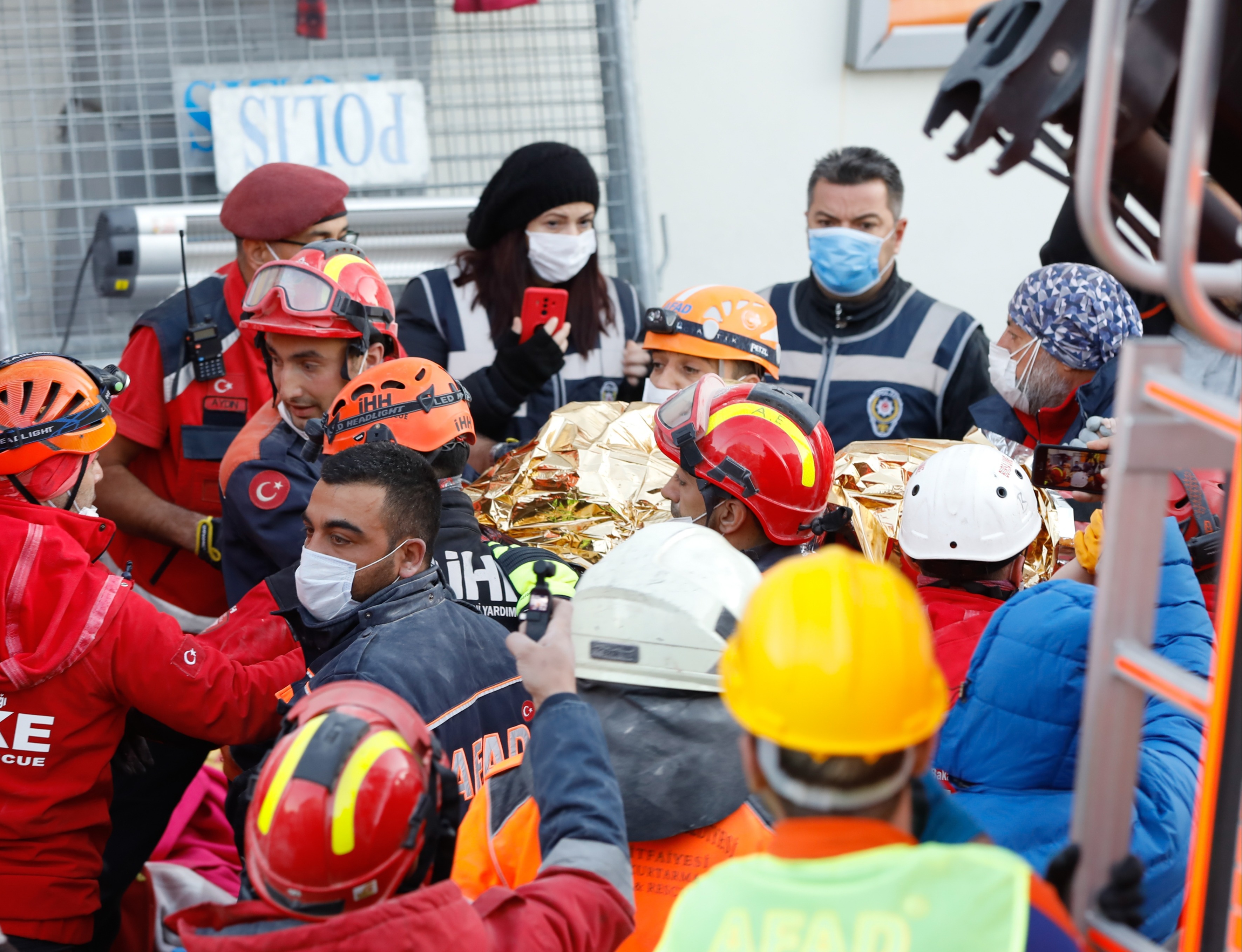 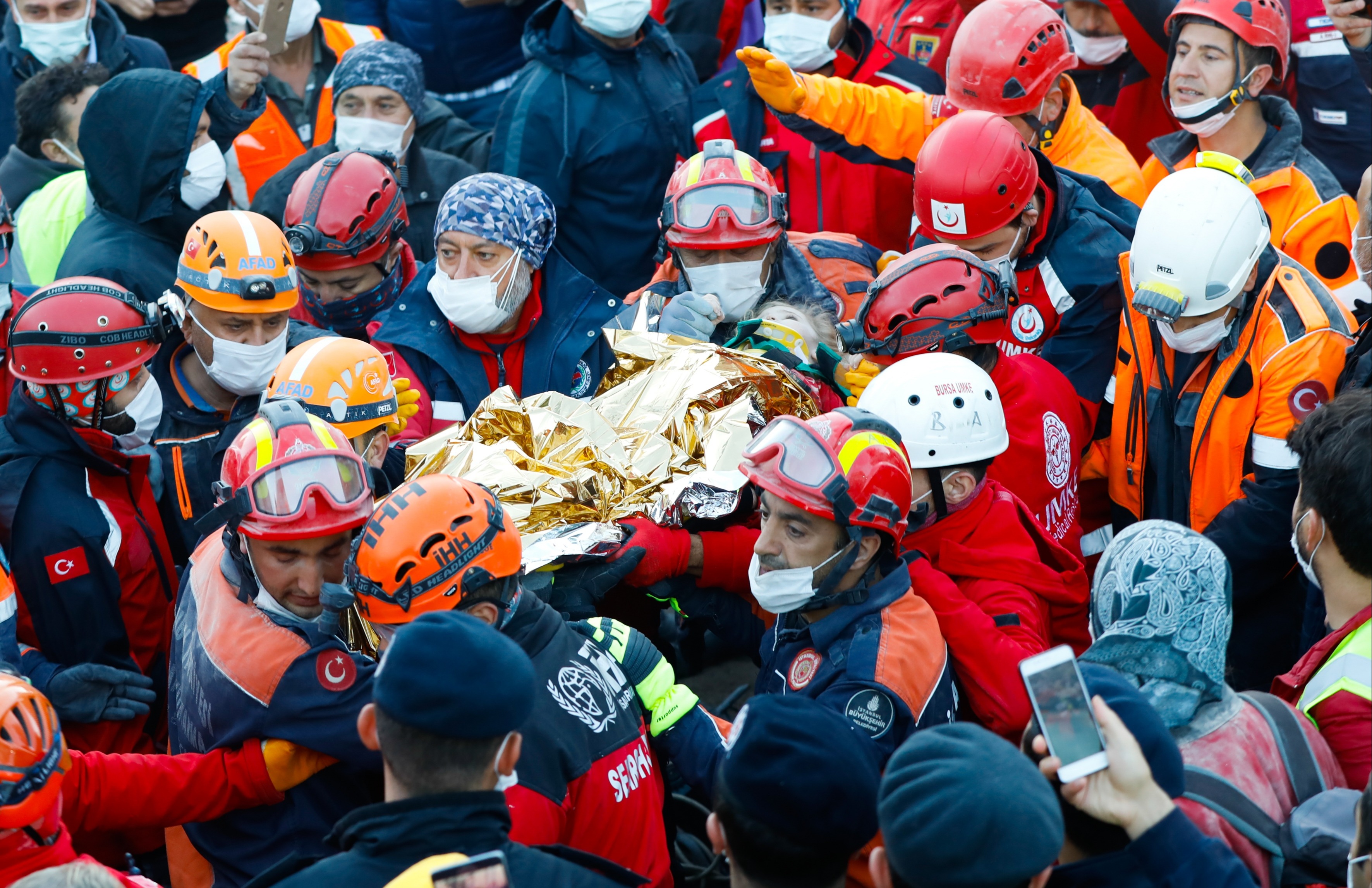 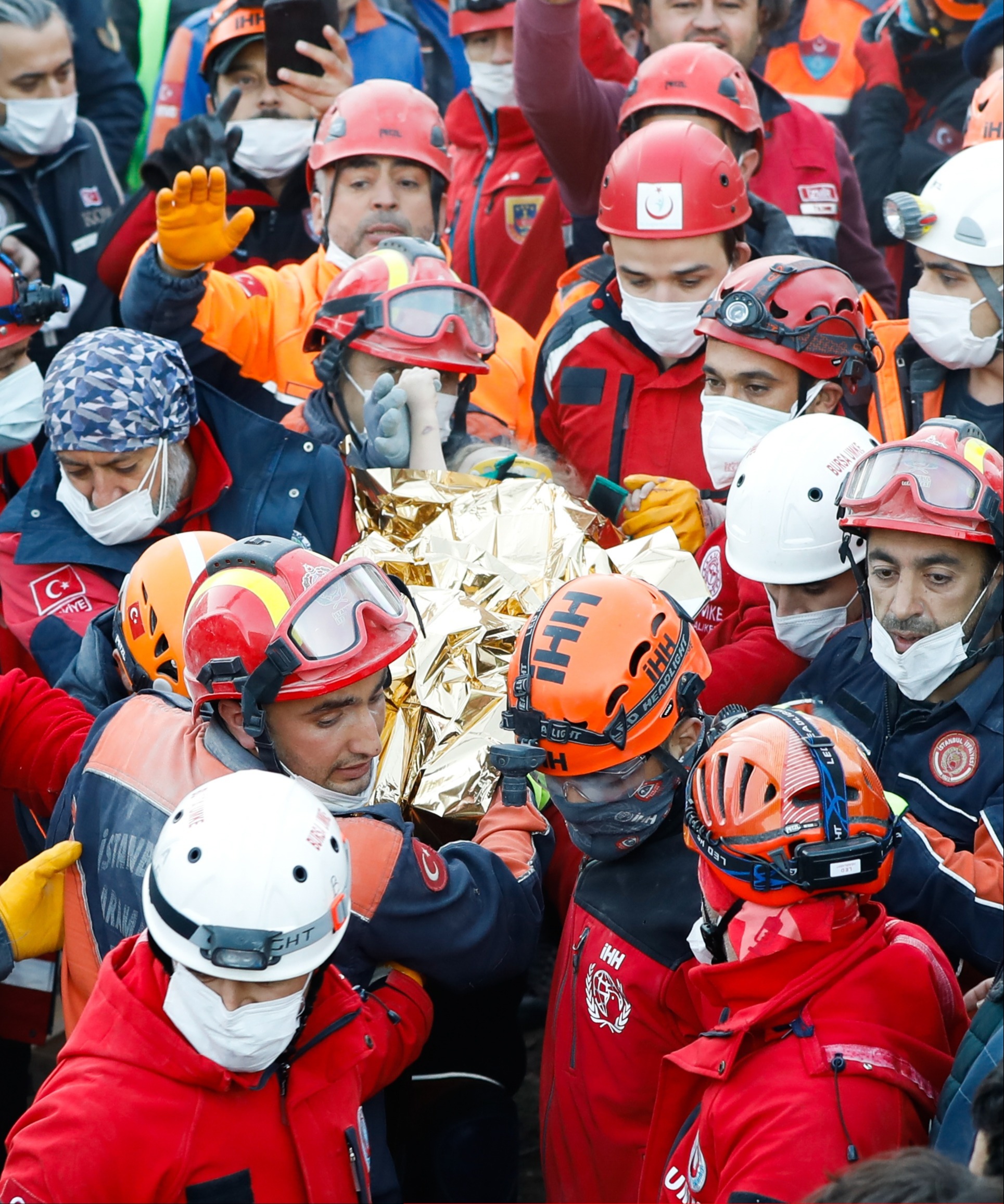 Shortly before the family was found, rescuers also pulled a 14-year-old girl to safety after she spent 58 hours trapped beneath the flattened apartment building.

Earlier search and rescue teams pulled Ahmet Citim, 70, out alive after he also had been buried under rubble for 34 hours.

Video shows the moment he was taken out of the ruins of a building in Izmir in the middle of the night after the strong quake struck the Aegean.

Rescuers cheered and clapped as Mr Citim was taken on a stretcher to receive hospital treatment, as searches continued in nine buildings in Izmir, Turkey’s third biggest city.

He was later pictured in hospital with Health Minister Fahrettin Koca, who tweeted that Citim told him: “I never lost hope.”

Also rescued was 16-old Inci Okan, who was trapped under the rubble of the same eight-storey building as Mr Citim before being rescued after 17 hours, along with her dog Fistik – Pistachio.

National Medical Rescue Team member Edanur Dogan had held the girl's hand while rescue teams removed the debris above her and later visited her in hospital. 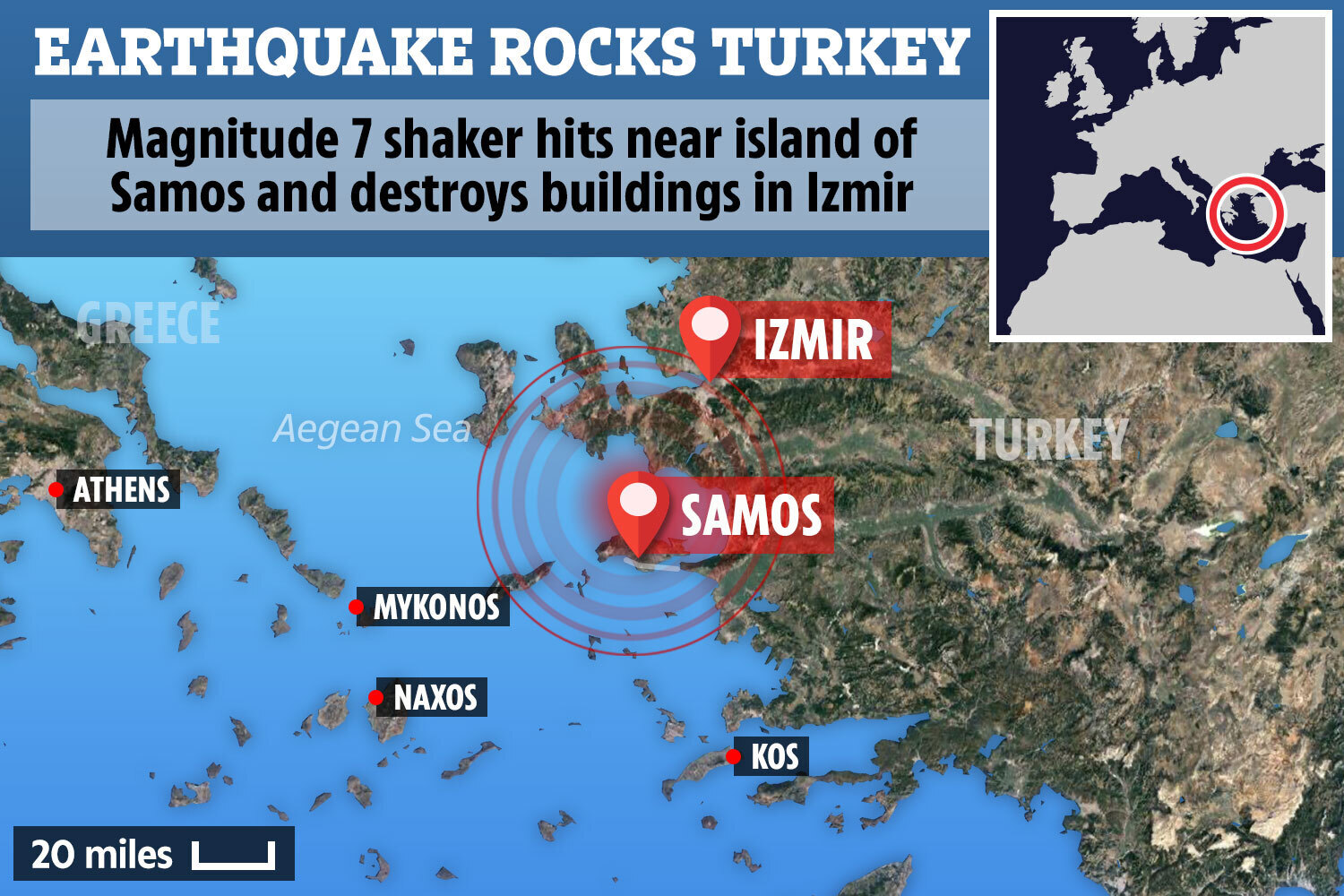 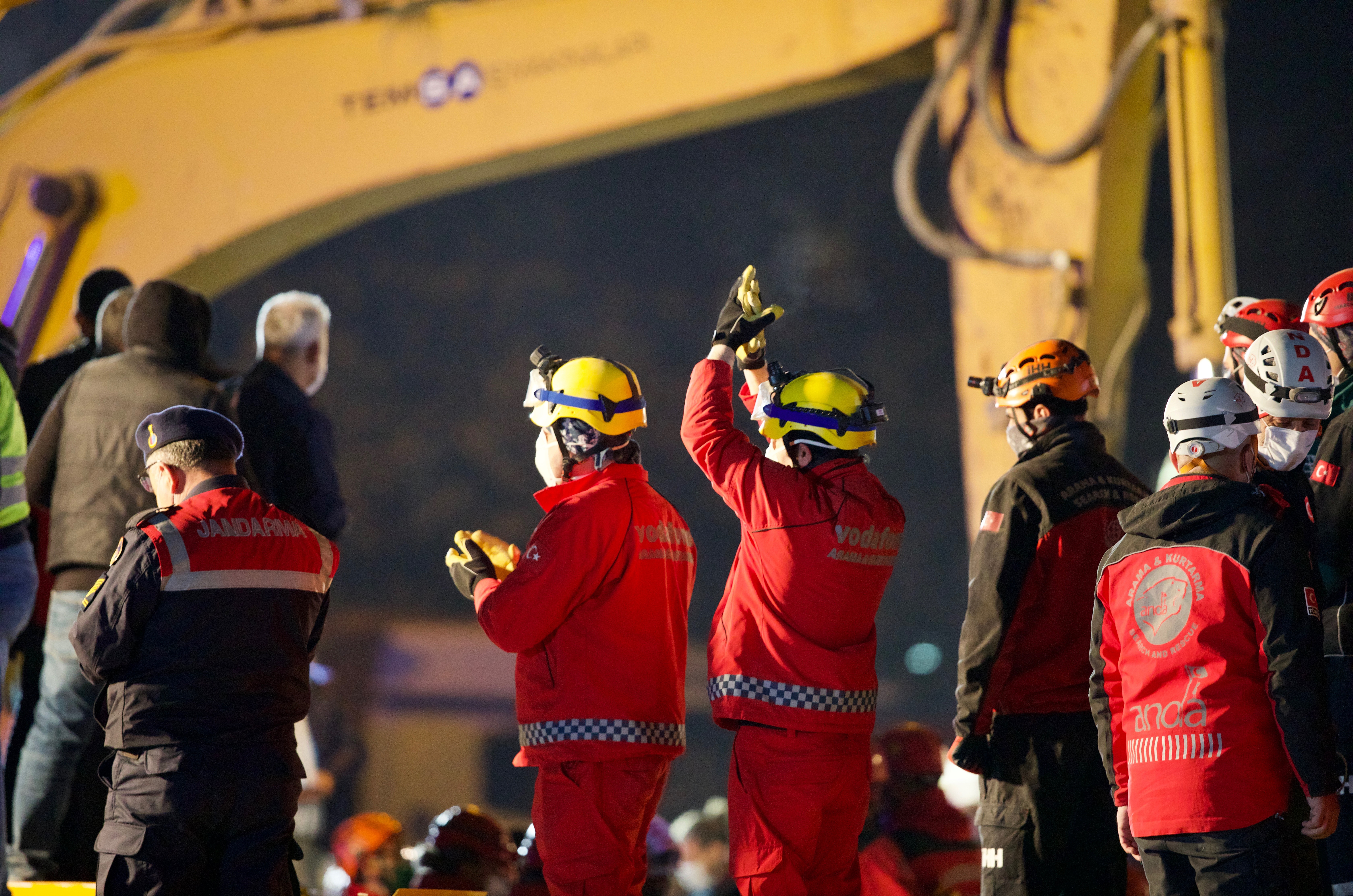 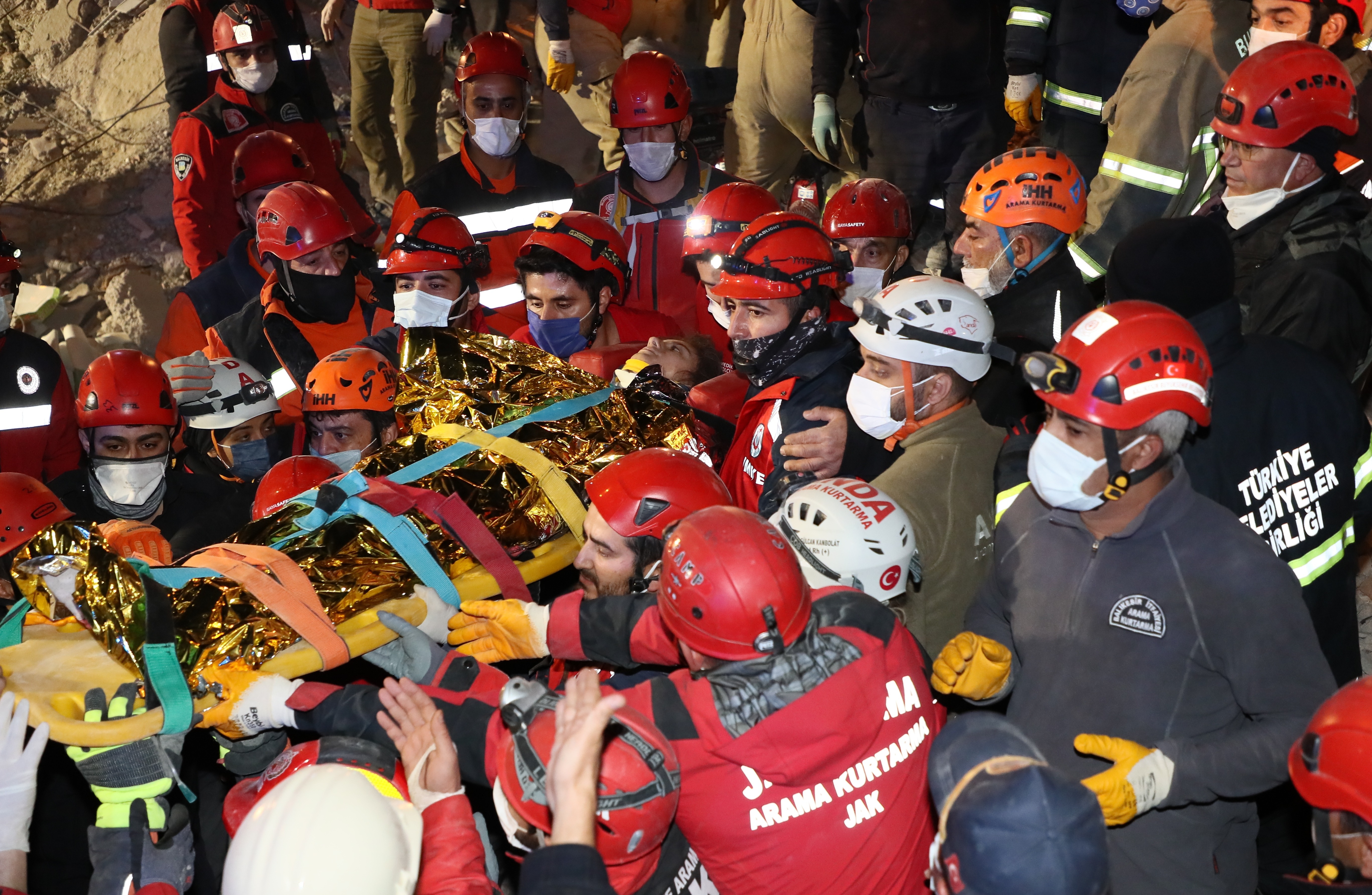 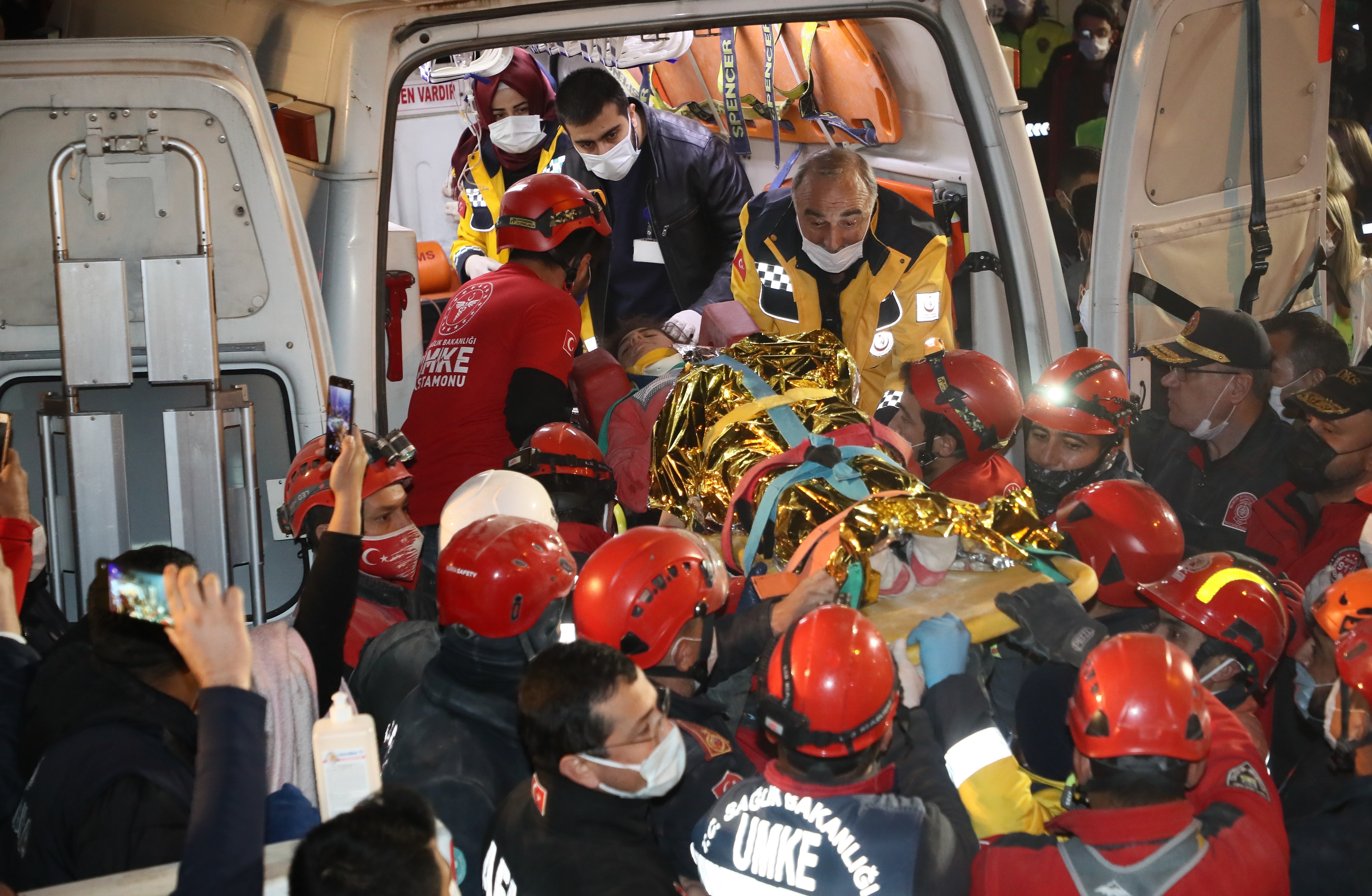 People in the city endured nightmarish scenes after the earthquake sparked a mini-tsunami that raged through streets carrying away cars, further wrecking homes and spreading debris across the streets.

The earthquake which was centred on the Greek island of Samos has so far killed at least 64 people and injured more than 900.

Rescuers are now picking tirelessly through collapsed buildings in a desperate bid to find more survivors. 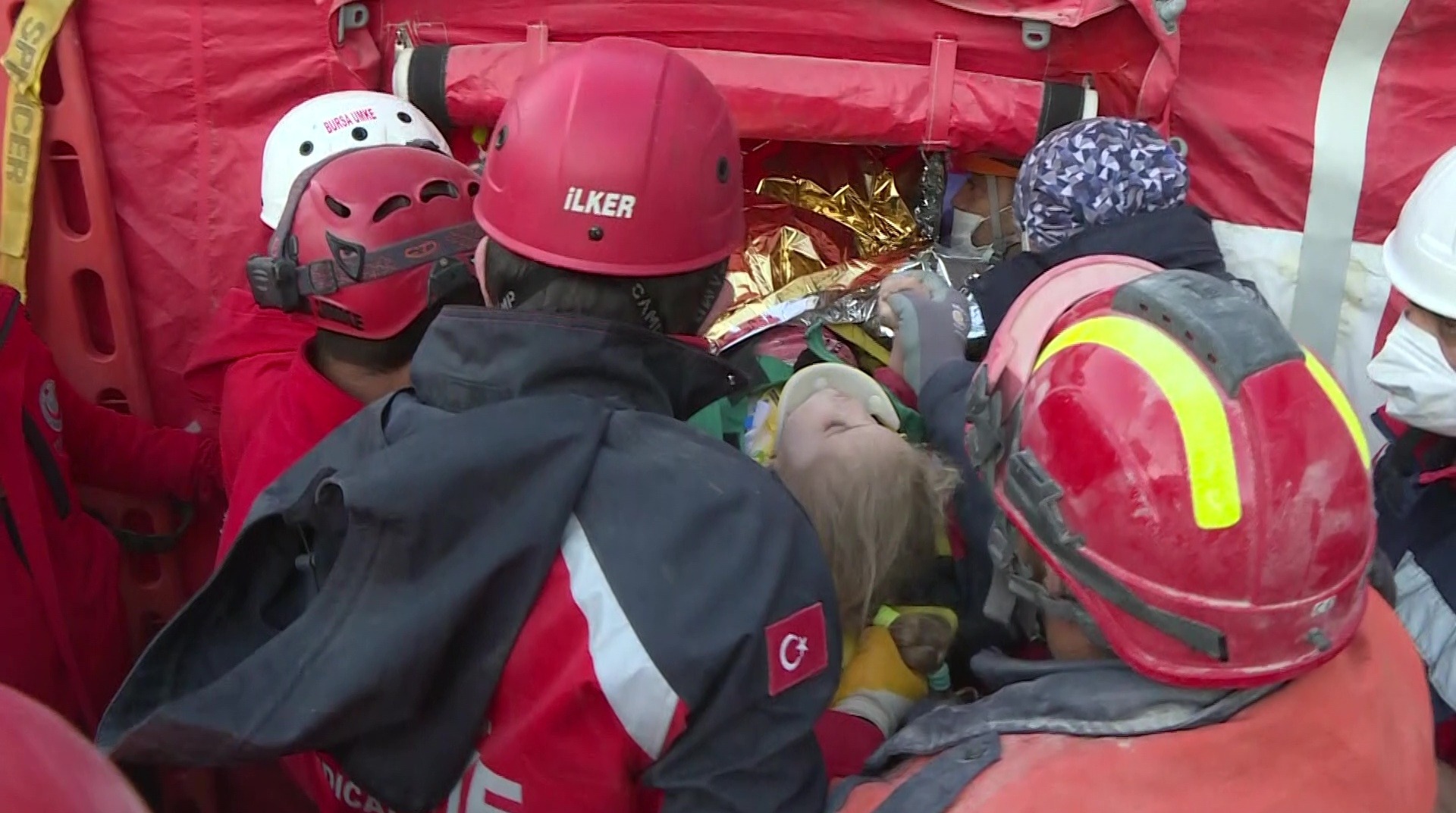 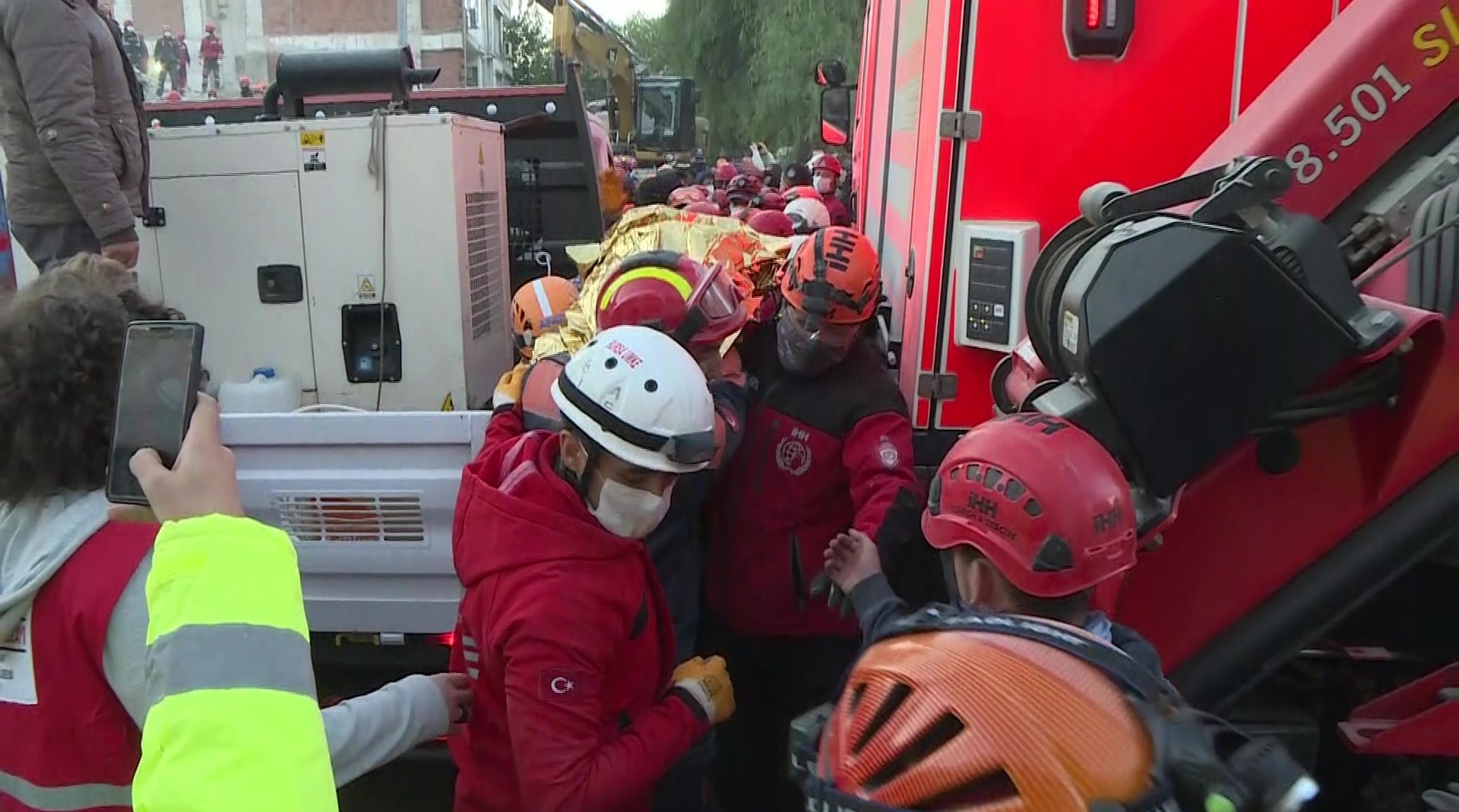 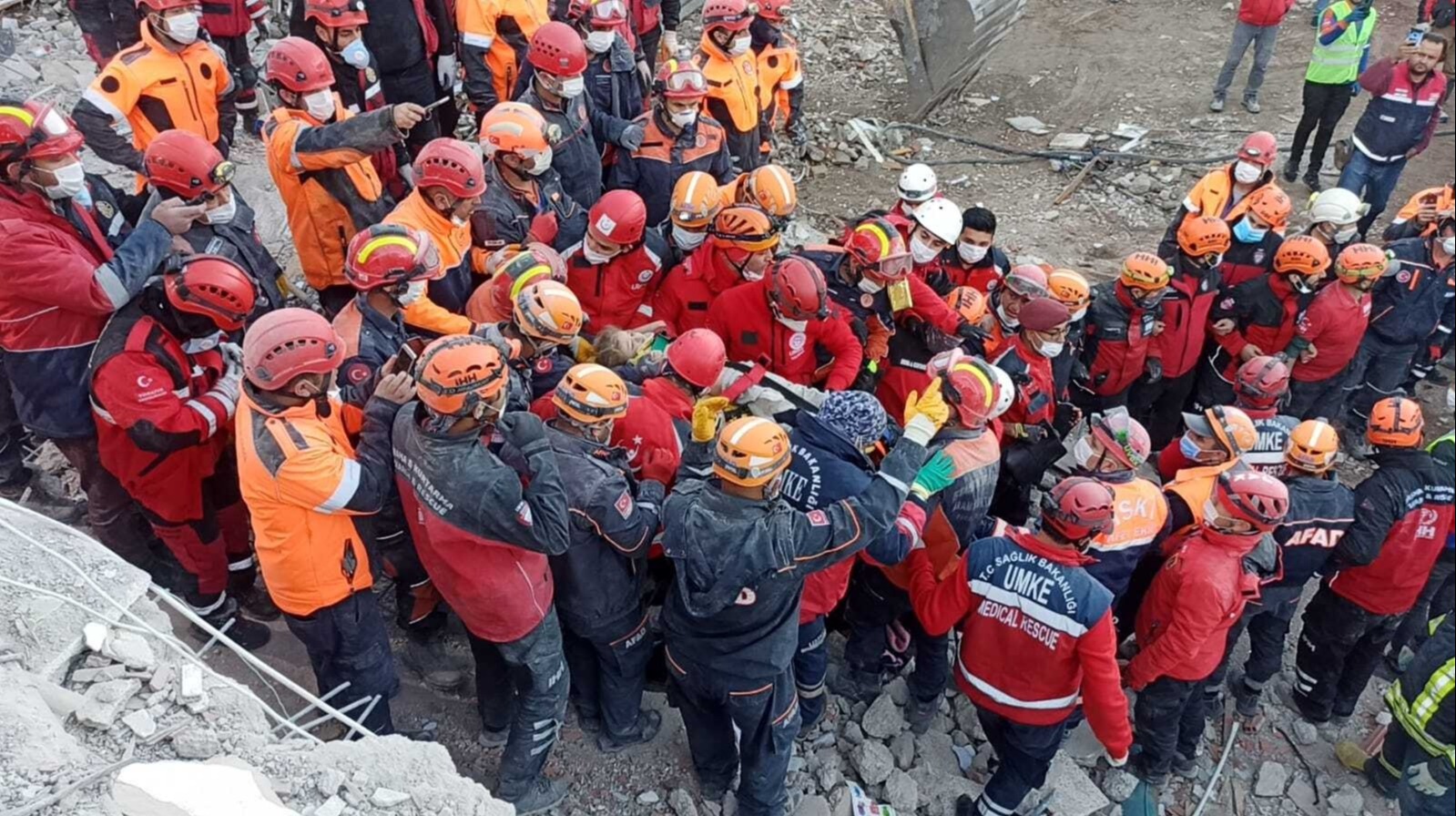