Twins' attempt at the Fruit Snack Challenge ends in tears

All mine! Twins’ attempt at the Fruit Snack Challenge ends in tears – but only for one of them

A Delaware County family’s attempt at the Fruit Snack Challenge did not go as planned when one twin stole all the candies when her mom was not looking.

The Larkin family from Garnet Valley, Pennsylvania, attempted the social media challenge where parents put a snack in front of their children and leave the room.

They are only allowed to eat the snack when their parent returns and tells them they can now have some.

But when the candies were placed in front of twins Hailey and Hayden, two, cheeky Hayden grabbed all the snacks causing her sister to burst into tears. 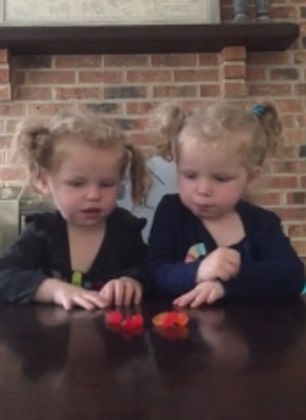 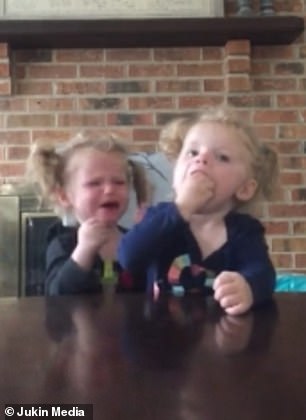 Hailey (left) and Hayden (right), two, from Delaware County, Pennsylvania, attempted the Fruit Snack Challenge but rather than waiting for their mom Lisa, an ICU nurse, to return before eating the snack, Hayden decided to eat all the candies, sending her sister into tears 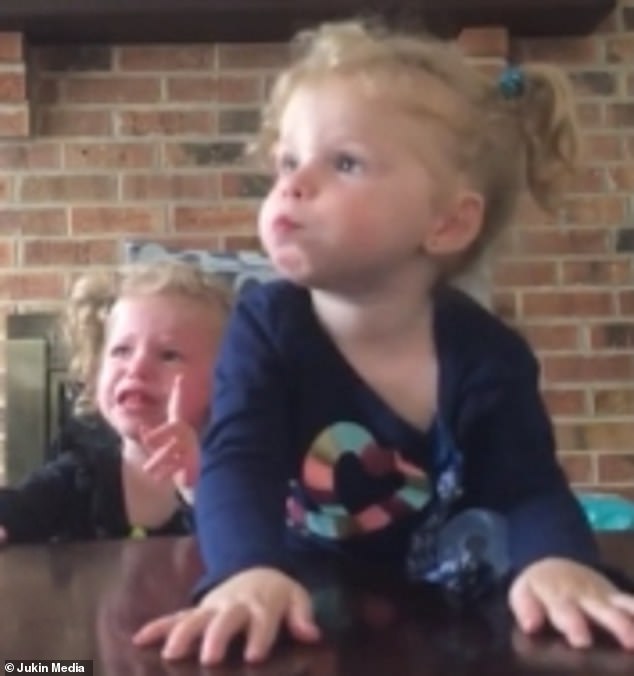 Hailey starts to cry as Hayden crawls towards the camera and Lisa comes back in asking ‘did you eat all those Fruit Snacks?’ as Hailey holds up one finger

Mom Lisa Larkin puts the Fruit Snacks down in front of the girls saying ‘no touch, wait till mommy comes back, you understand?’.

Immediately Hayden reaches out for the candies before Lisa stops her and she looks up bashfully.

But when Lisa leaves the room, both girls grab one candy each before Hayden tells her sister ‘no’ and scoffs all the remaining snacks.

Hailey starts to cry as Hayden crawls towards the camera and Lisa comes back in asking ‘did you eat all those Fruit Snacks?’ as Hailey holds up one finger. 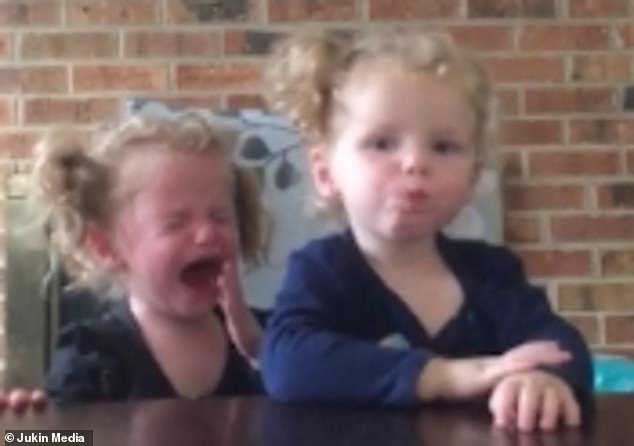 Mom Lisa, an ICU nurse who also has two sons under the age of six, said she gave Hailey her own bag of Fruit Snacks after taking the video earlier this month.

She said: ‘Hayden is definitely the go-getter. She is the youngest out of all four and the smallest, so it is kind of survival of the fittest around here, and I think she realized that pretty early on. ‘

Lisa and husband Rick told 6abc.com they thought everyone needs a bit of humor at the moment as the country continues to struggle with the coronavirus pandemic.

She said: ‘We are all in the same ship but it is definitely not the same storm for everybody, so I can understand how people are very stressed but if you can take a deep breath and see the humor in life.’

The Fruit Snack Challenge is a version of a famous experiment called the Stanford marshmallow experiment by Walter Mischel, a professor at Stanford University.

It was a 1970 study on delayed gratification where a child was offered a reward of either a marshmallow or a pretzel stick.

The had a choice between receiving one immediate reward or two rewards if they waited.

Researchers found in follow-up studies that children who could wait longer for their preferred rewards tended to have better life outcomes.

The study was later replicated in 1972 with a more diverse sample population.

The original study was 32 children – 16 boys and 16 girls – but the replicate was more than 10 times larger than the original.

It showed only half the effect of the original study and that economic background provided an explanation for the other half, rather than willpower.