Two mates were rescued after inflatable mattress floated out to sea

Two friends who were stranded at sea for hours on an inflatable mattress full of holes admit they only began to panic when their supply of beer ran out.

Jackson Perry and Noah Palmer took the mattress onto the water off the Mandurah coast, in Western Australia, on Saturday.

‘We had this mattress out the front of Noah’s house, it was a bit deflated, so we decided to pump it up, go down and have a drift on the water, probably only 50m,’ Mr Perry said.

The pair had planned to enjoy a few beers out on the water, though quickly hit trouble when strong winds pushed their floating device out to sea, 7 News reported. 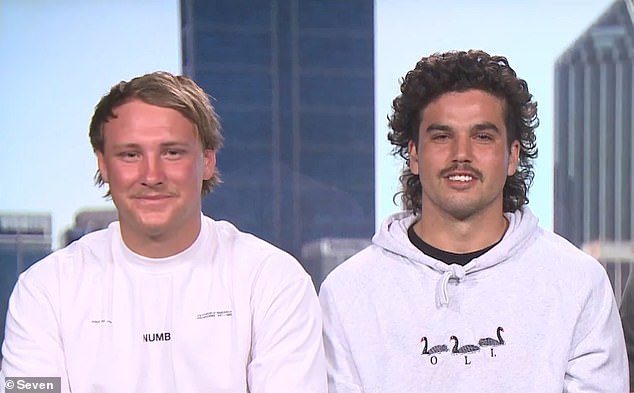 Jackson Perry (right) and Noah Palmer (left) took the mattress onto the water off the Mandurah coast, in Western Australia, on Saturday (pictured, the pair appeared on Sunrise following their rescue)

A cool-headed Mr Palmer said the pair remained calm until their beer supply ran out.

‘As long as we had enough beers to keep us going we were all right … as soon as the beers got a bit low we tried to head back in,’ he said.

The mattress was also riddled with holes which meant air was constantly escaping from it.

Mr Palmer had to jump into the water every 10 minutes to blow air back into the mattress to stop it from deflating.

The pair managed to call for help before the battery ran out on their phone.

Mandurah Volunteer Rescuers Tex Seek and Reuben said they couldn’t believe their eyes when they found the boys floating on the mattress.

‘Rueben spots this thing out, way out in the ocean on the horizon and he goes ‘I think that’s them Tex’ … I go ‘surely not, there’s no way they’re that far out on a mattress,’ Mr Seek said. 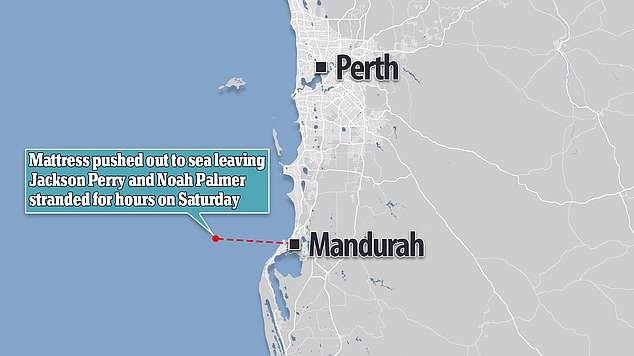