Two men explain how their friendship helped them beat Covid-19

‘Having a friend go through the same thing is what kept me going’: Two coronavirus survivors who met in hospital ward are reunited on GMB and tell how their close bond helped them beat killer infection in ICU

Two men who successfully beat Covid-19 while being treated in adjacent hospital beds have spoken about the ‘unbreakable bond’ they have developed while fighting the killer disease.

Peter Julian, 54, and Joe Vutung were both treated for coronavirus at the Wythenshaw Hospital in Manchester.

Mr Julian had previously spoke about the devastating impact the disease had on his mental health. He admitted he suffered post-traumatic stress disorder and terrible hallucinations while under the influence of the virus. 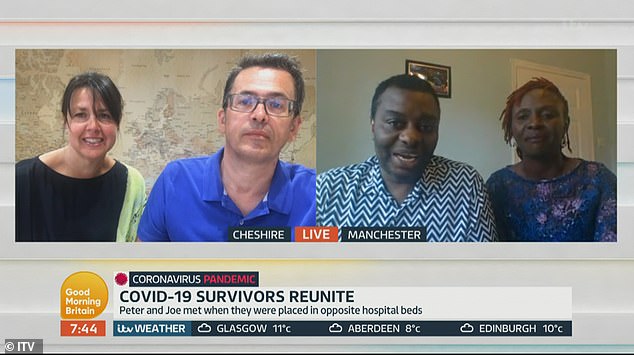 Peter Julian, left, and Joe Vutung, right, formed a strong bond after meeting on a recovery ward in the Wythenshaw hospital in Manchester after they had been brought around from an induced coma while their bodies battled Covid-19 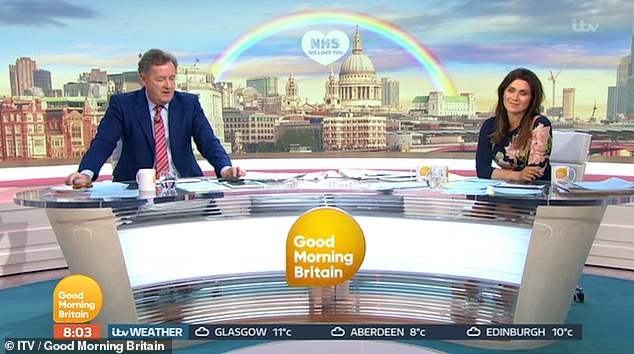 Both men told hosts Piers Morgan, left, and Susanna Reid, right, what their new friendship had helped them believe that they would be able to beat the terrible disease

The pair were reunited  this morning on Good Morning Britain where they spoke Piers Morgan and Susanna Reid.

Mr Vuting spent 14 days in a coma. He said his friend Mr Julian provided him with hope and confidence to build his strength.

Both men were in different intensive care at the same time and met each other on a recovery ward, having both witnessed several different patients dying.

According to Mr Julian, who spent 17 days on hospital and eight on a ventilator, said: ‘Joe emanates a calm wisdom, and I emanate raging lunacy, so having someone balance me out was fantastic.

‘I heard him talk to his family and his brother in LA, and his legion of friends. and that just lifted you. And the best bit was were were very low on postiive stories and seeing his beautiful wife and beautiful children pick him up, on I think it was Friday. We loaded his daughter up with 12 Oreo doughnuts and seeing him leave was one of the most positive and uplifting experiences of my life.’

When asked if he ever thought he was not going to survive, Mr Julian said: ‘Once I was awake and off the ventilator in intensive care I didn’t really think I was going to make it because the evidence around my eyes was that I wouldn’t, so that was clear.

‘Once we go out the other side I thought me and all the people in the room – there was only five of us – were all going to make it and we just had to tick some boxes in terms of health, only to discover people were still not making it.

‘Having Joe there, having another friend going through the same thing, having my family and a legion of people wishing me well is what kept me going, because there were times I wanted to give up.’

Mr Vuting said: ‘My feeling was very horrible, as Pete just said he felt like he couldn’t make it because he was seeing people dying as same as myself. In the intensive ward I was in, because I wasn’t in the same ICU as Pete.

‘So in the ICU I was in it was a bay of about seven beds, and I met six other patients, and when I came out from the coma these patients were all alive. And every morning the next day one has died.

‘Eventually after a few days six patients have died, and I thought I was not going to make it. I was just waiting. The next day they said they were going to take me out to another ward, so I went to this next ward and met Pete.

‘It was just me and Pete their struggling, we managed to help each other.’

Monday, March 23: Had some aches and pains. Given the news, I went onto the NHS Covid-19 checker. Based on the list, I had no symptoms and therefore guessed at worst it was some other seasonal flu.

Tuesday, March 24: I planted out some potatoes and carrots in a plot. Felt absolutely fine.

Wednesday, March 25: Woke up with aches. Given I still had no symptoms, I assumed it was either seasonal flu, me maybe over-doing the digging, or a combination of the two.

Friday, March 27: It was a lovely sunny day. I never sleep in the day, but fell asleep in the garden. So, if nothing else, I later went on to have best tan in the intensive care unit.

Weekend of March 28/29 : Started feeling breathless. Re-checked my symptoms. With exception of breathlessness, I had no others. Stayed in bed again assuming flu.

Monday, March 30 : Increasingly concerned, so I called paramedics. They came and took my vitals. No swab kits – so they said I may have Covid-19 based on some symptoms.

My profile, coupled with the observations, made them conclude I was in the two weeks/in bed/bit of paracetamol category.

They said I had none of the symptoms, re-confirming what I thought I knew and, in any case, I did not meet meet the criteria in terms of risk, age, etc.

Again, re-confirming what I thought I knew.

Wednesday, April 1 : Breathlessness increased. Decided that if it continued into the following morning, I was calling 999 regardless.

Thursday, April 2 : My wife, Carol, called an ambulance as I could not speak due to breathlessness. Had some paracetamol prior to them arriving. My temp was 39.1C versus top range of 37.5.

My blood oxygen was really low. Rushed into intensive care. I was put on a ventilator as my body could not survive unaided. They brought me off at 9am on the 7th, five days later, thinking they had won.

By 9.45pm the same day, they had put me back on as my body was unable to exist without it. Even intensive care was shocked.

What’s interesting is that from a patient view, whilst medically this is the worst part, personally it was fine. I was out of it, so unaware of anything.

I could have been on it one day or 10 years, alive or dead. I wouldn’t have known.

Friday, April 10: After nine days on the ventilator, I was brought off. This is the first instalment of difficult times.

So, whilst medically the good news is your body can now breathe, with help of massive oxygen levels, the experience is terrifying.

The best way I can describe it is imagine someone holding a cushion against your mouth and nose. Very occasionally, it slips giving you just enough breath to keep going.

Also a combination of the drugs and Covid-19 bacteria means everyone is hallucinating.

Finally remember we are all on lockdown, so no visitors Just rows of people two feet apart all going through the same terror.

Every day someone dies in front of you or has CPR. Ribs and sternums breaking all around you.

Saturday, April 11: Yippee! Moved off intensive care onto a Covid-19 specific general ward. The breathing and hallucinations continued for everyone – however this is really the start of what I can remember.

A note of caution. In your own mind, the hallucinations are absolutely real, so from here on in, whatever I say may or may not be true. Where I have fact-checked, I will mark it as true.

Otherwise, it could be either.

Another key point is everyone is suffering from a form of PTSD associated with Covid. It is a well-established fact that anyone who has been in intensive care for any reason reacts to the outcome.

Paranoia and active hallucination are part of this. How it is expressed will vary by individual. Some people just make bad decisions, some have pleasant, benign hallucinations and others have terrifying active ones, where people are coming to torture and kill you.

The cause of the hallucinations is the trauma. But it can also be the ongoing fight with bacteria, medication not yet being quite balanced for you, or something as simple as a water infection or constipation.

The benign ones I had are as follows:

I also told all the staff Millie [Peter’s daughter] and Carol were in Finland. Obviously, I couldn’t tell them about Millie dating Romeo Beckham, as I had signed the confidentiality clause.

I would have bet you five years’ wages this was all true.

But wherever I went in the world, weirdly the staff seemed the same and spoke with Manc accents. Who knew?

The horrifying untrue ones that I had were that people were coming to kill me. There was also a wolf in the ward, a giant and men with machetes all coming to do me immediate harm.

All I knew was that I was going to attack first and not be on the back foot.

My only problem was I was still on oxygen, could not walk at all, could not talk, was on a drip for fluids and food an on a catheter, making my fighting skills lower than their previous ‘wet paper bag’ prime.

The horrific hallucinations get worse. I know what I need to do. Yep, pro-actively kill any man, other than my fellow patients, that I come across before they kill me. Ladies. You will be pleased to know you were all off the death list.

Thursday, April 16. 8.45am : Go to physically attack as many men as possible, armed with plastic cutlery despite not able to walk.

Security are called. I explain to the three, strong, experienced guys aged in their 30s that I am going to kill all of them.

Safe to say I was safely restrained in about 30 seconds.

My pal wakes up. He said that whilst my implementation was poor, no one could take away my ambition!

In reality, I felt dreadful.

The ‘all hands to the pump’ approach in the NHS meant some nurses knew what they were seeing was PTSD and some just thought they had a raging madman on their hands.

Carol rang about 9am-ish to ask what type of night I have had. Suffice to say, the answer wasn’t really the one she wanted.

I felt terrible. I know what these staff are going through and felt awful that I had added to their workload and worries. The guilt was crushing.

My son Tom is a junior doctor working in Covid-19 in Sheffield. He had just finished a 12-hour night shift.

He rang in to check my night.

Again, was not the answer he wanted, but he did a great job in talking me down and suggesting that maybe rather than killing all medics, I might find they were there to help me.

I reckon about four to nine months to deal with the physical effects- loads of body muscle gone and about 1st 8lb in weight. Then there is losing the trauma.

I reckon I saw someone die or have CPR daily and within six feet of me. That’s going to take time to process.

They reckon for everyday in an ICU, it will be around a week of recovery afterwards.