Another 15 deaths from the coronavirus have been announced in the UK today, taking the total death toll to 42,647.

The increase is the smallest one-day rise since March 13 – 10 days before lockdown, when there was a single fatality announced.

Scotland has now recorded zero deaths on six occasions in June, while Northern Ireland has had no deaths on 11 separate days, with three in a row up to today.

Hospitals in the East of England did not add any victims to their count today, with the Midlands accounting for the most (seven) and the South West and London recording one each.

Although the number of deaths is always lower on Sundays and Mondays, because of weekend delays to records, experts are convinced the virus is fading in the UK.

One predicted last month that deaths were on track to hit zero by July, while a study published today suggested daily new cases could fall to nought within three weeks. 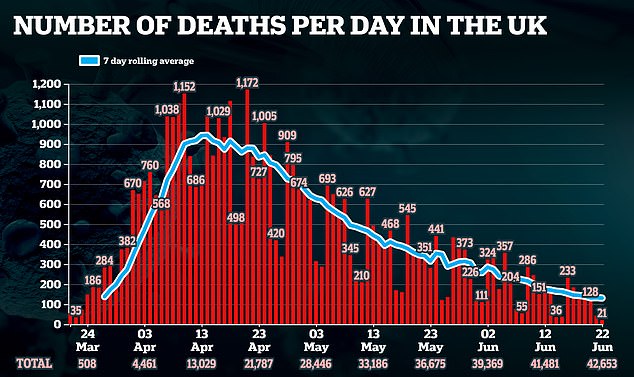 NHS England’s statistics today added 20 more deaths to its tally – but not all of these were included in the Department of Health’s announcement because of a cut-off in the records.

The people who died in England’s hospitals were aged between 55 and 98.

As the UK’s coronavirus outbreak continues to fade, with some researchers predicting the numbers of deaths and positive tests will drop to zero in July, the rest of the world continues to battle the fast-spreading virus.

The World Health Organization confirmed yesterday was the worst day of the pandemic so far on the global stage. 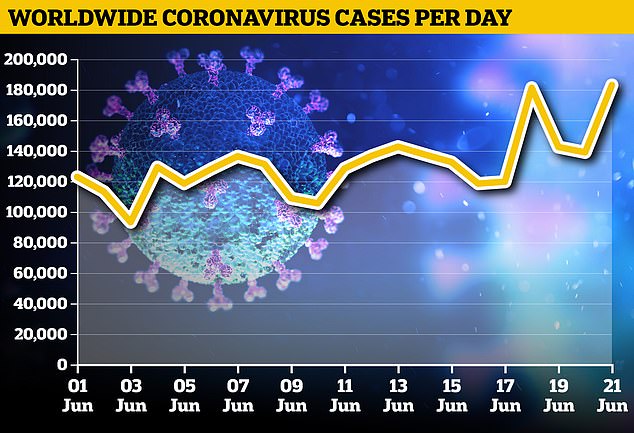 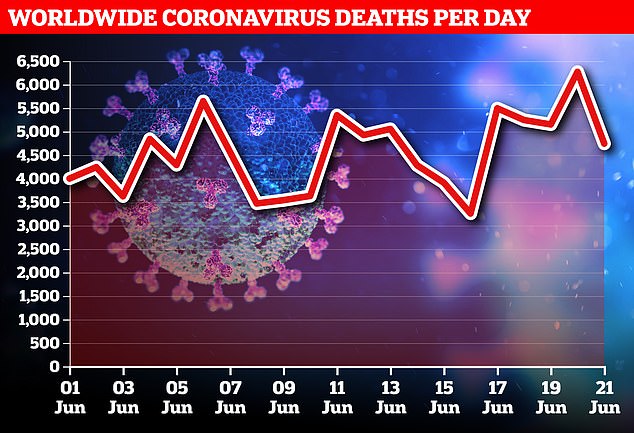 But the actual number of Covid-19 cases since the virus was first spotted in China in December will be drastically higher because of a lack of mass testing and the large proportion of asymptomatic cases – people who don’t know they are ill.

Despite clear progress in containing the virus in some regions, especially those that saw early outbreaks, globally the number of new cases has soared in recent days. Hospitals are scrambling to cope in Brazil, Iraq and India.

Meanwhile a pair of economists from London have estimated that the first wave of Britain’s coronavirus outbreak will end by July 13.

Analysis of the number of people testing positive each day suggests it will hit zero in all four nations within the next three weeks.

Wales will be first to hit the milestone on June 28, according to the projection. Public Health Wales said 100 people were diagnosed with the virus on Saturday.

Northern Ireland will then follow suit on July 2 and Scotland on July 3. England will achieve the feat on July 13, the researchers claim.

But there are thought to be an extra 2,000 to 3,000 people catching the virus each day, with many of them not getting tested or not even realising they are ill.

Experts are all but certain there will be future outbreaks of the disease but improved testing and surveillance mean they are likely to be smaller and better contained than the nationwide crisis that crippled Britain this time around.