Vladimir Putin is using at least three body doubles who have had plastic surgery to look like him, claims Ukraine’s intelligence chief who speculates they are being used to cover up his loss of control in the Kremlin.

Major General Kyrylo Budanov, head of military intelligence, says the Ukraine government is so perplexed by Russia’s disastrous invasion strategy, it wonders if Putin is still taking the key decisions.

He says ‘no matter how bad’ Putin was in the past, ‘he was not an idiot’, but goes on to argue that Russia’s war ‘does not follow any logic’.

Budanov adds: ‘The big question is whether the real Putin still exists?’ 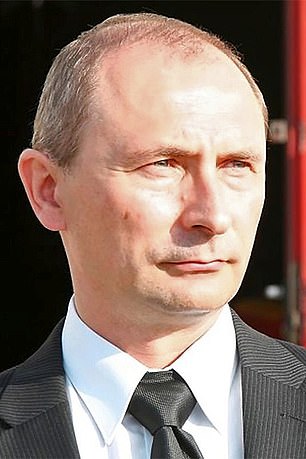 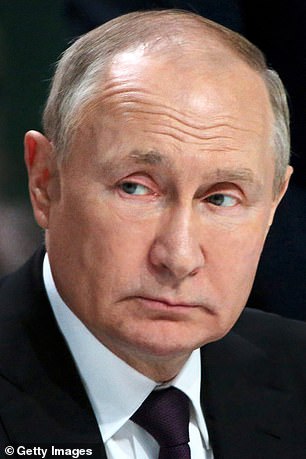 A doppelganger of Vladimir Putin (left) compared with the Russian leader (right). Ukraine’s intelligence chief claims Putin is using at least three body doubles who have had plastic surgery to look like him

The extraordinary suggestion, amid repeated rumours about Putin’s health, came in an exclusive interview with the man seen as Moscow’s Public Enemy No 1 after a series of devastating attacks on Russian interests.

Budanov says they had detected Putin doubles in the past standing in for him on ‘special occasions’, but it is ‘usual practice’ now. ‘We know specifically about three people that keep appearing, but how many there are, we don’t know,’ he says. ‘They all had plastic surgery to look alike.

‘The one thing that gives them away is their height. It’s visible in videos and pictures. Also gesturing, body language and earlobes, since they are unique for every person.’ Budanov refuses to be drawn on whether Putin has disappeared, through illness or after a power struggle. He reveals the Kremlin is running out of guided missiles and believes that if Ukraine recaptures the southern city of Kherson, it could have dramatic consequences for the Russian regime.

He says ‘change is inevitable’ in Moscow, arguing that the arrival of a new political order in Russia is in the interests of ‘the whole civilised world’ and calling on Britain to do everything ‘to speed up the events that will happen anyway’.

‘We are very grateful for the assistance your government is providing,’ says Budanov. ‘We hope the UK will not only continue political, economic and military support but increase it. We are in acute need of air defence systems.’

He admits that Ukraine’s leaders would have discussions over whether to continue pushing their forces over the Russian border. ‘This decision will be made by the head of the state when we get all our land back,’ he says. 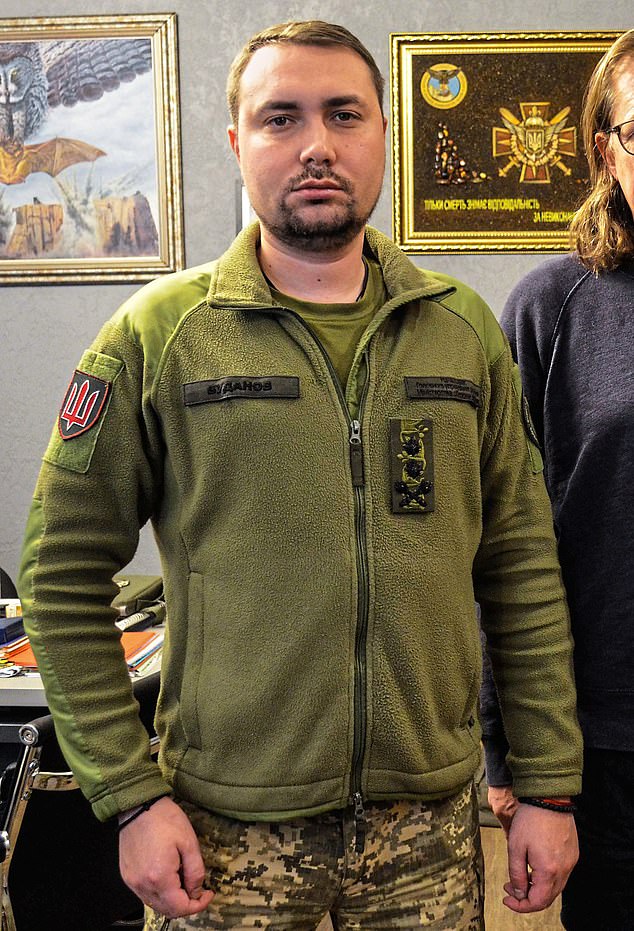 Budanov is an ex-special forces operative who was appointed head of military intelligence two years ago, aged just 34 – then promoted shortly before the war to oversee all intelligence. He has been wounded several times in action.

Russian media has linked him with undercover operations in Crimea, along with another officer who later died in a car bombing, while it was reported in Ukraine that he was targeted in an assassination attempt in 2019.

Last week, a leading Russian analyst praised Budanov’s effectiveness and called for his elimination. ‘Yes, they officially call me Public Enemy No 1,’ he laughs.

We met in a darkened room after I was driven to the location by a senior woman officer. There was a German machine gun on the floor and two knives on his desk, alongside a chess board and a book on Mossad, the Israeli spy agency.

First, we discussed the future of the war, which he predicts will end next year. When I ask if fighting might conclude by the summer he replies, ‘I really hope so.’

His reputation rose before the war as the only top Ukraine figure to publicly back UK and US intelligence warnings that Putin was planning a full-scale invasion as his troops massed on the border.

Now Budanov sees Ukraine’s recapture of Crimea as a ‘personal’ mission, since as a child he spent summers in Sevastopol, the port Russia was allowed to retain after Ukraine’s independence as the base for its Black Sea Fleet. He is adamant the peninsula, illegally annexed by Putin in 2014, will be recaptured and is scathing about those ‘stupidly’ arguing Ukraine should not provoke Russia for fear of escalating the war.

What about the risk of nuclear weapons? ‘It’s scaremongering,’ he says.

‘Nuclear weapons are not weapons – they are the means of deterrence. And Russia knows perfectly well it cannot use them.

‘If you study when they started to threaten with them, you’ll see clear correlation: when everything goes bad for them, they start screaming, ‘We can use nuclear weapons.’ ‘

Budanov is the man Russia blamed for the blast this month on the bridge to Crimea, a key supply route for Putin’s forces in south Ukraine.

Budanov declines to comment on that or earlier attacks on military targets in Crimea, but adds: ‘What goes around, comes around. We are at war with the Russian Federation. We are using all means to cause its defeat.’

He says Putin’s recent annexation of Kherson, claiming it as part of Russia as Ukrainian forces advance on the city, underlines questions over his mental wellbeing. ‘It looks ridiculous,’ he says. ‘They are grandiosely annexing it in Moscow despite knowing they are going to lose it. So my question is: Is Putin well? And is it really Putin? Maybe it is even someone else.’ There have been previous allegations that Putin may have had cosmetic surgery along with recent rumours he is battling serious illness, even cancer.

In July, a Ukrainian intelligence official claimed Putin may have sent a body double in his place for a visit to Iran. It has been suspected former Kremlin leaders such as Josef Stalin and Leonid Brezhnev also used body doubles as decoys.

Budanov believes Ukraine’s anticipated liberation of Kherson will provoke major questions in Russia: ‘How did it happen that Ukraine – a place they have no respect for and never believed to be even a country to take seriously – is taking territories from the Russian Federation? This situation, we believe, would have serious consequences for opinion within the society.’

He admits Ukraine has operatives undercover in Russia. ‘Yes, of course we have,’ he says, adding that ‘the majority of our activity is targeting the Chechen republic’.Chechnya, which tried to break free from Russia after the Soviet Union’s collapse, only to be crushed by Moscow in two savage wars, is led by a brutal ally of Putin’s. Last week, Kyiv’s parliament recognised Chechnya as an occupied territory.

Budanov is convinced that not only will Ukraine win this war, but Putin will be forced from power so this conflict will change the future shape of Russia.

He says the faster Ukraine restores its borders to how they were in 1991, ‘the faster Russia is going to rebuild. It will be a different country with a different leadership with different borders’.

I asked a final question on behalf of a Ukrainian friend: who was his favourite 007? ‘Sean Connery,’ he replies instantly. I suggest he might be Ukraine’s modern version. ‘Thank you,’ he says, smiling – although any future film would not be called From Russia With Love.