UK’s Covid cases RISE for first time in nine days to 40,077… but 9% week-on-week increase is because Wales posted NO figures last Monday – as deaths and hospital admissions stay flat

Covid cases have risen for the first time in nine days after figures were skewed last Monday when no figures were posted for Wales, while hospitalisations and deaths plateaued.

The Department of Health’s daily update showed there were 40,077 positive tests across the UK in the last 24 hours, up by 9.3 per cent on the previous week.

But the week-on-week rise in is because a technical issue at Public Health Wales last Monday, which stopped it from reporting cases and deaths data.

The new infections announced today is lower than the 41,081 daily average recorded across the UK in the last week.

Hospital admissions stayed flat, rising just 0.9 per cent week-on-week to 1,090 and deaths plateaued, rising 5.3 per cent to 40. Both measures lag behind case numbers by a few weeks, due to the time it takes for someone to become seriously unwell after catching the virus.

But the Covid fatality data reported today will be less than the real figure, because health bosses did not receive any data from NHS England — one of the sources of England’s death numbers.

Meanwhile, the number of booster jabs dished out across the UK hit 8million today.

It comes as official figures today revealed unvaccinated people are up to 32 times more likely to die if they catch Covid compared to people who are double-jabbed.

Experts today heralded the results as clear evidence that everyone should get the vaccine. But some warned that the figures may have ‘overstated’ the power of jabs. 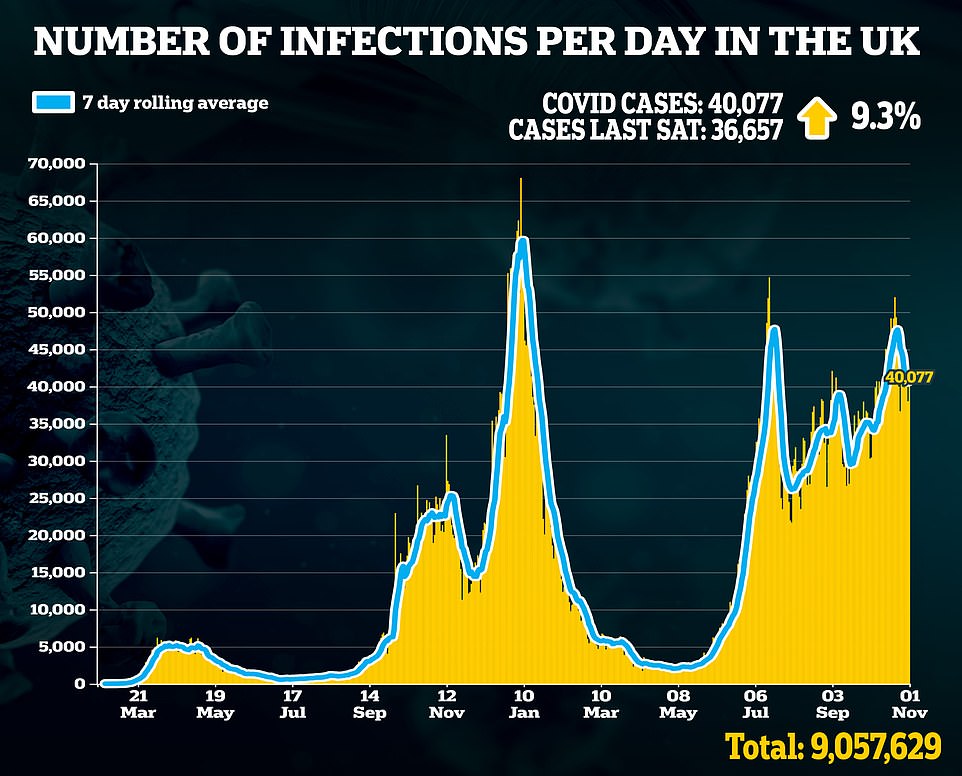 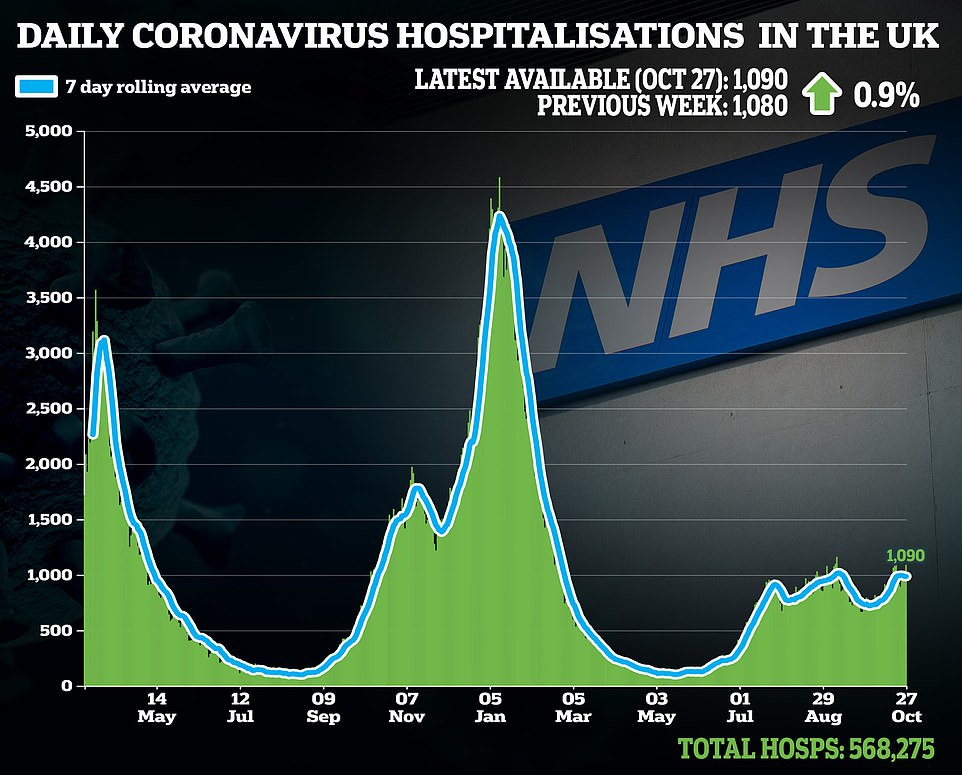 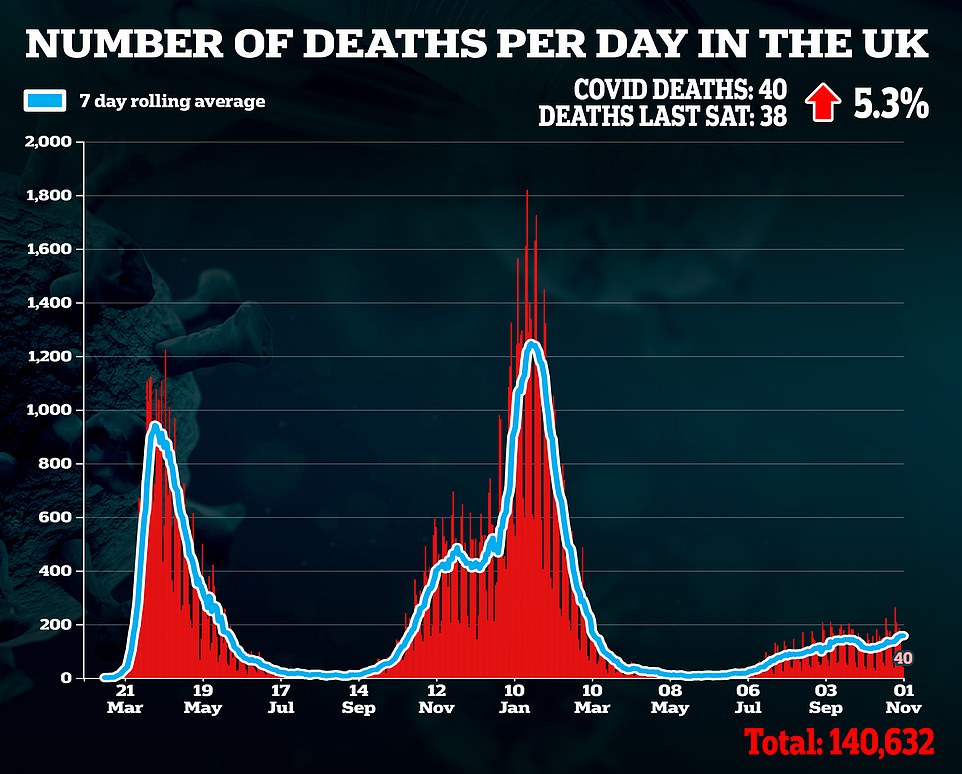 Official data showed England recorded 31,479 new infections, 2,513 cases were confirmed in Scotland, while 4,983 were spotted in Wales and 948 in Northern Ireland. Cases appear to be trending downwards in all four nations.

Delay making Covid vaccines compulsory for NHS workers until April so NHS can get through winter, health chief says

Making Covid vaccines compulsory for NHS staff should be delayed until the spring because of the ‘very, very’ difficult winter ahead, a health chief said today.

Ministers have just finished a consultation on whether doctors and nurses should be forced to get their jabs, with staff refuse potentially facing the sack.

Last week Health Secretary Sajid Javid admitted he was ‘leaning towards’ the ‘no jab, no job’ policy in England, where 100,000 staff are still yet to get their first dose.

But today Chris Hopson, chief executive of NHS Providers, said any deadline should be delayed until April next year so that there are enough workers for winter.

Unions fear hospitals could be left even shorter staffed between January and March — their most difficult time of year — if the plans are brought in.

Mr Hopson also said NHS staff deserved the same ‘five-month’ run up to jabs being made compulsory as those working in the social care sector.

Ministers announced in June care home workers would need to be fully vaccinated or potentially lose their jobs, but gave them until November 11 to get jabbed.

Care worker Louise Akester, 36, from Hull, said today she was resigned to losing her job this week because she was not prepared to get the vaccine.

And Mr Hopson said in Cornwall some homes are already having to draft in nurses from nearby hospitals because of the staffing shortages.

The most recent peak in infections was recorded on October 21, when 52,009 positive cases were reported.

Some 9million positive tests have been registered across the UK since the pandemic began. But the real infection number is many millions higher, due to the limited testing capacity at the start of the crisis and not everyone who catches the virus coming forward for a test.

And the number of people going to hospital who were infected with Covid seems to be plateauing. Some 1,090 people sought NHS care last Tuesday — the most recent day the data is available for — a rise of 0.9 per cent on the 1,080 patients admitted last week.

Meanwhile, 40 people died within 28 days of testing positive for the virus, an increase of 5.3 per cent on the 38 deaths recorded on the same day last week.

And 163,949 people came forward for their booster jab, bringing the total to 8.1million people. The top-up injections, along with first jabs to 12 to 15-year-olds, are a key part of the Government’s Plan A to bring down infection levels.

It comes as the ONS revealed unvaccinated people are up to 32 times more likely to die of Covid compared to those who have come forward for two doses.

Its report found the mortality rate for deaths involving Covid in England among unjabbed adults was 849.7 per 100,000. For comparison, the rate stood at just 26.2 for fully vaccinated people and 105.3 for adults who had only had their first dose.

The statistics body examined death figures between January 2 to September 24 this year, which includes the brunt of the second wave when millions of adults weren’t yet eligible for vaccines.

People were counted as being single- or double-vaccinated from 21 days after each dose because of the length of time taken for immunity to kick in and protect against the virus.

In the report mortality rates were age-standardised, to account for the fact different age groups were vaccinated at separate times.

Older people who are most likely to die if they catch the virus were prioritised in the roll out, with the over-80s invited to get their first dose in December. But those in their early 20s had to wait until June to be called.

There was also a gap of 12 weeks between the first and second dose towards the beginning of the drive to ensure the maximum number of people could be jabbed in the shortest time possible. But in June this was cut to eight weeks. 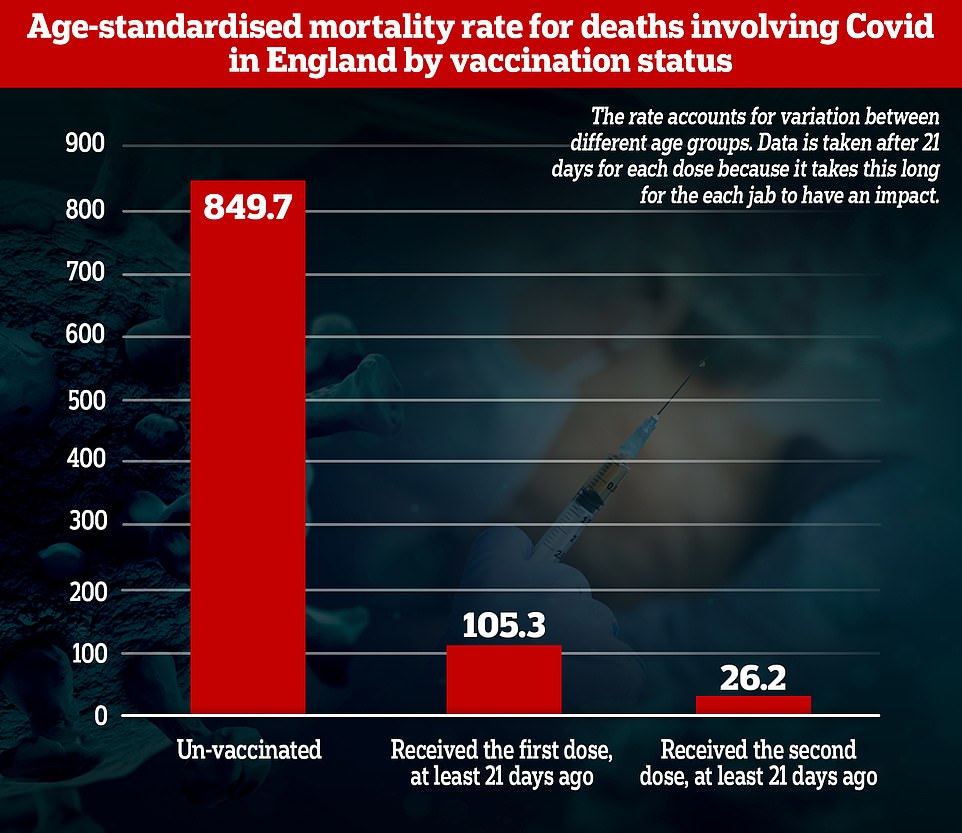 The above graph shows the age-standardised mortality rates for deaths involving Covid in England by vaccination status. They are given as per 100,000 person-years, and are age-standardised to take account of different vaccine roll out times in age groups. They show the unvaccinated are most likely to die if they catch Covid 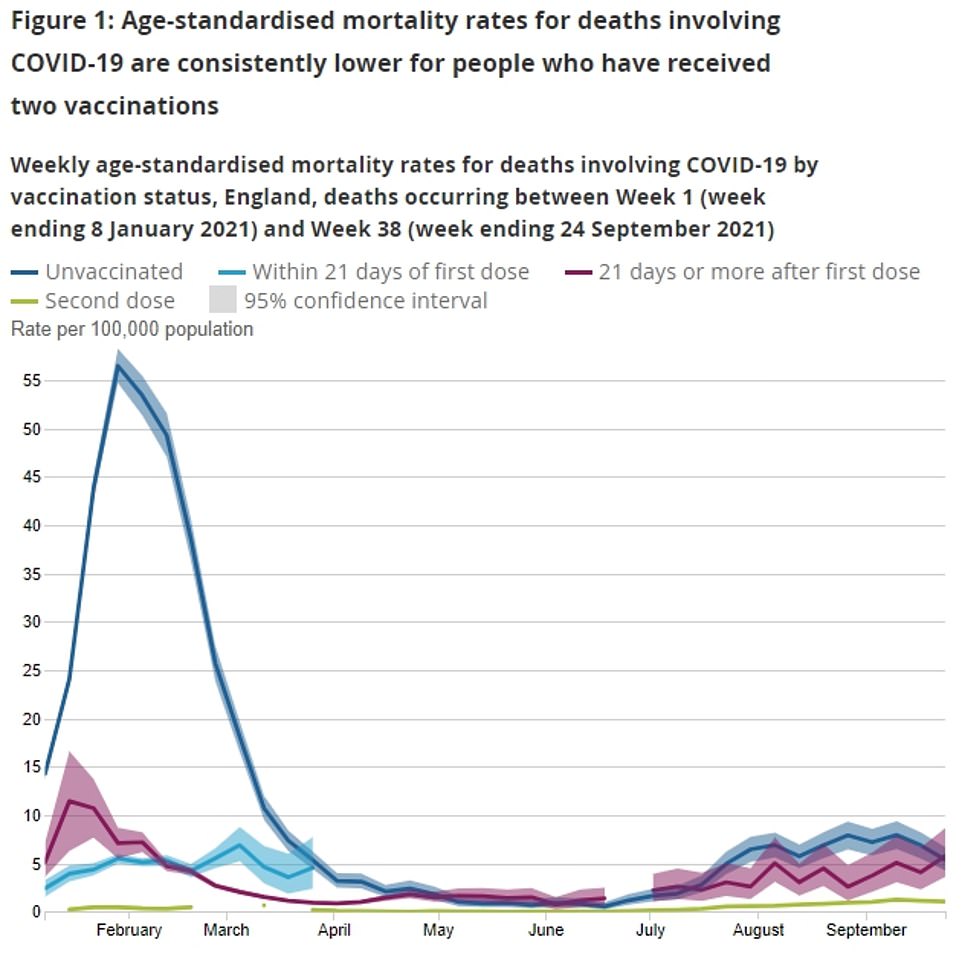 The ONS used figures from the Public Health Data Asset database, which contains people in England linked to the census in 2011 and GP records in 2019, to establish who had received the vaccine. It covers just under 80 per cent of the country’s population.

The report also included data on deaths from all causes — such as heart disease and cancer, not just Covid.

It showed the un-vaccinated were still three times more likely to have died between January to December (2,187 per 100,000) than those who got two doses of the vaccine (783.6).

‘Zero Covid’ scientists have slammed the Government’s coronavirus vaccine advisory panel as being ‘anti-vax’ for considering the benefits of herd immunity over vaccination in children.

Members of Independent Sage, a vocal group of experts who have clung on to the idea of eliminating Covid, accused the Joint Committee on Vaccination and Immunisation of using youngsters as ‘human shields’ to protect adults.

Newly-published minutes from JCVI meetings show that the group first looked at whether letting 12 to 15-year-olds get Covid naturally was better than vaccinating them in spring, months before the rollout was expanded to teens.

Echoing the view of many independent experts, the JCVI accepted allowing the virus to circulate naturally could give youngsters strong immunity and also protect adults — without the risk of side effects from vaccines.

The panel emphasised Covid posed such a tiny threat to children and raised concerns about a heart inflammation condition associated with the jabs in young people.

‘Children rarely develop severe disease or die of Covid; even children with underlying comorbidities have a very low risk,’ the JCVI said in its 32nd meeting on May 13.

‘There are limited data on Covid vaccine use in children; there is a need to consider the mild transient illness of Covid versus potential rare adverse events associated with vaccination.

‘There is an argument for allowing the virus to circulate amongst children which could provide broader immunity to the children and boost immunity in adults.’

The group also considered that children might be better off catching Covid at a young age, when they are at low risk, so that they are less vulnerable in adulthood, as is the case with chicken pox and other viral infections.

Dr Kit Yates, a mathematical biologist at the University of Bath and Independent Sage member, quoted excerpts from a number of JCVI minutes in a lengthy Twitter thread, writing: ‘Anti-vax or JCVI?’

His colleague Professor Alice Roberts, a public health expert at the University of Birmingham, said the views expressed at the meetings were ‘just appalling’. Other Independent Sage members described them as ‘upsetting’.

Commenting on the data John Roberts, from the Covid actuaries response group, said on Twitter: ‘The difference in total mortality between the two groups (1,403.5) is more than the difference in Covid deaths (823.5).

‘That’s almost certainly due to the fact the demographic profile of the unvaccinated experiences higher mortality normally.

‘We know that uptake has been lower in ethnic minority groups and more deprived areas, so in fact I would have been surprised if we didn’t see this difference. So the 32 times might overstate the vaccine effect, but it is still going to be considerable.’

Chris Snowdon, head of lifestyle economics at the Institute for Economic Affairs, warned the statistics may have ‘gilded the lily’ slightly because of the time period used.

He tweeted: ‘This is a dodgy statistic when very few people were fully vaccinated until March. The evidence is good without having to gild the lily like this.’

Almost 50million Britons — or 86.9 per cent of over-12s — have got at least one dose of the Covid vaccine, and 45.7million have received both doses.

The NHS started rolling out vaccines to over-80s, the vulnerable and health and social care workers in December.

It is now also offering them to 12 to 15-year-olds following a recommendation from No10’s vaccine advisers back in September, although uptake has been sluggish.

And booster shots are being offered for the over-50s from six months after their second dose to top-up their immunity ahead of what is expected to be a very hard winter for the NHS.

The report builds on evidence that Covid vaccines slash the risk of hospitalisation and death among people who catch the virus, and its variants.

A report by the UK Health Security Agency — which replaced the now-defunct Public Health England — found last week that jabs work just as well against the more transmissible Delta offshoot as they do on its ancestor.

Scientists said the vaccines slashed the risk of someone infected with AY.4.2 of developing symptoms by 81 per cent.

For comparison, two doses are thought to block around 83 per cent of all people falling ill with the ancestor strain.

The UKHSA said the preliminary results do ‘not suggest a significant reduction in vaccine effectiveness for AY.4.2 compared to Delta’ and admitted the slight drop may be down to chance.

Almost 24,000 cases of the strain have now been spotted in Britain. But the true count could be 10 times higher because laboratories are only sequencing a fraction of all confirmed samples.

Separate surveillance data shows the variant has now been found in all but a dozen parts of England and makes up one in ten new cases — with its proportion having doubled in the space of a month.

Despite statistics showing it’s still outcompeting its ancestor, some experts are now questioning how much more transmissible than Delta the subtype really is. Scientists initially estimated the strain was around 10 to 15 per cent more infectious.

Figures show while cases of the mutant strain are continuing to increase, its curve is flattening off. It is increasing slower than its predecessor did at this point after it was first sequenced.