Relations between London and Moscow were at crisis point last night after a Russian vessel pursuing a Royal Navy warship opened fire in a dramatic incident witnessed by the Daily Mail.

Repeated bursts of cannon fire could be heard off the deck of HMS Defender as President Vladimir Putin’s forces responded to the warship legitimately entering Crimean territorial waters in the Black Sea.

A Russian statement said: ‘The destroyer had been warned that weapons would be used if it trespassed the border of the Russian Federation. It did not react to the warning.’ 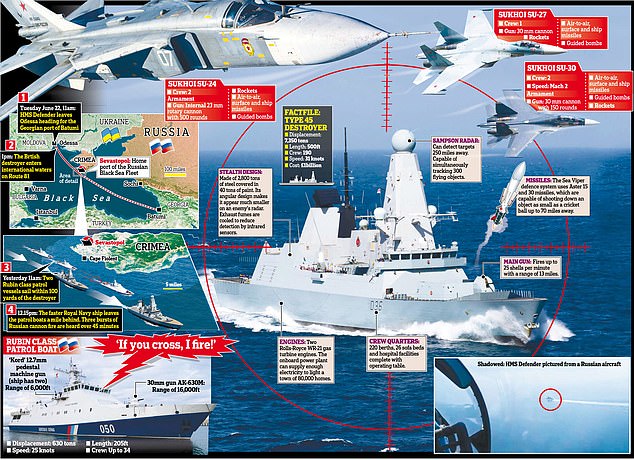 But this claim is almost certainly propaganda as no ordnance of this nature was seen or heard by the crew of Defender or picked up by her hi-tech sensors.

After the incident, the Queen sent a message of ‘best wishes and a safe journey’ to the crew, which was announced over the tannoy by the warship’s captain, Commander Vincent Owen. Russia reacted angrily, calling the warship’s actions an act of ‘blatant provocation’ and summoning the British defence attache in Moscow for a dressing-down.

British officials are expected to discuss the incident with Nato allies to agree a co-ordinated response to future Russian aggression.

The latest incident saw more than 50 interactions with Russian aircraft recorded by Defender in a few hours. Commander Owen told the Mail: ‘That is the closest I have come to a Russian vessel in my 21-year career. I suspect the gunfire was from one of the coastguard vehicles. 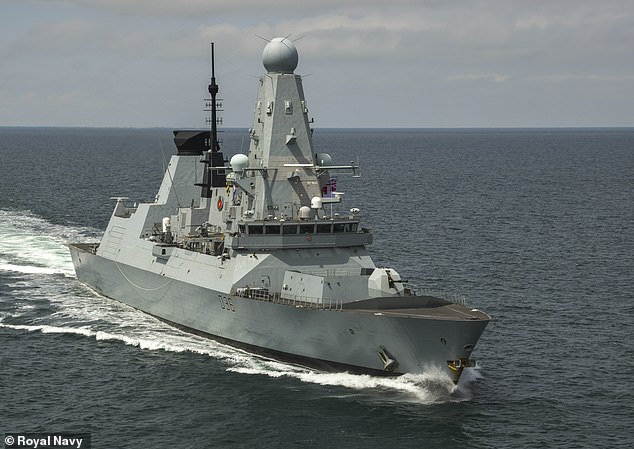 ‘We were confident and non-confrontational and exercising our entitlement to uphold the innocent passage of ships through international waters on a recognised shipping route.

‘I was comfortable we were out of range of its guns as we were travelling at 30 knots to their 21. The 240 men and women aboard this ship performed as I would expect them to. But today has seen an upsurge in the Russian response as closing to that distance of 100 to 200 yards is neither safe nor seamanlike.

‘We’ve also had many Russian jets and an unmanned aerial vehicle interact with us.’

Launched in 2009, Defender is the fifth of the Royal Navy’s Type 45 destroyers. She is also one of the most advanced warships ever constructed.

She belongs to the Royal Navy’s newly formed Carrier Strike Group and her role is to provide air defence for the UK’s new aircraft carrier HMS Queen Elizabeth.

But on Tuesday she broke off from the CSG’s maiden voyage to perform her own delicate, possibly dangerous task. 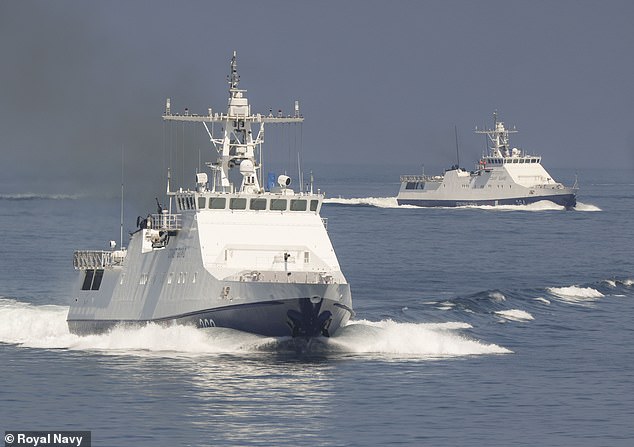 Mr Wallace and the UK’s National Security Council had approved orders for Commander Owen to set course for Crimea, the Ukrainian peninsula invaded by Russia in 2014 and still occupied by President Putin’s elite forces. This includes the much vaunted Black Sea fleet with its heavily armed frigates and submarines and squadrons of supersonic aircraft.

While Britain considers these waters Ukrainian, Russia regards the peninsula as its territory, which its ships and aircraft are entitled to defend, aggressively if necessary.

Yesterday’s incident also came just days after President Putin’s abruptly terminated summit with US President Joe Biden which ended after barely three hours of talks and no agreement on Crimea or other security issues.

Downing Street insisted Defender was taking the ‘most direct’ route from Ukraine to Georgia along an ‘internationally recognised travel corridor’ and was not subject to warning shots fired by Russia. A source acknowledged the Government was playing down the incident to deny Moscow the row it is seeking.

Tom Tugendhat, Tory chairman of the Commons foreign affairs committee, accused Moscow of ‘pathetic grandstanding’. He said the West had ‘grown used to Russia lying’, adding: ‘Putin has stolen so much money from the Russian navy that most of their ships are rust buckets.’