Unemployment will hit 2.6MILLION people in the spring as furlough ends

Unemployment will soar to 2.6MILLION people in the spring as the furlough scheme ends and sends joblessness rocketing to 7.5 per cent from current 4.8 per cent level

Unemployment will surge to 7.5 per cent, putting 2.6million people out of work, when the furlough scheme ends in the spring, Rishi Sunak was warned today.

The Office for Budget Responsibility said that the tens of billions spent on the job retention scheme and billions more spent on business loans and grants had fended off a catastrophe this year.

But it warned of a potential cliff edge when they come to an end in the spring, with the Chancellor in his spending review today offering no suggestion that the schemes would be extended. UK unemployment is currently 4.8 per cent.

Boris Johnson has previously said he wants to UK to be on its way back to normal by Easter, armed with millions of doses of new Covid vaccines.

It its economic forecast, published today, the OBR said:  ‘The support provided to households and businesses has prevented an even more dramatic fall in output and attenuated the likely longer-term adverse effects of the pandemic on the economy’s supply capacity.

‘And the Government’s furlough scheme has prevented a larger rise in unemployment.

‘Grants, loans, and tax holidays and reliefs to businesses have helped them to hold onto workers, keep up to date with their taxes, and avoid insolvencies.

Nonetheless, we anticipate a significant rise in unemployment – to 7.5 per cent in our central forecast – as this support is withdrawn in the spring. 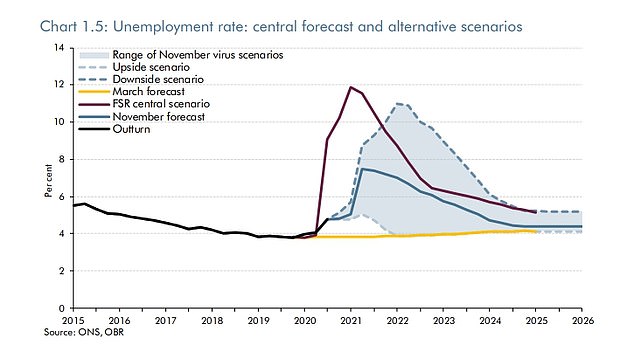 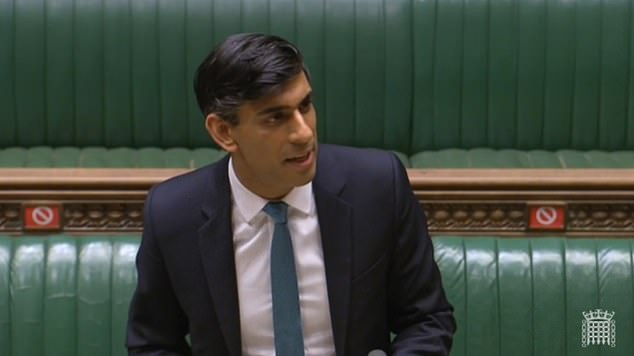 But it warned of a potential cliff edge when they come to an end in the spring, with the Chancellor today (pictured)  offering no suggestion that the schemes would be extended

‘The economic outlook remains highly uncertain and depends upon the future path of the virus, the stringency of public health restrictions, the timing and effectiveness of vaccines, and the reactions of households and businesses to all of these.

‘It also depends on the outcome of the continuing Brexit negotiations. In such circumstances, the value of a single ”central” forecast is limited.’

Mr Sunak told the Commons today that the peak in unemployment would be stark but sharp, adding:  ‘Unemployment is then forecast to fall in every year, reaching 4.4 per cent by the end of 2024.’

This will have the aim of helping more than one million people who have been unemployed for more than 12 months to find new work.

Shadow chancellor Anneliese Dodds said: ‘To recover jobs, Labour called for £30 billion of capital spending accelerated into the next 18 months, focused on green initiatives, supporting 400,000 jobs and bringing us in line with countries like France and Germany. This government’s ambition is for half that number of new jobs.

‘To retrain workers, we needed an emergency programme to support people back into work. But Kickstart has been slow to get started and the skills offer for those over 25 won’t start until April.

‘The Chancellor said at the beginning of his speech that our economic emergency ”has only just begun”. Try telling that to people who’ve been out of work since March.

‘And Restart announced today, must meet three key tests to be effective: it should help people who need it most, not cherry pick. It should be up and running as soon as possible – yet it appears only a fraction of Restart funding will be available next year. And Restart must involve local actors who know their communities, not be imposed from Whitehall.

‘And of course job search support ultimately only works if sufficient new jobs actually exist. That’s why we needed ambitious action to boost our economy and to support our businesses.’

Meanwhile the Chancellor was warned he is on a collision course with public sector workers after he announced a ‘pause’ in rises for many next year.

Rishi Sunak said nurses, doctors and others in the NHS will get a pay rise, but for the rest of the public sector, any increase will be paused, affecting firefighters, teachers, the armed forces, police, civil servants, council and Government agency staff.

Mr Sunak added that the lowest paid public sector staff – those earning below £24,000 – would see their pay increased by at least £250.

Rehana Azam, national officer of the GMB union, said: ‘The Chancellor’s public sector pay freeze will hit key workers who have risked everything during the pandemic.

‘This attempt to divide and rule will put him on a direct collision course with public service workers, and he should know that we fought the public sector pay cap before and we busted it.

‘GMB will not accept more pay cuts for our members at a time when the whole country is relying on them.

‘The Government should tax those who have profited from the pandemic – get them to stump up the cash that has lined their pockets, whilst our keyworkers have kept the UK going.’

‘Despite keeping the country running during the Covid crisis, supplying Universal Credit and helping businesses access the furlough scheme, the Chancellor has justified a pay freeze by pointing to lower wages in the private sector.

‘Today’s announcement has intensified long-standing anger at a decade of pay restraint and increased the likelihood of industrial unrest in the public sector.’

Mick Cash, leader of the Rail, Maritime and Transport union (RMT) said: ‘It is shameful that the Government is employing a policy of divide and rule of private and public key workers, all of whom have risked their lives during the pandemic.

Unite assistant general secretary Gail Cartmail said: ‘The Chancellor Rishi Sunak has delivered a body blow to the public sector workers he has targeted to bear the brunt of the costs of the pandemic with a pay freeze – his so-called ‘pause’.

‘The sop of £250 to the two million public sector workers earning under £24,000-a-year is insulting and compares badly with the inflated sums that the Government has wasted on PPE contracts for those with links to the Tory establishment.’

‘Going after the pay of millions will be a bitter pill for key workers getting the UK through the pandemic and out the other side.’