Up to a FIFTH of Britain’s COVID-19 patients caught the virus while in hospital for another illness, health chiefs admit as senior official says spread of illness within the NHS is ‘concerning’

Up to one in five coronavirus patients in NHS hospitals caught the virus while they were there being treated for something else.

NHS officials have admitted that there has been a significant problem of inpatients catching COVID-19 from staff or other patients at hospitals around the country.

The director of patient safety for NHS England said he was ‘concerned about the rates of… spread within our hospitals’.

So far 24,739 people are known to have died with COVID-19 in hospitals in England and around 175,000 patients and staff have tested positive since the outbreak began.

Thousands of those people may have picked up the virus in hospital, The Guardian reports, even if they were there for completely unrelated conditions.

Bosses in the health service say that between 10 and 20 per cent of hospitalised COVID-19 patients were catching the virus while in a hospital.

This is believed to be unevenly spread across the country, with some hospitals having worse infection control than others, although none have been named. Nationally, in-hospital infection is thought to account for five to seven per cent of patients. 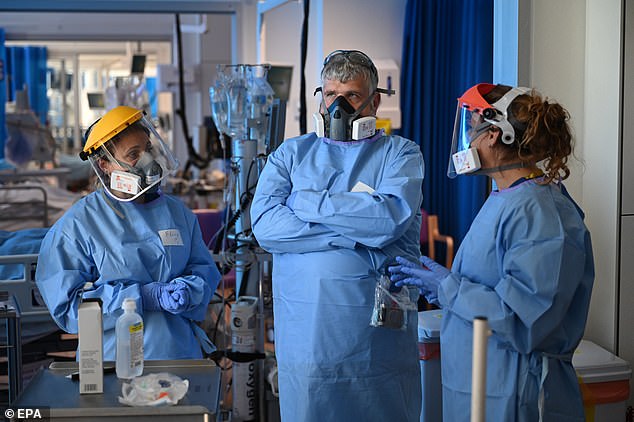 Patients are spreading the coronavirus between themselves and it is also spreading between patients and staff in NHS hospitals, bosses at the health service have warned. Pictured: NHS staff in protective gear at the Royal Papworth Hospital in Cambridge

One anonymous surgeon told The Guardian: ‘Multiple patients my department treated who were inpatients pre lockdown got the bug and died.

‘Obviously the timeline supports that they acquired it from staff and other patients.’

NHS staff and hospital patients have been the focus of government testing efforts since the start of the outbreak but there are still concerns the virus is spreading unchecked.

Some staff members may catch the illness but not develop any symptoms, or develop ones which don’t fit the criteria for a test, and be required to keep working.

There have also been reports of shortages of personal protective equipment, putting medical workers at extra risk of catching the coronavirus from patients.

Meanwhile, the virus is known to be able to live on surfaces for hours or even days so it is easy to transmit in confined spaces where a lot of people are.

Hospitals are giving their best efforts to quarantine infected patients but some do not develop any sign of illness until days after they became infectious.

Dr Aidan Fowler, director of patient safety at NHS England, said he is ‘concerned about the rates of nosocomial spread within our hospitals,’ the Health Service Journal reported.

Nosocomial infection is that which takes place inside a medical facility.

Dr Fowler said around 5,000 NHS staff with symptoms are being tested every day for COVID-19, but efforts to track down and stop infection spread must increase.

‘There’s been an enormous amount of work being done to increase what is a very complex system.

‘We’ve now got multiple labs doing COVID-19 testing on 22 different platforms using a multitude of different swabs. That’s been quite a challenge.’

NHS hospitals are now testing all new patients who are admitted to their wards in a bid to stop people bringing coronavirus in without being detected.

The Faculty of Intensive Care Medicine, a professional body representing critical care doctors, said it was concerned about the findings.

APRIL WAS QUIETEST MONTH EVER IN A&E IN ENGLAND

April was the quietest month ever for A&E departments across England, NHS statistics have revealed.

Only 916,581 emergency department visits were recorded in the month that Britain’s coronavirus crisis peaked – the first time on record the number has dipped below one million.

The number of times people sought emergency help fell by more than half in just two months as COVID-19 gripped the nation.

People have been avoiding hospitals out of fear of adding extra pressure to the NHS or catching the virus while they’re in the hospital, doctors say.

There are also concerns that people with cancer will be delayed casualties of the crisis, with urgent referrals for treatment for the disease down eight per cent on last year.

NHS England, which published the figures, said the falls were ‘likely to be a result of the COVID-19 response’ – an indication that people have been staying away from A&E departments because of the coronavirus outbreak.

This is the lowest number reported for any calendar month since current records began.

Dr Alison Pittard, the dean of the faculty, told The Guardian: ‘I’m very concerned that the incidence of [hospital-acquired] infection has gone up during this pandemic.

‘It’s conceivable that asymptomatic staff may unintentionally infect some patients and that could be a mode of transmission and help explain the rise in intra-hospital infection.’

An NHS spokesperson said: ‘This new global health emergency means hospitals faced an unprecedented challenge, but they have established and effective mechanisms for infection prevention and control.

‘These are continually being supplemented in new ways, as the science regarding the specific features of this coronavirus develops.’

The worrying statistics come as the NHS has started to plan a return to business as normal.

Bosses are keen to get operating theatres open again and start routine treatments in a bid to clear a backlog of patients who had therapy delayed because of the crisis.

Health officials and charities have raised concerns that cancer patients are missing treatments and diagnoses, and that the impact the coronavirus is having on slowing down medical services is putting lives at risk among people who don’t even catch the virus.

CEO of the Nuffield Trust, a health think-tank, said he thought the surgery waiting list in England would have doubled by the autumn because of treatment delays.

Nigel Edwards said hospitals have only been able to carry out around ’15 to 20 per cent’ of elective procedures, meaning up to 1.3million patients are missing out every month.

Last August there were a record 4.41million patients in England on waiting lists for routine operations, a rise of 250,000 from the same month a year earlier.

Speaking at a virtual House of Commons Health and Social Care Committee meeting last week, Mr Edwards said: ‘Between 1.5 and 1.7million people a month start a new care pathway, or at least they did before March.

‘We can already see in the March data, the number of patients starting new pathways or being referred has fallen very significantly.

‘Of course that’s going to be more the case in April and May. Various hospitals I’ve been speaking to say they’ve been able to do 15, maybe 20 per cent of their elective work.

‘So the maths of that is absolutely brutal. It means between 1.2 and 1.3million people each month, who you’d expect to be starting a pathway, who have not been referred yet… it seems very likely we will have doubled the waiting list to over eight million by the late autumn.’