Ministers and officials from every nation will meet via video link on Monday for the annual world health assembly, which is expected to be dominated by efforts to stop rich countries monopolising drugs and future vaccines against Covid-19.

As some countries buy up drugs thought to be useful against the coronavirus, causing global shortages, and the Trump administration does deals with vaccine companies to supply America first, there is dismay among public health experts and campaigners who believe it is vital to pull together to end the pandemic.

While the US and China face off, the EU has taken the lead. The leaders of Italy, France, Germany and Norway, together with the European commission and council, called earlier this month for any innovative tools, therapeutics or vaccines to be shared equally and fairly.

“If we can develop a vaccine that is produced by the world, for the whole world, this will be a unique global public good of the 21st century,” they said in a statement.

The sole resolution before the assembly this year is an EU proposal for a voluntary patent pool. Drug and vaccine companies would then be under pressure to give up the monopoly that patents allow them on their inventions, which means they can charge high prices, so that all countries can make or buy affordable versions.

In the weeks of negotiations leading up to the meeting, which is scheduled to last for less than a day, there has been a dispute over the language of the resolution. Countries with major pharmaceutical companies argue they need patents to guarantee sufficiently high prices in wealthy nations to recoup their research and development costs.

Even more fraught have been attempts to reinforce countries’ existing rights to break drug and vaccine company patent monopolies if they need to for the sake of public health. A hard-fought battle over Aids drugs 20 years ago led to the World Trade Organization’s Doha declaration on trade-related intellectual property (Trips) in favour of access to medicines for all, but the US, which has some of the world’s biggest drug companies, has strongly opposed wording that would encourage the use of Trips.

The hunt for a coronavirus vaccine – a perilous and uncertain path

Campaigners say the resolution expected to be passed by the world health assembly’s 198 member states is along the right lines, but too weakly worded.

“In general, it is a disappointment, appalling really. There was better text that was rejected,” said Jamie Love, the director of the NGO Knowledge Ecology International. “The US, UK, Swiss and some others pushed against the WHO taking the lead in pushing for open licensing of patents and know-how for drugs and vaccines.

“In a global crisis like this, that has such a massive impact on everyone, you would expect the WHO governing body to have the backbone to say no monopolies in this pandemic. It’s one thing for a country to use its economic clout to buy preferential access to drugs or vaccines. It’s another to prevent others from manufacturing and expanding global supply.”

Oxfam’s health policy manager, Anna Marriott, said: “This week’s letter calling for a people’s vaccine, which was signed by more than 140 world leaders and experts, sets the bar for the scale of ambition we need to meet the challenge before us. 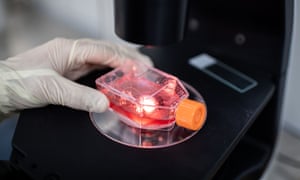 “As we approach the final stages of this resolution, we need to see health ministers raise their game to match this ambition. Any government that tries to block or dilute this resolution is risking lives and standing on the wrong side of history.”

A UK government spokesman said: “The UK has long supported affordable and equitable access to essential medicines, including in low and middle-income countries. We continue to support public-private partnerships for product development, and approaches such as non-exclusive voluntary licensing which promote affordable access for all while also providing incentives to create life-changing vaccines.”

Costa Rica will launch a voluntary patent pool later this month. Its president, Carlos Alvarado Quesada, said at the WHO last week: “The pandemic attacks the same in each country regardless of whether you have the resources or not. It attacks people around the world in the same way,.

“Only together with multilateralism, with that sort of leadership, can we defeat coronavirus, not with nationalism and being selfish. It is the time for solidarity. It is the time to work together to show humanity the best that we are made of, the opportunity to show our brotherhood as a whole.”

Coronavirus vaccine: when will we have one?

Wellcome published a poll on Sunday of 2,000 people in the UK which found 96% supported the idea that national governments should work together to ensure that treatments and vaccines can be manufactured in as many countries as possible and distributed globally to everyone who needs them.

The International Federation of Pharmaceutical Manufacturers and Associations (IFPMA) trade body says companies already share their intellectual property with low-income countries. “We have not been included in these discussions and have limited understanding of what exactly is being proposed, and how it is different from the various institutions already facilitating sharing of data, know-how” and intellectual property, it said in a statement.

The IFPMA also pointed out that it was already a founding partner in the ACT Accelerator, a global partnership designed to speed up research and development of promising and affordable interventions.

“The creation of yet another new platform appears unneeded and would direct resources and energy away from key objectives. We have never needed innovation so much as now and this is probably the worst possible time to weaken intellectual property,” it said.

The invitation of Taiwan to the assembly, which has been blocked in recent years by China, has also triggered a dispute. Taiwan has a lot of support from countries including the US that say its handling of Covid-19 has been exemplary and it could teach the world a lot. Beijing, however, is pressuring other countries to block Taiwan, arguing it can only be represented if it accepts it is part of China.