Utah Gov. Gary Herbert declared a state of emergency Thursday evening after “civil unrest” broke out in Salt Lake City in reaction to two police officers being cleared of wrongdoing in the May shooting death of an armed suspect.

Images posted online showed dozens of handprints, in what appeared to be red paint, splattered across a sign at the entrance to the Salt Lake County District Attorney’s Office.

The situation was declared an unlawful assembly after demonstrators started smashing windows at the DA’s office, The Deseret News of Salt Lake City reported.

“It was my sincere hope that the protest tonight would remain peaceful as it has night after night,” policed Chief Mike Brown wrote on Twitter. “Sadly, as they began to break windows at @SLCountyDA office, we declared it an unlawful assembly.”

“We are willing to allow some vandalism but then they returned and started to breach windows,” Brown told KSL-TV. “We just cannot allow that to happen.”

It was District Attorney Sim Gill who announced earlier in the day that officers Neil Iversen and Keith Fortuna would not be prosecuted for the death of Bernardo Palacios-Carbajal, whose death May 23 – after being shot as much as 15 times by police – has become the focus of the state’s protesters opposing police brutality. 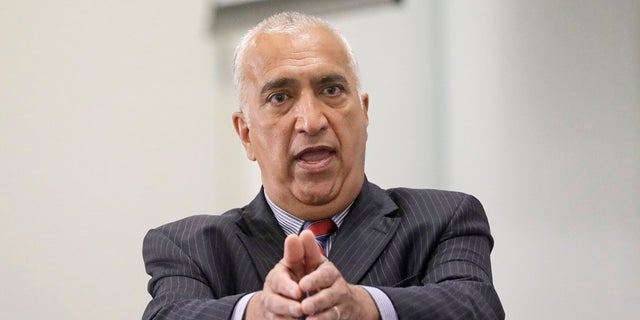 Peaceful protests had been held in Salt Lake City for weeks in anticipation of a decision in the case, the Salt Lake Tribune reported.

Among the red handprints outside the DA’s office was a flyer with an image of Palacios-Carbajal.

The governor’s emergency declaration closed the grounds of Utah’s Statehouse to the public until at least next Tuesday, FOX 13 of Salt Lake City reported.

Vandalism had occurred outside the Statehouse during a previous protest following the May 25 death of George Floyd in Minneapolis, the station reported.

According to FOX 13, Thursday’s unrest began with chalk and paint messages outside Gill’s office around 6:40 p.m. local time, evolving into a “declaration of unlawful assembly” around 8 p.m. as Salt Lake City police in riot gear struggled to break up the crowd.

About 75 officers were deployed to the area by 8:25 p.m., the station reported.

Soon after, the crowd had dispersed and police declared the DA’s office a crime scene, FOX 13 reported.

In May, the responding officers had seen Palacios-Carbajal at the Utah Village Motel and chased him after someone called police to report an apparent armed robbery, authorities said. They yelled at him to stop and drop the weapon, Gill said.

Video footage shows Palacios-Carbajal picking up what the officers said was a gun after tripping and falling several times while fleeing, Gill said, adding that Palacios-Carbajal seemed determined to hold on to his gun.

"The desire to retrieve the gun was greater than the desire to run away,” he said. "If he had left it, the officers said the imminence of that threat would have been abated for them and they would not have used that force.”

Fox News’ Louis Casiano and The Associated Press contributed to this story.