Caracas: Venezuelan President Nicolas Maduro said on Friday that a "US spy" had been captured spying on the largest refining complex in the country.

In a live state TV broadcast, Maduro said the man was arrested on Thursday in the north-west state of Falcon where he was spying on the Amuay and Cardon oil refineries. 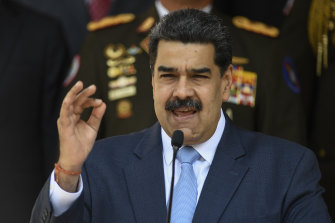 Venezuelan President Nicolas Maduro is engaged in a war of words with the United States.Credit:AP

Maduro did not give further details, but said the detainee was giving a statement in custody. The country is going through a severe fuel shortage crisis.

Neither the US State Department nor the White House immediately responded to requests for comment.

Amuay and Cardon make up the Paraguana Refining Centre, which has a nominal processing capacity of 971,000 barrels per day. Both have experienced multiple outages in recent years that the opposition blames on mismanagement and lack of maintenance.

Word of the alleged spy came after a Venezuelan court last month sentenced two former US Green Berets to 20 years in prison for their role in a failed incursion in May.

Maduro also said that in recent days security forces had foiled a plot to cause an explosion at another oil refinery, El Palito in Carabobo state. He did not elaborate.

Hit by US sanctions that have exacerbated acute fuel shortages, the government on Friday announced a new fuel distribution initiative and said it was planning new refining projects, without providing further details.