The Victorian government is set to ask the Commonwealth for more Australian Defence Force members to assist with cleaning up after a deadly storm that lashed eastern parts of the state.

More than 5000 Victorian homes and businesses are still without power more than a week after the storm, which caused major damage and left two people dead. 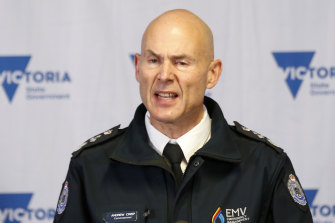 Emergency Management Commissioner Andrew Crisp said there could be minor flooding of the Genoa and Bemm rivers in far East Gippsland due to heavy localised rain of up to 60 millimetres on Friday and over the weekend.

He said in already storm-damaged areas, like Trentham and the Dandenongs, meteorologists are predicting wind gust speeds of between 60km/h and 80km/h, which could cause unsteady trees to fall.

“Wind speeds, as we know, will play a significant issue with regards to risk to communities when you look at the saturated areas where we have trees that are still unstable,” he said.

More than 5100 homes are still without electricity according to electricity provider Ausnet. Around 2000 people are expected to be without power until July 10. 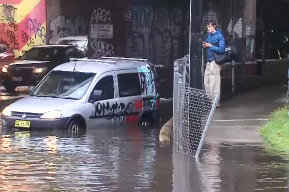 A driver has had to escape their car in Dudley Street on Friday morning after becoming caught in storm water .Credit:Nine News

On Thursday, the Victorian state government announced a hardship payment of up to $1680 a week for those without power from June 17.

Meanwhile, in Melbourne on Friday, streets near the CBD flooded and stranded drivers.

About 1.5 millimetres of rain had fallen over Olympic Park since 9am on Friday, while places like Mt Baw Baw in Victoria’s Alpine region received more than 6mm of rain in three hours, according to the Bureau of Meteorology.

One driver along Dudley Street in West Melbourne, just north of the city’s CBD, had to abandon their car in the middle of the road after flood waters rose.