One in eight of Victoria's coronavirus 'mystery' cases was erroneously deemed to have come from an unknown source, with 515 cases reclassified on Saturday thanks to a new contact tracing algorithm.

The algorithm, devised by Health Department epidemiologists, combed through old cases and managed to draw links with other cases through factors such as workplaces and shared locations. 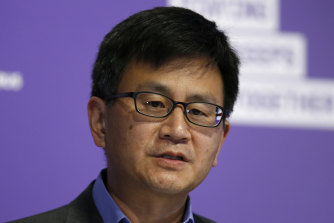 Deputy Chief Health Officer Allen Cheng said Victoria's 'mystery' case tally since the start of the pandemic had consequently dropped from 4277 to 3762 on Saturday.

He admitted this was primarily due to Victoria's maligned contact tracing system becoming overwhelmed as the second wave peaked at 725 new cases in one day and over 7000 concurrent active cases.

"I think clearly it was a very busy time … and at the time our focus was on trying to make sure of absolute close contacts and making sure that we tried to control it that way, at that time," Professor Cheng said.

"But now that we've had the luxury of sitting back and developing algorithms to look back through the data, we can start to clean up the data. It's obviously not of any consequence for what happened back then but it is important for us going forward to have a complete and accurate data set to do analyses from."

A parliamentary inquiry into Victoria's contact tracing will begin on Monday, where Chief Health Officer Brett Sutton will be among those giving evidence.