Victorians are owed a nation’s gratitude

On my daily sanity walks this week I saw Melburnians smiling. Not everyone, of course, but more than the week before, and the week before that. It’s hard to be certain, admittedly – the lower halves of faces remain illicit and will for some time to come – and nearly every recent headline assured me this is impossible, but I’m getting better at reading cheekbones and eyes (and indeed headlines) in this exhausted, frayed city. A city taking its first collective but masked exhale since June. 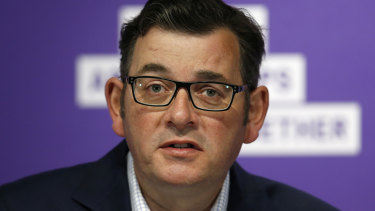 The sun is beginning to pierce the iso brain fog. The passage of time is beginning to make a semblance of sense again. Tracksuit pants are still enjoying their unlikely season of high-street dominance, and long may that continue, but our manes are finally being tamed; sought-after hair appointments are the Metallica tickets of the new world. Most importantly, though, we recorded zero new coronavirus cases on Monday.

Why this happened originally is extremely important. But it’s also not the only thing that’s important. That we shouldn’t have needed to endure this prolonged existential crisis does not negate the fact that we did endure it. And endured it remarkably well, with far less help and encouragement than we perhaps could have expected from those with the task of helping and encouraging.

This is not about Victorian pride or parochialism: it’s about acknowledging the suffering, and that the suffering had a purpose. That all the little heartbreaks of Melbourne’s lost year have for now stemmed the bleeding of the larger heartbreak, to a degree not seen almost anywhere else in the entire world. We’ve surfed this second wave all the way to the shore and I think we might have left some beers on the sand.

As much as the public discourse wants to make this moment about politicians, one in particular, it needs to also be about people. Exhausted parents, unknowingly stoic small children, anxious grandparents, struggling business owners, stressed students, insanely bored teenagers, the previously and the recently unemployed; the lonely, the bereaved, the exhausted, the angry, and the sad.

Nearly 5 million Melburnians, and 1.5 million people in rural Victoria, are owed a nation’s gratitude. This city is not owed scorn. Nor derision. Nor any undermining of its achievements and collective trauma. It is owed a semblance of understanding – or at least a good faith attempt at understanding, because perhaps that’s all we can really hope for – without any underlying connotations or agendas or dog-whistles.

Everything Melbourne has endured, it has done so on behalf of the rest of Australia. Why sections of our media and our elected officials refuse to acknowledge the extraordinary will of this many ordinary Australians would be bewildering if the partisan lines weren’t drawn with such heavy-handed crayon.

The outward facing media narrative has skewed towards the non-compliant and the voices of the privileged. But that’s clearly only a self-perpetuating fraction of the community-minded whole. The annihilated case numbers of the past 82 days prove as much. To argue otherwise in the face of data this conclusive is like arguing climate change isn’t real (which, incidentally, the same people are doing).

This isn’t over by any means, but a turning point has been reached. There’s no good reason why the collective mood can’t teeter towards optimism, towards hope. We can start dreaming in earnest of that first tap pint. We can marvel as tiny companionable Zoom boxes transform into flesh and blood humans. Social media can become less than the entirety of our social lives. We can start imagining the first hugs, perhaps even on Christmas Day, with no-longer-newborn family members that haven’t legally or safely been allowed into our lives and arms yet.

Melburnians have lost so much this year: time, sleep, hair, plans, the bloody Grand Final, sanity, jobs, comfort. Freedoms once but hopefully never again taken for granted. Most importantly: 817 lives. These wounds will not heal quickly.

We’ve been forced to gain a bit, too: stress, weight, a more complete understanding of Netflix’s library, anxiety, a newfound appreciation for the park, debt. The realisation that life’s small pleasures really aren’t all that small when you think about it long enough … but I think we’ve all had enough perspective for now, thank you very much!

Once upon a time historians oversimplified the churn of civilisation and the rise and fall of empires down to the actions of a few kings and conquerors, but that’s only ever been a fraction of the truth. The same should not be allowed to happen here.

Daniel Andrews is arguably this tale’s main character – whether villain or hero or a bit of both in the end – but this is clearly an ensemble piece. And not only was your role larger than anyone gave you credit for, you nailed it. I might be a contrarian critic on this point, but I think you stole the show.

David Milner is a Melbourne writer.