Violent drug addict and Islamic terror sympathiser, 43, who stabbed father to death in ‘motiveless’ murder while on bail for axe attack is jailed for 30 years – as victim’s family say he was ‘failed’ by justice system

The wife of a man who was stabbed to death by a violent drug addict while he was out on bail has said her partner was ‘failed’ by the justice system.

He then stripped his body naked and covered him in bleach before stuffing him in a suitcase and dumping him in a park near his home in Walthamstow, east London.

Marks on the body also suggested Hand had tried and failed to dismember him, the Old Bailey heard.

The horrific killing happened just 31 days after Hand, who was previously diagnosed with paranoid schizophrenia, was released on court bail charged with attacking his friend Graeme Bennett, 43, with an axe some eight months earlier.

‘If he (Hand) had not been released from prison, this would not have happened.’

She added: ‘We had plans and dreams to fulfil as a family.

‘Some nights I cannot cope with the ordeal.’

Ms Battye described the victim, who arrived to the UK from Mauritius in 2004, as a likeable, kindhearted, bubbly and intelligent man and proud father to their young child.

There was no suggestion the murder was linked to any form of fundamentalism.

Following an Old Bailey trial, Hand, who the court heard is a heroin addict, was handed a minimum 30-year sentence after being found guilty of murdering Mr Moussa, the attempted murder of his first victim Mr Bennett, and of having an offensive weapon. 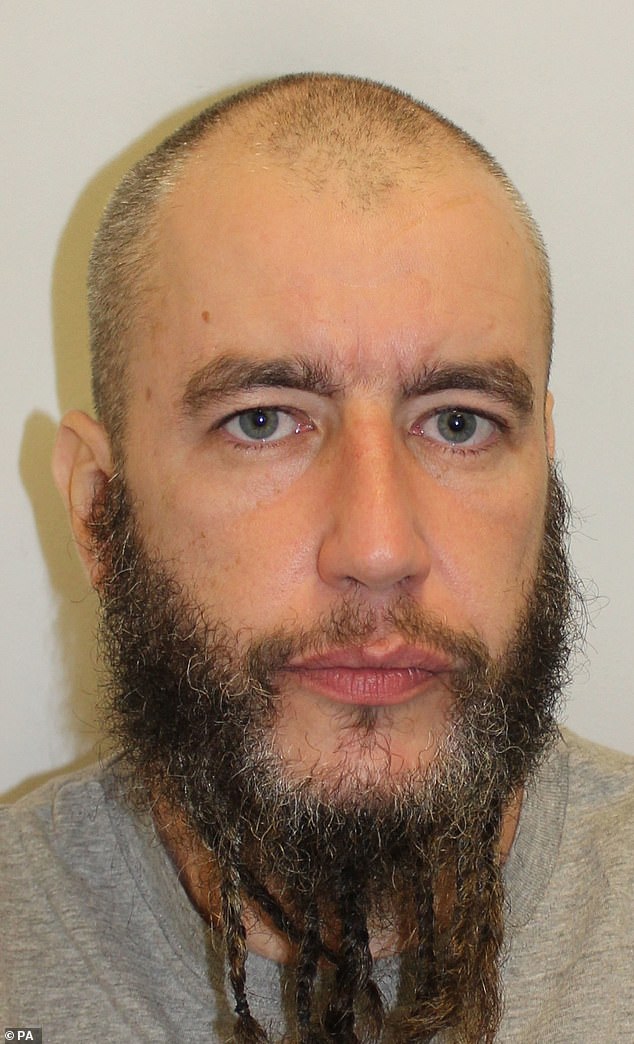 His first victim Mr Bennett described in his statement how he felt ‘unsafe’ following the ‘out of the blue’ attack – which saw Hand hack at his head and wrist with an axe.

He added that he had moved in with his sister because of his anxiety.

The court heard he felt ‘betrayed’ by Hand, who he had considered a friend, and sought an apology and acceptance from him for what he had done.

Judge Rebecca Poulet QC, who jailed Hand for life with a minimum term of 30 years, told Hand: ‘Both of your victims were known to you but your terrible actions remain motiveless and unexplained.

‘This court knows nothing of what triggered your conduct save only that you have been addicted to heroin for the last 11 years.

‘This terrible offence took place just one month after you had been released on bail as you awaited trial in respect of a brutal attack on Graeme Bennett, a man who had been your good friend after 24 years.’

Referring to Ms Battye, the judge added: ‘Your actions have deprived her of a loving partner and her two-year-old child of his father.

‘Not surprisingly she feels let down by the justice system as a result of Richard Hand’s release on bail.’

The judge said the murder was also aggravated by Hand’s attempt to dismember the body before hiding it in undergrowth.

She sentenced Hand to a further 22 years for attempted murder and one year for having an axe, all to run concurrently with the life term. 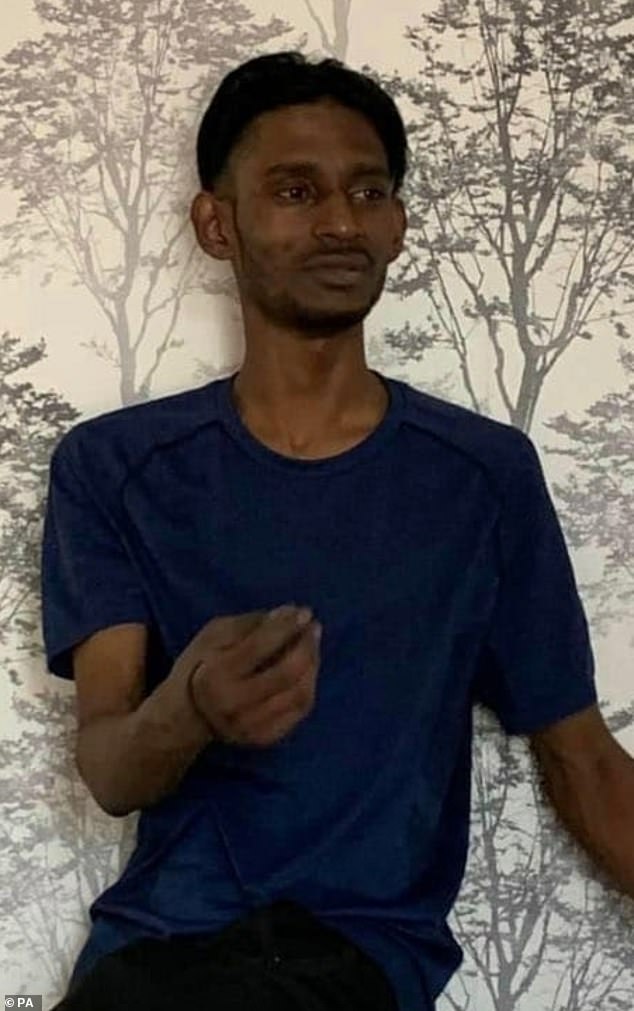 Following an Old Bailey trial, Hand, who the court heard is a heroin addict, was handed a minimum 30-year sentence after being found guilty of murdering Yassar Moussa (pictured), the attempted murder of his first victim Graeme Bennett, and of having an offensive weapon

Earlier, the court heard that Hand had previous convictions dating back to 2006 when he was given a suspended sentence for having a bladed article.

The offence arose after he was stopped at Heathrow Airport while trying to book a flight to the Middle East.

Hand said he had converted to Islam and expressed sympathy for the aims of Islamic terrorism, the court heard.

In 2007, he was given a four-week jail sentence for assaulting a neighbour, who he threatened and grabbed by the throat.

In mitigation, Mark Graffius QC said there was no suggestion the murder was linked to any form of fundamentalism.

Hand had been sectioned in the past and been diagnosed with paranoid schizophrenia, he said.

But Mr Gaffius said: ‘We do not seek to persuade the court his mental health reduces his culpability.’

The court had heard how Hand attacked Mr Moussa at his home in Falmouth Way, Walthamstow, on August 22 last year.

Afterwards, he attempted to cover his tracks by stripping Mr Moussa’s body and covering him in bleach before stuffing him in a suitcase.

The next day, Hand dragged the case to St James Park and hid the body in heavy undergrowth near a small brook.

It was only by chance that the body was discovered on August 24 as Environment Agency workers cut back the undergrowth in the park for the first time in 10 years.

Prosecutor Tim Cray QC said: ‘The body had been put there to conceal it and, save for the long odds chance that this was the first day in a decade for clearing the bank, it might never have been found, or found in any state that would have led to the identification of the victim.’

An examination of the body found Mr Moussa had been fatally stabbed in the neck and a wound to his knee suggested a failed attempt at dismemberment.

The body smelt strongly of bleach, as if it had recently been washed.

Police used CCTV to track the victim’s last movements to the defendant’s address.

His phone was last used in the vicinity after he had been in contact with Hand.

Later, the defendant was seen asking about bleach in a nearby shop, jurors were told.

On August 23, he was caught on CCTV dragging the heavy suitcase towards the park.

On the return trip, the suitcase appeared ‘much lighter’, the court was told.

When officers spoke to Hand, he claimed to have heard the victim was strangled or stabbed in the neck and dumped naked – details that were not publicly known.

During sentencing on Tuesday, Mr Moussa’s partner Lauren Battye told the Old Bailey (pictured) that the victim, who arrived to the UK from Mauritius in 2004, was a likeable, kindhearted, bubbly and intelligent man and proud father to their young child

Mr Moussa’s blood was identified inside the defendant’s flat and his clothes, a bent knife and cleaning material were found in communal bins.

Hand denied being responsible for the killing of Mr Moussa, who he knew as a fellow drug user.

He claimed two other men had been at his flat and he returned to find a pile of clothes and bloodstains in his living room.

Jurors were told that at the time of the killing, Hand had been on court bail for the attempted murder of Mr Bennett on January 29 last year.

Hand had been at the victim’s home in Streatham Hill, south London, when he launched an axe attack ‘out of the blue’.

Mr Bennett, who had invited Hand to help him hang some pictures, was struck twice to the head, fracturing his skull, and once on the left wrist.

Mr Cray said: ‘This was a vicious attack by the defendant that Mr Bennett was lucky to have survived.’

Despite incriminating forensic evidence, the defendant again denied being responsible.

Hand was arrested and charged on January 30 and remanded into custody.

But he was released on bail after a hearing at the Old Bailey on July 22 2020.