Amsterdam today ordered the wearing of face masks in busy places including its famed red light district in order to limit the spread of coronavirus.

The move comes despite Dutch public health authorities saying yesterday there was still not enough evidence about the effectiveness of masks to warrant a nationwide order.

The Netherlands is one of the last holdouts along with the Nordic nations against widespread use of masks, with many European nations having imposed tougher rules for the wearing of face coverings. 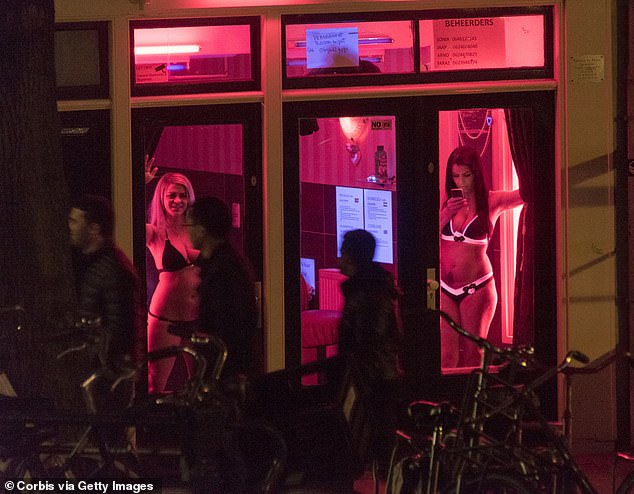 Sex workers are seen behind windows at the red light district in Amsterdam, Netherlands, 24 April 2015. Dutch authorities announced today that visitors to the capital’s red light district, as well as other areas of Amsterdam and the central city of Rotterdam, will be ordered to wear face masks

Amsterdam safety authorities said wearing a non-medical mask would now be mandatory from August 5 in busy places including De Wallen – the canalside district where sex workers ply their trade from behind glass-fronted, red neon-lit booths.

In the port city of Rotterdam it will also be compulsory from August 5 to wear masks in key shopping districts and covered malls.

The rules apply to people aged 13 and over in both cities. Those who do not comply risk a fine, the size of which has yet to be determined. 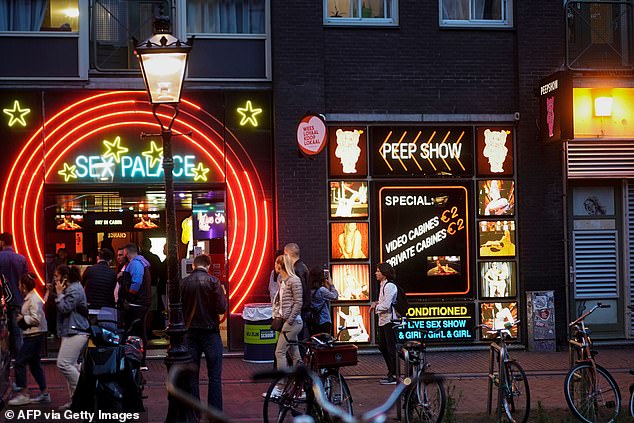 People walk in the red light district of Amsterdam on July 1, 2020, when Dutch brothels reopened after a long coronavirus shutdown

On Wednesday, the Dutch government’s Outbreak Management Team said it saw ‘no evidence’ to make the wearing of masks compulsory but said regional authorities may take different measures.

But Prime Minister Mark Rutte issued a fresh appeal for people to stick to social distancing measures after coronavirus infection rates rose again over the past week, especially among young people.

The Netherlands has reported a total of 6,145 deaths – half of whom were people aged 83 years or more – and more than 53,000 cases since the outbreak began.