Tallahassee: A string of voter intimidation emails that were purportedly sent by the Proud Boys, a self-described militia group, were reported to Florida state and federal law enforcement officials on Tuesday morning, according to the Supervisor of Elections in Alachua County, Florida.

Alachua County officials were made aware of the emails on Tuesday morning. In one of the emails, the sender told a voter to "vote for Trump on Election Day or we will come after you," according to a copy obtained by the Miami Herald. 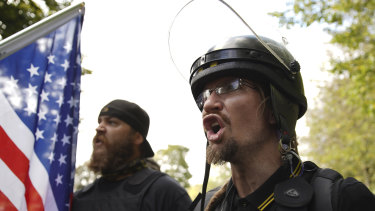 Members of the Proud Boys in Portland, Oregon.Credit:AP

"Change your party affiliation to Republican to let us know you received our message and will comply," the email said. "We will know which candidate you voted for. I would take it seriously if I were you."

The email shows a sender with the address, [email protected] But officials have not pointed to any evidence that the email came from the far-right group.

CBS News and Vice News have each reported that the source code embedded in seven emails shows the message originated from IP addresses linked to servers in Saudi Arabia, the United Arab Emirates and Estonia.

Proud Boys Chairman Henry "Enrique" Tarrio Jr. said the email was "spoofed" and that he notified the FBI and Barton to tell them the group was not behind the emails.

"There is no reason for us to send an email like that. To whoever did this, I condemn these people," Tarrio said.

Barton said her office was working with local, state and federal law enforcement officials, including the Federal Bureau of Investigation and the US Department of Homeland Security to look into the emails.

The Florida Department of State's Division of Elections has been notified, too, Kim Barton, he Supervisor of Elections in Alachua County said.

"If any individual engaged in any form of voter intimidation, our office will refer the case to state and federal law enforcement," she said in a press release.

Florida Department of Law Enforcement officials did not immediately respond to request for comment.

A University of Florida university student, who didn't want to give her name because of concerns about retribution, said she was sitting in a common area working on her laptop about 10.30am on Tuesday at the school's Gainesville campus when she heard her email ding.

"When I saw the subject line 'Vote for Trump or else!' I thought it was a joke," said the 21-year-old journalism major. "The first thing I did was panicked for a brief moment."

She said she then took a picture on her phone and sent it to her friends to see if anyone else received it. They did not.

"Then I panicked a little more," she said. But after searching the internet she learned she was not alone.

When asked if she was concerned about voting, the student said, "It still feels like this is just a joke."

"I am still going to vote," she said.

Separately, Facebook warned that fraudsters from Albania to Vietnam are posting about US politics and the upcoming presidential election to build fake audiences, maximise clicks and make money online.

In a new report about so-called "inauthentic behaviour" on its platform, Facebook said the November 3 election had become a common lure to trick users into visiting online stores or websites laden with pay-per-view adverts.

"If you are a financially motivated actor who's trying to make money based on clicks, you are going to use whatever content is going to get you eyeballs," Nathaniel Gleicher, Facebook's head of cybersecurity policy, told Reuters.

"And obviously, there's a lot of attention being paid to what's happening in the United States around the election."

After weathering fierce criticism over efforts by political and commercial groups to manipulate its users, Facebook now regularly announces takedowns of online influence operations – such as three networks tied to Russia which it said last month could be used to disrupt the US vote.

Gleicher said Wednesday's report differed from previous takedown announcements because it dealt with less threatening activity, which was usually financially rather than politically motivated but often confused with foreign interference attempts.

In an interview ahead of the report's release, he said he wanted to make a distinction between the two types of activity ahead of the US vote and next month's election in Myanmar, a country where the military and other groups have repeatedly been caught using social media to spread hate and disinformation.

"I want people to be aware of the full range of deception that is happening out there," Gleicher said. "One of the ongoing challenges is people so often and so regularly mistake a financially motivated scheme to sell T-shirts as an influence operation coming from a foreign government."

There is frequently crossover between the two types of activity, both of which deliberately mislead users with fake accounts and post about "hot-button" issues to build an audience, Facebook said in its report.

But the networks suspended on Wednesday were primarily schemes to amplify content for financial gain, such as by using fake accounts to boost follower numbers or by repeatedly posting spam-like content about popular topics.