Wales today hinted that it could yet axe Christmas ‘bubbles’ amid rising alarm at a surge in coronavirus cases.

Health minister Vaughan Gething refused to rule out a rethink saying the nation’s government could need to ‘make choices to keep people safe’.

However, Downing Street insisted the planned easing will go ahead in England despite warnings from scientists that it will fuel the outbreak.

Meanwhile, Nicola Sturgeon urged Scots not to take advantage of the relaxation, saying ‘just because we can visit people indoors over Christmas on a limited basis does not mean that we have to’. 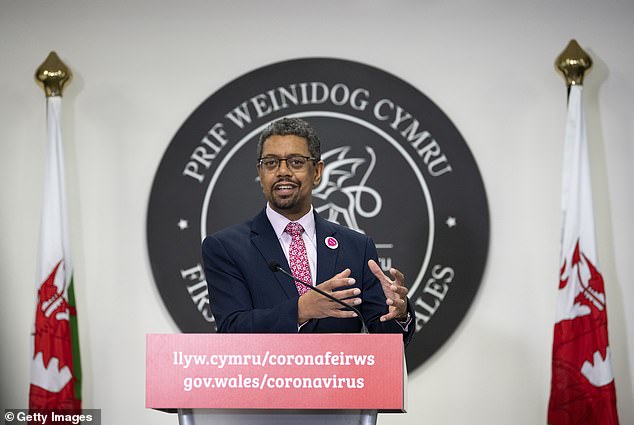 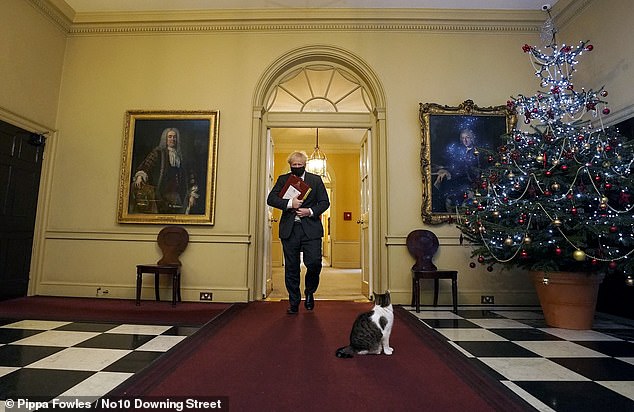 Downing Street insisted the planned easing will go ahead in England despite warnings from scientists that it will fuel the outbreak. Pictured, Boris Johnson by the Christmas tree in No10 last week

Concerns have been growing about the consequences of UK-wide relaxation, due to be in effect from December 23-27. Up to three households will be allowed to form a bubble and mix freely over the period.

Chief medical officer for Wales Dr Frank Atherton has issued a stark warning ‘to save lives now, don’t mix with other people’.

‘Don’t put yourself and your family at risk for the sake of tradition,’ he said on Monday.

At the Welsh government’s daily briefing, Mr Gething repeatedly dodged saying whether the easing could be dropped.

He said it was not the administration’s preference to change the rules, but added: ‘If the virus continues to grow, then we’ll need to make choices to keep people safe.’

In contrast, the Prime Minister’s official spokesman said No 10 was not reconsidering the relaxation.

‘There are no plans to review the Christmas guidance. What we’ve said alongside that is that the public should continue to be cautious,’ he said.

‘We’ve been clear that it’s a limited easement to allow families to bubble over the Christmas period after what has been a very difficult year for many people. But it remains important for the public to follow the guidance.’

He told a Downing Street briefing that just because limited mixing will be permitted ‘that doesn’t mean we should do things’ as he warned of a ‘very risky period’.

At her regular briefing, Ms Sturgeon said: ‘I want to remind everyone once again that just because we can visit people indoors over Christmas on a limited basis does not mean that we have to.’

She conceded Christmas could be one of the hardest periods in the coronavirus crisis for many, but advised people planning to meet other households that they should already be ‘thinking about reducing unnecessary contact’ with others.

She said this is ‘particularly the case’ for those planning to meet elderly relatives over Christmas.

‘This year I think it is the case that the best Christmas gift we can give family and friends is as far as possible to keep our distance and keep them safe,’ the SNP leader said. 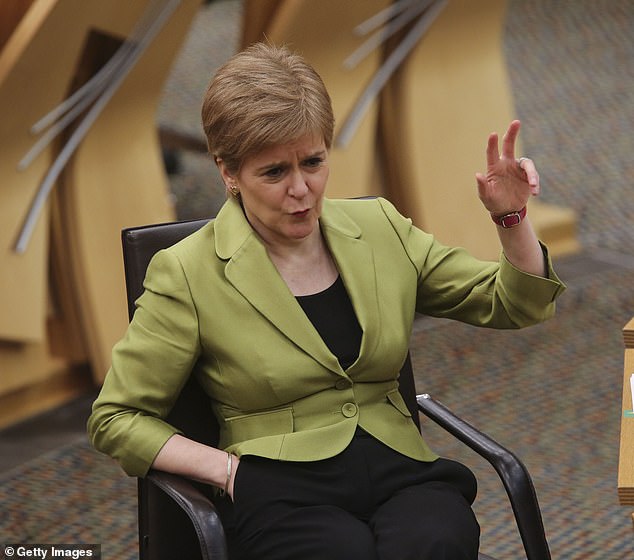 Nicola Sturgeon (pictured last week) has urged Scots not to take advantage of the relaxation, saying ‘just because we can visit people indoors over Christmas on a limited basis does not mean that we have to’

Professor Devi Sridhar today pointed to a surge in cases in the United States following Thanksgiving, suggesting plans should be shelved until vaccines are widely rolled out and immunity is built up.

The chair of global public health at Edinburgh University told ITV’s Good Morning Britain: ‘This is the worry about Christmas because once you enter somebody’s home, you’re probably going to get the virus if someone else there has it.’

She added: ‘NHS staff are exhausted, they are begging people to be cautious, to not get infected, because they’re the ones in the end who have to be showing up in hospital on Christmas Day, on Boxing Day and New Year’s and actually having to take care of everyone that comes through.’

Bristol University public health professor Gabriel Scally, also urged people to question whether it is sensible to meet indoors and said there should be ‘no hugging’.

However, public health professor Paul Hunter said gatherings were a ‘tolerable risk’, adding that shops and schools would be closed over the festive period and people will not be going to work, all driving down the risk of transmission.

‘It does carry with it a risk but looking at the other side of things, January is generally a very bad month for people’s mental health,’ the University of East Anglia academic said.

‘If being able to meet up in as safe a way as possible with your loved ones over Christmas gives you that extra strength to carry on until we’re able to get a lot more relaxed over spring, then I think that is a tolerable risk that I think we could accept.’