Air raid sirens sounded across Kyiv on Saturday as Russia stepped up a long-range bombardment of Ukrainian cities that has killed dozens in the last three days and wounded scores.

Earlier, Russian missiles hit the central city of Dnipro, killing three people and wounding 15, regional Governor Valentyn Reznychenko said on Telegram. Rockets hit an industrial plant and a street next to it, he said. Footage on social media showed thick black smoke rising from the buildings and burning cars. 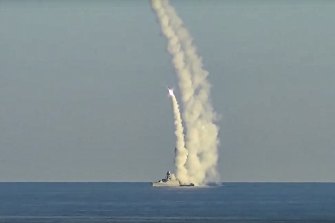 A long-range Kalibr cruise missiles launched by a Russian military ship from an unknown location on Friday.Credit:Russian Defense Ministry/AP

Eight people were killed and 13 injured in a string of shellings in 10 locations in the eastern region of Donetsk, Governor Pavlo Kyrylenko said in a television interview.

The attacks were the latest in a series of recent Russian hits using long-range missiles on crowded buildings in cities far from the front, each killing dozens of people.

Earlier Kalibr cruise missiles launched from a Russian submarine in the Black Sea hit an office building in Vinnytsia, a city of 370,000 people about 200 km south-west of Kyiv. Ukraine said the strike killed at least 23 people and wounded about 100.

Among the dead was Liza, a four-year-old girl with Down Syndrome, found in the debris next to a pram. Images of her pushing the same pram, posted by her mother on a blog less than two hours before the attack, quickly went viral. 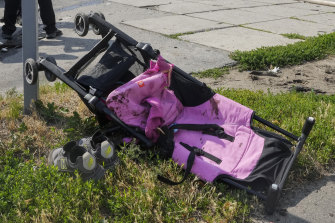 Blood stains are seen on a baby stroller after a deadly Russian missile attack in Vinnytsia, Ukraine, on Thursday.Credit:AP

Her severely injured mother, Iryna Dmitrieva, was being kept in an information blackout at a hospital for fear that finding out about her daughter would kill her, doctors said.

“She is suffering from burns, chest injuries, abdominal injuries, liver and spleen injuries. We have stitched the organs together, the bones were crushed as if she went through a meat grinder,” said Oleksandr Fomin, chief doctor at the Vinnytsia Emergency Hospital. Were she told of her daughter’s death, “we would lose her”.

Russia’s Defence Ministry has said the strike on Vinnytsia was directed at a building where top officials from Ukraine’s armed forces were meeting foreign arms suppliers.

Russia has repeatedly denied targeting civilian areas, despite mounting evidence that its missiles have hit residential areas across the country. The United Nations says thousands of civilians have been killed since Russia invaded Ukraine on February 24. Tens of thousands of combatants have also been killed. 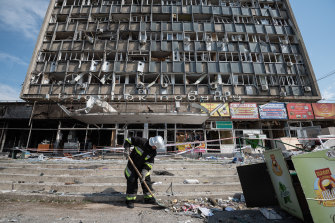 A rescuer clears away rubble by the heavily damaged office building in Vinnytsia, Ukraine, on Friday.Credit:Getty Images

Despite the bloodshed, both sides have described progress towards an agreement to lift a blockade restricting the export of Ukrainian grain. Mediator Turkey has said a deal could be signed next week.

Asked if that timeline was realistic, a senior Ukrainian official said: “We really hope so. We’re hurrying as fast as we can.” The official asked not to be identified.

Russia’s Defence Ministry said an agreement was close, but Moscow’s negotiator cautioned that a grains deal would not lead to a resumption of peace talks.

A deal would probably involve inspections of vessels to ensure Ukraine was not bringing in arms and guarantees from Western countries that Russia’s own food exports are exempt from sanctions.

The war dominated a meeting of G20 finance ministers in Indonesia. Two sources said the group was unlikely to issue a formal communiqué on Saturday. Russia is a member of the group, as are the G7 industrial powers, along with China, India and South Africa, among others.

Western sources had warned it would be difficult to agree on a communiqué – it usually describes a common set of goals – because the body works on consensus and Russia had blocked language about the cause of the economic downturn that has prompted the World Bank and International Monetary Fund to downgrade their forecasts.

“The G20’s capacity to act and communicate is very strongly hindered by the war in Ukraine, which one of the G20 members is fully responsible for,” a French Finance Ministry source said.

Russia calls its intervention a “special military operation” to disarm Ukraine and root out nationalists. Kyiv and its allies call it an unprovoked attempt to reconquer a country which broke free of Moscow’s rule in 1991.