We need political leaders who are ‘enlargers of life’

The most important reason for a contemplative practice like meditation or mindfulness is that it taps into a deep spring of love and compassion. Jesus called it “living water”. Thomas Aquinas said God is compassion and that “compassion is the fire that Jesus came to set on the earth”.

Compassion is a natural outpouring of love which yearns to be shared, if it is authentic. Aquinas also said: “Love brings it about that lovers are directed not only toward themselves, but also toward others.”

In commenting on this in his book, Christian Mystics, theologian Matthew Fox writes: “Love expands. Love is inclusive. It enlarges the soul; it enlarges one’s actions, one’s politics, one’s economics, one’s thoughts. Love is not self-serving or exclusive. It expands consciousness and births imagination, it struggles for justice, it stands in solidarity, it dares, it fights, it blossoms into compassion.”

Australian historian Manning Clark famously said that there are two types of political leader: “the enlarger of life” and the “punisher and straightener”.

We are in urgent need of political leaders who are “enlargers of life”, who have enlarged souls and an expanded consciousness that can “blossom into compassion” and enlarge their actions, politics and economics.

Without leaders of this kind, more and more people will suffer – and not only people. It’s estimated that nearly 3 billion animals died or were displaced in the devastating bushfires that destroyed 20 per cent of forests on the Australian mainland in 2019-20. An enlarged political vision must include care for the Earth and all its creatures, and a clear determination to deal with the causes of climate change.

Without drinking from the spring of Living Water, souls shrivel and visions narrow, so that suffering and injustice increase for many.

We see the young struggling to find a foothold on the ladder to owning their own home and becoming slaves to debt when they do; and the unemployed punished by grossly inadequate levels of welfare support.

And then there are appalling acts of cruelty, such as the threat of deportation which hangs over disabled boy Kayaan Katyal and his parents Varun and Priyanka. Varun came to Australia from India 12 years ago and was joined by Priyanka eight years ago after they married. Six years ago, Kayaan was born with cerebral palsy. 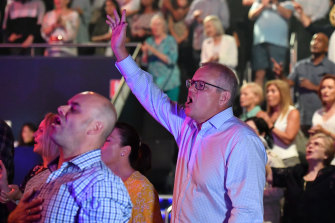 Prime Minister Scott Morrison during an Easter Sunday service at his Horizon Church at Sutherland in Sydney in 2019.Credit:AAP

Australia’s Migration Act allows families who aren’t permanent residents to be deported if their children have a disability.

I can only pray that Prime Minister Scott Morrison, who openly talks about his Christian faith, will find mercy in his heart for Kayaan and his parents, and others like them, and move to amend the legislation.

Without political leaders who nurture a deep inner life focused on truth and goodness, compassion and justice, the common good will wither and die, and with it civilisation.

Roland Ashby is a Melbourne writer.