Menopausal women working for the NHS will be allowed to work from home if their symptoms require it.

Amanda Pritchard, chief executive of NHS England, said ‘flexible working patterns’, which may include lighter duties, will be considered for women struggling with symptoms.

The first-ever NHS guidance on menopause instructs employers to consider ‘any reasonable adjustments to their working pattern’.

Miss Pritchard wrote in the Daily Telegraph that female employees who were ‘silently suffering’ should not be expected to just ‘grin and bear it’. 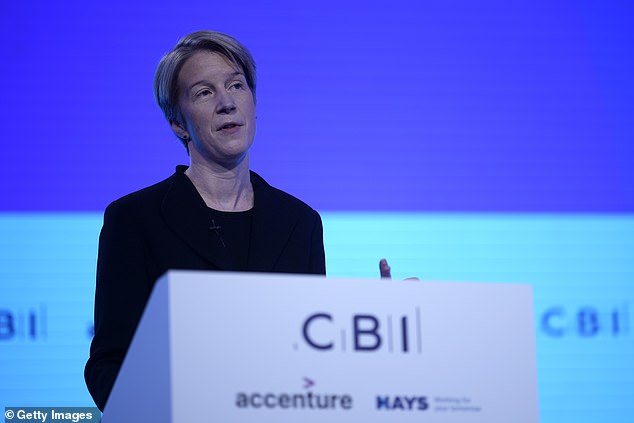 Amanda Pritchard (pictured), chief executive of NHS England, said ‘flexible working patterns’, which may include lighter duties, will be considered for women struggling with menopause

‘Menopause is not a health condition, it’s a stage of life, and I want all women facing this transition in the NHS to have access to the right support to stay in and thrive at work,’ she wrote.

‘Women approaching or going through menopause should not have to put up with feeling uncomfortable at work, or feel any shame in talking about a transition which is simply a part of life.’

The NHS is the largest employer of women in Britain, with one million of its 1.3million staff being female.

Miss Pritchard said that women aged between 45 and 54 make up a fifth of the health service’s total workforce.

She has also called for menopausal women to be offered cooler uniforms and fans at work.

Launching the guidance on menopause, Miss Pritchard told the Confederation of British Industry conference (CBI) in Birmingham she hoped the health service would lead the way for other employers.

She urged all employers to support staff who have symptoms such as hot flushes.

‘While some local teams are already implementing initiatives to support women experiencing menopausal symptoms – simple steps like flexible working, fans to help with more comfortable temperatures, cooler uniforms and staff training – I want to see this happening right across the board.’