Home » World News » Which state has removed the most Confederate symbols during nationwide protests?

Which state has removed the most Confederate symbols during nationwide protests? 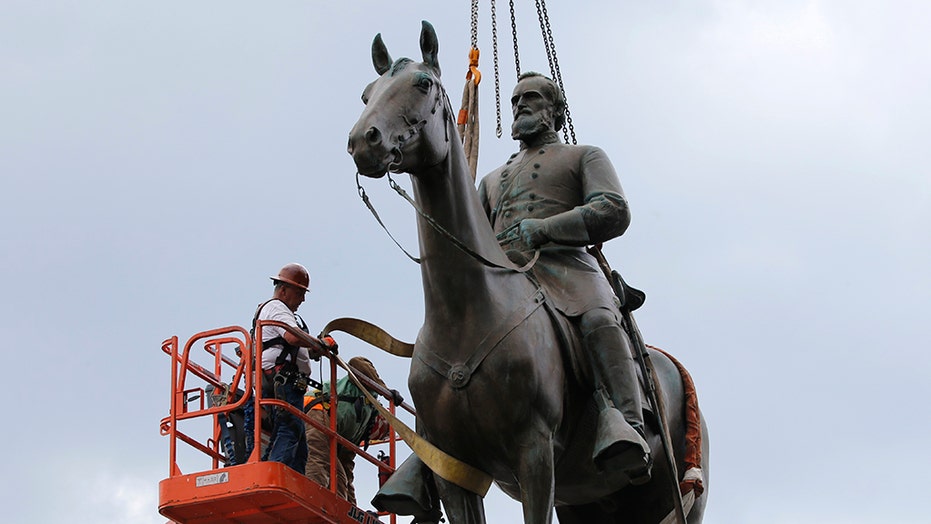 More than 100 Confederate symbols were removed from public display amid protests following the death of George Floyd in Minneapolis police custody in May, according to the Southern Poverty Law Center.

Of the 102 symbols taken down since then, 40 were in Virginia. Richmond, the former capital of the Confederacy, was home to a number of statues that the mayor and governor ordered removed over the summer.

The states with the next largest removal numbers were North Carolina, with 18, and Texas, at 10. No other state was in the double digits. 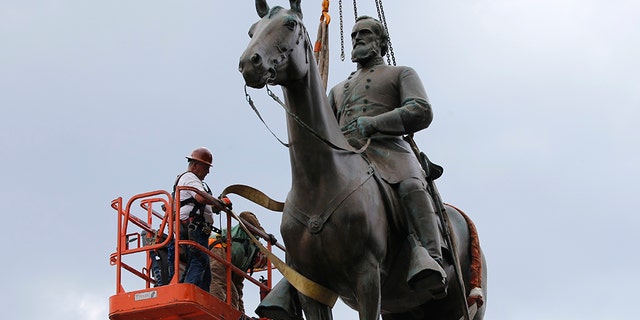 Work crews remove the statue of confederate general Stonewall Jackson, July 1, in Richmond, Va. Richmond Mayor Levar Stoney has ordered the immediate removal of all Confederate statues in the city, saying he was using his emergency powers to speed up the healing process for the former capital of the Confederacy amid weeks of protests over police brutality and racial injustice. (AP Photo/Steve Helber)

“Confederate symbols revere a secessionist army that fought to preserve the institutions of slavery and white supremacy,” Lecia Brooks, the SPLC’s chief of staff, said in a statement. “They are painful monuments to anti-Black racism that have no place in public spaces.”

Symbols can include monuments, statues, and the names of school buildings that “celebrate the Confederacy” – but only on public land, according to the SPLC. The organization doesn’t track Confederate installations “in graveyards, battlefields, private property or those erected in the spirit of reconciliation.” 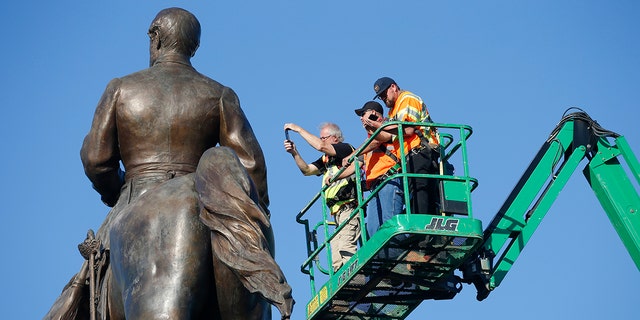 An inspection crew from the Virginia Department of General Services inspect the statue of Confederate Gen. Robert E. Lee on Monument Avenue June 8, in Richmond, Va. Virginia Gov. Ralph Northam has ordered the removal of the statue. (AP Photo/Steve Helber)

Floyd was killed in police custody after an officer kneeled on his neck for nearly 9 minutes. It was recorded, then circulated widely online and prompted immediate backlash – including several nights of rioting in a handful of cities and recurring peaceful protests across much of the country.

Many of the removals came shortly after the widespread protests  – 38 each in June and July. August saw 13 removals, and there were 12 more in September. So far in October, there has been one.

Comparatively, 142 symbols were removed in the five years prior, when the SPLC began tracking such data. It started after a White supremacist killed nine Black worshippers inside a Charleston, S.C., church.

Also this year, the Pentagon moved to ban Confederate flags at all military installations.