Turf war! Wildlife campaigners call for BAN on artificial lawns amid concern for birds and insects

Wildlife campaigners are calling for a ban on ‘environmentally irresponsible’ artificial grass used in British gardens over fears it can harm animals and cause flooding.

Critics say the fashionable ‘astroturf’ lawns are detrimental to birds and insects but advocates argue it is a low-maintenance way to brighten up a garden.

Yesterday the row escalated after a petition was sent to the Government calling for the plastic grass to be outlawed. 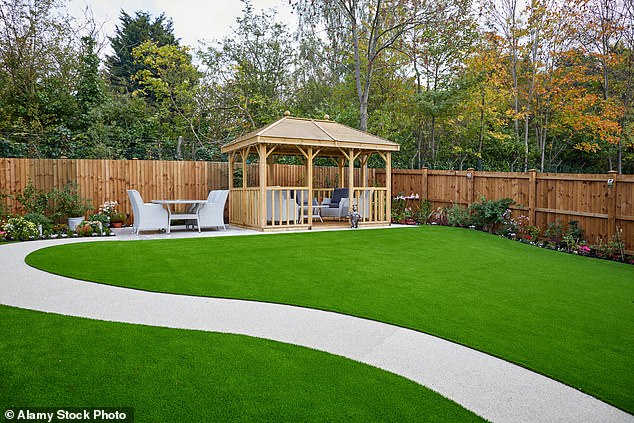 More than 3,000 people have signed a petition to have artificial lawns banned because of their flood risk and impact on garden wildlife

As of last night, it had attracted more than 3,000 signatures.

The petition read: ‘The sale of artificial grass should be banned in the UK for environmental reasons.

‘It is environmentally irresponsible to allow garden space occupied by grass and other plant life (which processes CO2 and supports wildlife) to be replaced by plastic which does not biodegrade.’

Among those supporting the campaign include biology professor Dave Goulson.

The Sussex University academic says that while it is socially unacceptable to get single-use plastic bags at supermarkets, Britons are covering much larger areas in plastic which becomes unhygienic as it ages and will be in landfill after a few years.

The artificial grass also contributes to flooding as it does not absorb water.

And as it breaks down it releases plastic particles into the environment.

But BBC Radio 4 presenter Mishal Husain and Woman’s Hour’s Jane Garvey defended their use of the turf.

Miss Garvey said before buying the plastic ground covering her outdoor space was a ‘muddy mayhem’.

She added: ‘I didn’t really have a garden, I had a backyard, that was really horrible, really hard to maintain, and didn’t look great. This looks much better.’

Miss Husain said the astroturf was ‘a great all-weather surface for cricket and football’ for her sons.

John Terry, the former England football captain, spent a reported £150,000 on an artificial lawn for his £4.3million, nine-bedroom Surrey mansion.

But on the Today Programme yesterday Professor Goulson laid into those looking for a quick fix for their garden and said artificial grass should require planning permission, a policy position adopted by the Green Party.

‘There is no compelling reason why anyone should have plastic grass,’ he told the Mail.

She wrote: ‘Plastic lawns are toxic to humans and wildlife. The plastic particulates they release are dangerous, they contribute to the heating of the planet and when they are filthy with cat and bird poo in a few years they end up in landfill for hundreds of years. The opposite of nature and natural.’