Wins show ‘progressives in the ascendancy within the Democratic party’

Chicago: Progressive Democrats celebrated two primary victories on Wednesday, claiming the protests over George Floyd’s death and a renewed focus on racial and economic justice have given their candidates new momentum after some rough patches this year.

Michigan Representative Rashida Tlaib, a member of the “squad” of four first-term congresswomen of colour who have drawn attention for their liberal views and distaste for President Donald Trump, scored a convincing victory over Detroit City Council President Brenda Jones. 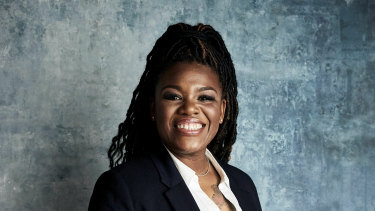 Cori Bush’s primary victory shows the power of progressives within the Democratic Party.Credit:AP

Jones had criticised Tlaib as being too divisive. There also was a stunning win Tuesday by Black Lives Matter activist Cori Bush over longtime Representative William Lacy Clay in a St. Louis area district.

Both Tlaib and Bush, who says she was beaten while protesting the death of black 18-year-old Michael Brown by a white officer in Ferguson, Missouri in 2014, had support from multiple national progressive organisations.

They have rejected corporate political action committee money and called for greater action on climate change, “Medicare for All” and more police accountability. They framed their victories as wins for working people and those who have taken to the streets in recent weeks to demand more than incremental change.

“We are at a turning point in this country as we face down unprecedented crises,” Bush said in a victory speech. “Y'all, we about to change the world.” 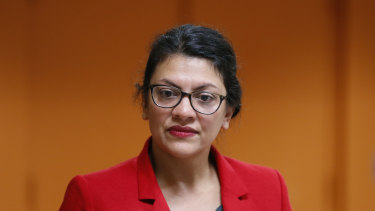 Beyond signalling momentum, the victories are giving progressives confidence about two upcoming tests. Next week, squad member Representative Ilhan Omar of Minnesota will face a challenge from a well-funded opponent, Antone Melton-Meaux. On Sept. 1, progressive Alex Morse, the 31-year-old mayor of Holyoke, Massachusetts, will try to knock off Representative Richard Neal, one of the most powerful House Democrats.

The year did not start out on such a positive note.

Senator Bernie Sanders, a democratic socialist whose 2016 presidential bid mobilised progressives, dropped out of the Democratic presidential primary in April after a series of losses to former Vice President Joe Biden, an establishment candidate who said policies like Sanders’ Medicare for All went too far.

In March, a party-backed favourite easily defeated a progressive hopeful in Texas’ Democratic Senate primary. Representative Henry Cuellar, one of Congress’ most conservative Democrats and was a top target of progressive groups such as Justice Democrats, also won his primary.

But there were other notable triumphs, especially in the weeks after Floyd’s killing in Minneapolis in May sparked global protests.

In March, Marie Newman knocked off Illinois Representative Dan Lipinski, an abortion opponent who compared progressive Democrats to a “tea party of the left."

While progressives “are going to win some and lose some,” former Sanders campaign manager Faiz Shakir said progressive candidates and their ideals are becoming more popular, and forcing change within the party.

“Progressives are in the ascendancy within the Democratic party, there's no doubt about it,” said Shakir, who is now an adviser to Sanders and to the political action committee Fight Corporate Monopolies, which ran ads blasting Clay for being too cozy with corporate America.

Waleed Shahid, spokesman for Justice Democrats, said Bush — who lost to Clay by 20 percentage points in 2018 — was aided this time by a much bigger coalition of progressive supporters and the increased popularity of the Black Lives Matter movement.

“The future of the Democrat party looks a lot more like the squad, and the squad is here to stay,” Shahid said.

In Detroit, Andrew Bryant said he voted for Tlaib because she has been outspoken on behalf of the city's working class and poor, and especially against water service shut-offs for people unable to pay their bills. The 71-year-old said he's among the many Black voters who have seen the Black Lives Matter movement against police brutality grow, and believe the time is now to show their power to enact change.

“We need to get out and vote our opinion,” he said while voting at a church on Detroit's west side Tuesday morning. “It’s important for us as Black people because it seems we’ve been dealt the short stick … for the longest time, and it’s our turn to speak up and be represented.”

On Twitter, Tlaib scoffed at headlines leading up to the primary that called her the most vulnerable squad member.

“My community responded last night and said our Squad is big,” she said. “It includes all who believe we must show up for each other and prioritise people over profits. It’s here to stay, and it’s only getting bigger.”