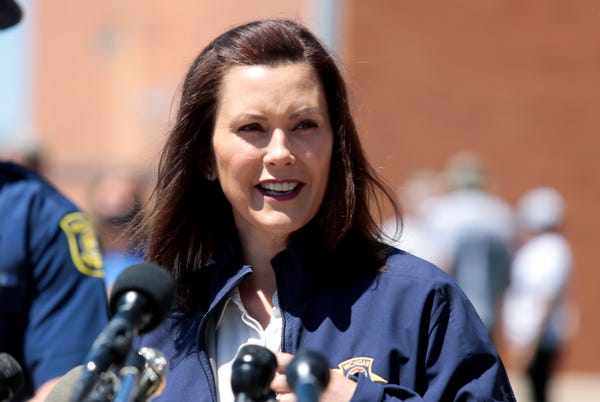 Six months before the FBI dismantled what they say was a plan by an armed so-called militia group to kidnap the Michigan Gov. Gretchen Whitmer, President Donald Trump tweeted out a call to "LIBERATE" the state.

FBI Special Agent Richard Trask testified Friday, though, that the group of men who called themselves the "Wolverine Watchmen" started planning their violent conspiracy before Trump's comment on Twitter.

More than a dozen people face state and federal charges, including conspiracy to kidnap and terrorism-related offenses.

They are accused of organizing in encrypted chat groups, meeting at various locations to train with weapons, and attempting to acquire explosives.

Prosecutors say several of the men got into cars and cased Whitmer's home on two occasions. There was a plan to blow up a bridge nearby, and talk of harming or killing any police who got in their way.

During a pretrial hearing in Grand Rapids on Friday, defense attorney Gary Springstead asked Trask how the defendants felt about Trump's tweet in April.

The special agent said he wasn't aware, but that "Discussions of (the plan) happened prior."

Whitmer drew the ire of far-right and right-wing protesters after she ordered a lockdown in her state earlier this year as COVID-19 spread in the US. Many Michiganders expressed anger at Whitmer's executive order on social media and in nearly 1,200 emails to Business Insider.

In late April, hundreds of protesters converged on the state's capitol to protest Whitmer's extension of a stay-at-home order.

Some involved in the plot to kidnap Whitmer called her a "Tyrant b—-," according to an affidavit.

"Snatch and grab, man. Grab the f—in' governor. Just grab the b—-." prosecutors say one of the leaders of Wolverine Watchmen told an undercover informant. "Because at that point, we do that, dude — it's over."

Following the arrests, Whitmer has criticized Trump for being "complicit" in extremist violence in the US.

An advisor for President Donald Trump's reelection campaign attacked Whitmer in response and said, "If we want to talk about hatred, then Gov. Whitmer, go look in the mirror — the fact that she wakes up every day with such hatred in her heart for President Trump."

In an op-ed for The Washington Post, Whitmer doubled down on her criticisms and said that Trump's divisive language is a call to action for hate groups.

"When our leaders encourage domestic terrorists, they legitimize their actions," she wrote. "When they stoke and contribute to hate speech, they are complicit. And when a sitting president stands on a national stage refusing to condemn white supremacists and hate groups, as President Trump did when he told the Proud Boys to 'stand back and stand by' during the first presidential debate, he is complicit."