The woman who was sexually assaulted by former NRL star Jarryd Hayne has told a court she was destroyed and damaged by the experienced but “I’m still standing”.

Hayne, 33, was convicted in March of two counts of sexual intercourse without consent after he assaulted a 26-year-old woman in her Newcastle home with his hands and mouth and left her bleeding from the genitals in September 2018. 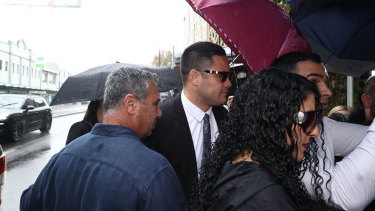 Jarryd Hayne walks into court on Thursday as his supporters attempt to shield him with umbrellas.Credit:Dominic Lorrimer

He was found guilty of the charges after a second trial in the NSW District Court, with an original trial last year ending in a hung jury. Judge Helen Syme described his prospects of jail as inevitable.

On Thursday, the woman Hayne assaulted walked quietly into court supported by police and several others, ready to relay her experience since 2018. When Hayne arrived, a group of his supporters attempted to shield him with umbrellas on the way into the court building, jostling with photographers and camera operators.

In a victim impact statement, read out as a detective sat next to her, the woman said the incident has affected her “mentally, physically, socially and academically” and no one will ever fully understand the extent of her feelings.

“I felt dirty and violated. He made me feel like an object and was looking straight through me,” the woman said. 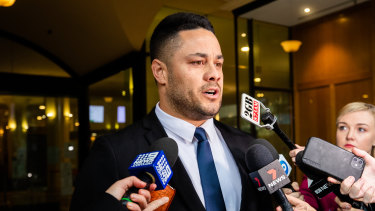 Jarryd Hayne leaves court after being convicted in March.Credit:Edwina Pickles

“My vagina was stinging in a throb-like sensation and I couldn’t understand or fully comprehend that he had just done that to me. I sat on my bed hugging my knees and staring into nothingness.”

The woman said she sometimes gets a “sickening feeling” about that night and experiences flashbacks of Hayne’s face looking right through her, stress which has made her unable to work for six months and to stop her university studies.

“My body remembers and my mind won’t let me forget,” she said.

The woman said she made the mistake of reading what people were saying about her on social media, and “wanted to scream” and set everyone straight.

“The anger, frustrations and feeling of wanting to die was so strong,” she said. “People talk about my vagina, my choices, and like to give their opinions based on what they’ve heard, and it is the most helpless feeling.

“No matter what happened before or after the assault … no means no.”

The woman said she has not been eating and is a shadow of herself, with the assault taking away her privacy and making her question her own worth. She said “you don’t owe someone your body, nor should they expect it”.

“What I experienced was horrible. Nobody should ever have to feel that way,” the woman said. “I’m destroyed and damaged but I’m still standing.”

The trial heard Hayne had been speaking to the victim on social media for a few weeks, but they met for the first time when Hayne – who was in Newcastle for a buck’s weekend – stopped at her house on the evening of September 30, 2018, on the way back to Sydney.

He arrived at her home at 9.07pm and left his $550 taxi waiting outside, telling the driver he needed to pick up a bag. He left 46 minutes later.

In her evidence, the woman said when she discovered the taxi waiting outside she did not want to have any sexual contact with Hayne, but he did not stop his advances and pulled down her pants despite her protests of “no”.

“I think I froze in a way, because I can’t remember a massive struggle; it was just really confusing. But he knew I didn’t want it – I said ‘no’,” the woman told the trial.

In one message, sent shortly after the incident, the woman told a friend Hayne had been “so rough that blood started pouring all over the bed because he tore my vagina”.